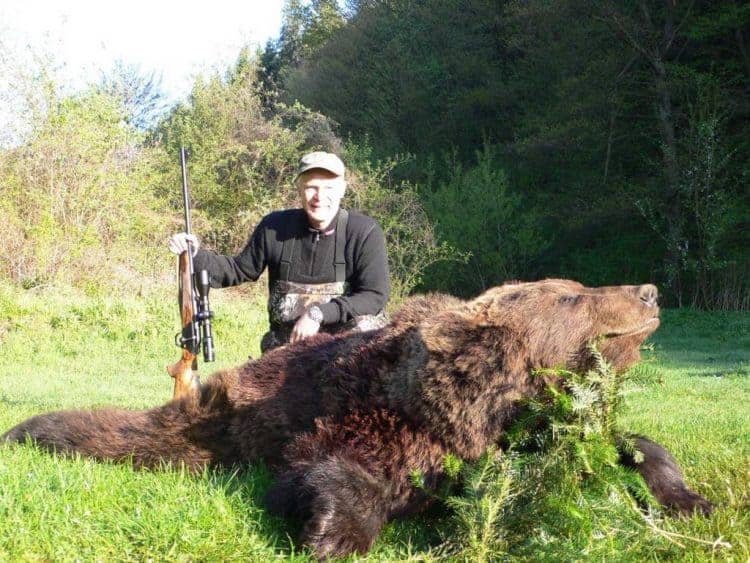 On August 7, footage surfaced in international media of brown bears “besieging” a Romanian village. The clip shows the animals scavenging for food in trash bins, walking through the town, and running past bewildered pedestrians.

Unfortunately, images like these can invoke fear among the public and play very well into the hands of those who seek to justify the slaughter of bears (and other carnivores) in Romania.

The relationship between these predators and humans has always been complex; on the one hand, they are vilified in folklore (i.e. the wicked wolf in the “Little Red Riding Hood”) and on the other are depicted with curiosity rather than fear (i.e. the three bears in “Goldilocks”).

Sadly, the former narrative seems to be prevailing as the Romanian Ministry of Environment is slated to sign an order permitting the lethal take of 140 brown bears and 97 wolves. The trophy hunting industry, which wants to guide foreign hunters on lucrative hunting trips for huge sums of money, desperately wants to play a part in the killing.

A much needed but apparently short-lived reprieve for these animals came in October of 2016 when the Romanian government announced a prohibition on the trophy hunting of brown bears, wolves, lynx, and wild cats. This decision saved at least an estimated 1,700 animals. Yet less than a year later, undoubtedly in response to heavy lobbying efforts from the livestock ranching and trophy hunting industry, the Ministry of Environment is poised to lift part of this ban.

Although an EU law known as the Habitats Directive prohibits the hunting of all four species, it also allows for “derogations” (i.e. lethal measures) in cases of threats to human safety and property. Such derogations are the golden ticket for resentful livestock owners and trophy hunting businesses. For them, the solution is clear: strike fear into the hearts of the public against Europe’s large carnivores. Romania is not the only battlefield where this is playing out, with countries like France, Norway, and others using controversial lethal population control.

Bears and wolves are particularly susceptible to selective removal because they invest heavily in just a few offspring and disruption of social stability (i.e. when family members are killed) can seriously undermine survival rates. These animals already face an endless barrage of threats like continued incursion of humans into their habitat, climate change, and reduced prey availability. Adding human persecution into this deadly mix is “super additive,” meaning the ultimate harm to the population is far greater than the killing of just one “problem” individual.

Ironically, such ruthless persecution of Europe’s last remaining wild carnivores in the name of reducing conflicts will likely have the reverse effect, only increasing threats to safety, livestock, and property. Why? The answer lies in the social dynamics of these animals. With wolves, for example, packs reduced in size may become less efficient as hunters, thus necessitating an increased number of attacks on livestock. Further, wolves may compensate for loss of the pack by intensifying reproduction and requiring more food to feed their young. On the other hand, selective killing of individual wolves may be devastating for wolf population dynamics because it eliminates key breeders, changes the packs’ evolutionary potential, and thus increases the risk for population extinction.

So what is the solution if not lethal culling or hunting? Co-adaption and coexistence are key if carnivores are to persist. Humans must be willing to share the habitat and tolerate the small level of risk these animals pose. Even a child understands that bears are attracted to food, which is why communities in bear habitat must have bear-proof waste management (not currently the practice as revealed in last week’s video where rubbish bins are completely open). Varieties of audio and visual deterrents are also widely available.

When it comes to livestock depredation, a selection of non-lethal methods such as range riders (individuals that supervise the herd), electric fencing, and fladry (a line of rope mounted along the top of a fence, from which strips of fabric or colored flags are suspended), have proven much more effective than lethal measures.

Romania must hold strong in its commitment to protect brown bears, wolves, lynx, and wild cats. Yes, the pressure from special interest groups may be high but the stakes are even higher. These carnivores are key to Europe’s ecosystem and the declining health of these populations will have far-reaching and devastating impacts. So the answer is not to kill, but instead maintain a ban on the killing of Romania’s wild carnivores.

Masha Kalininais an International Trade Policy Specialist with Humane Society International (HSI). Specializing in wildlife trade, Ms. Kalinina advocates for strong wildlife protections for a variety of animals under the environment chapters of free trade agreements, the Convention on International Trade in Endangered Species of Wild Fauna and Flora, the U.S. Endangered Species Act, and the International Polar Bear Forum, among others. Ms. Kalinina also leads the HSI campaign to end the inhumane and unsustainable practice of trophy hunting. Prior to HSI, she worked for Booz Allen Hamilton providing consulting services for U.S. government clients. Ms. Kalinina earned her Bachelor of Business Administration (BBA) from The George Washington University and her law degree from the William and Mary School of Law.

Gabriel Paun’s biois a Romanian biologist and President of the nature conservation nonprofit, Agent Green. He has B.Sc. in Ecology and M.Sc. in Ecotourism. His previous work experience includes Greenpeace, Four Paws, Animals International, among others. For many years Gabriel has campaigned for forest protection, working to ban logging in National Parks and to protect Europe’s last intact forest landscape. In 2009, he founded Agent Green. Agent Green investigates and exposes environmental crimes, while promoting solutions for the preservation of nature to ensure the well-being of future generations. For his extensive work in protecting Europe’s forests and nature, Gabriel received the EuroNatur Award in 2016.

This article was first published by National Geographic on 15 Aug 2017.

We invite you to share your opinion whether the trophy hunting of bears and wolves should be banned? Please vote and leave your comments at the bottom of this page.