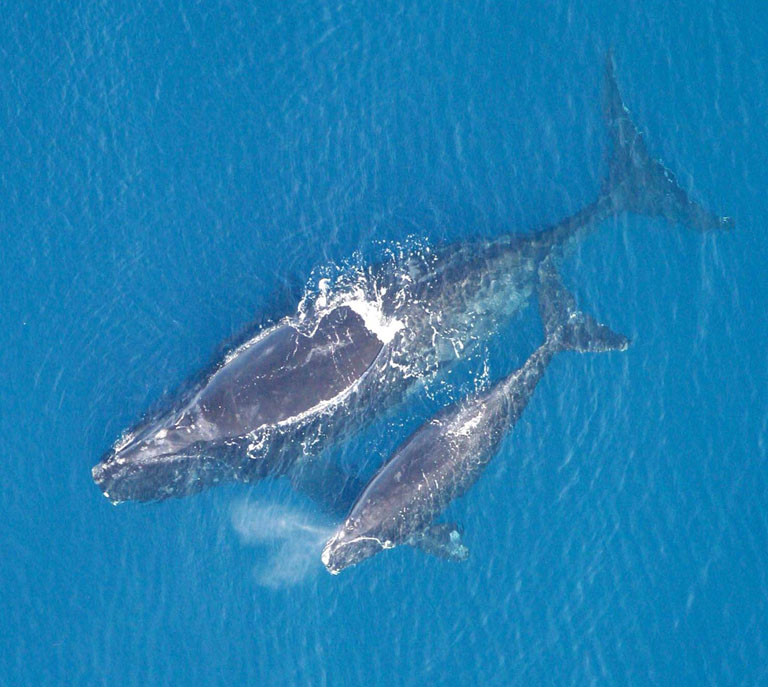 The Trump Administration announced today that it will issue five Incidental Harassment Authorizations (IHAs) for airgun blasting off the Atlantic coast.

The US National Oceanic and Atmospheric Administration (NOAA) stated: “In accordance with the regulations implementing the Marine Mammal Protection Act (MMPA) as amended, notification is hereby given that NOAA Fisheries has issued incidental harassment authorizations (IHA) to five separate applicants to incidentally harass marine mammals during geophysical survey activities in the Atlantic Ocean.”

Seismic airgun blasting is used to search for oil and gas deposits deep beneath the floor of the ocean. Offshore oil and gas exploration has not been permitted in the US’ Atlantic waters since the US Congress effectively banned drilling in the eastern Gulf of Mexico and off the Atlantic and Pacific coastlines in the early 1980s, though that Congressional ban has since expired.

There is fierce opposition to the opening of publicly held offshore waters to exploitation by oil and gas companies up and down the US Atlantic coast. Numerous businesses, municipalities, local and state elected officials, and federal legislators have spoken out against the Trump Administration’s moves to allow drilling off the Atlantic coast.

Environmentalists were quick to decry the Administration’s decision to issue the IHAs on the grounds that marine mammals will face severe threats as a result of seismic testing in the Atlantic Ocean. Michael Jasny, director of the Marine Mammal Protection Project at the Natural Resources Defense Council (NRDC), also pointed out the irony of the Trump Administration green-lighting offshore drilling within days of NOAA issuing its latest National Climate Assessment, which noted that global warming is already threatening “Americans’ physical, social, and economic wellbeing.”

“Just one week after issuing dire warnings on the catastrophic fallout of climate change to come, the Trump Administration is opening our coastlines to for-profit companies to prospect for oil and gas — and is willing to sacrifice marine life, our coastal communities and fisheries in the process,” Jasny said in a statement. “This is the first step towards drilling and scientists warn that seismic activity alone could drive the endangered North American right whale to extinction. We’ll stand with citizens, coastal businesses, scientists, lawmakers, and commercial and recreational fishermen who oppose seismic blasting, and we will fight this illegal action.”

The move to open vast areas of US waters to drilling has been expected from the Trump Administration for some time. In April 2017, Trump issued an executive order regarding his “America-First Offshore Energy Strategy” that proposed all US waters be considered for offshore drilling. The executive order directed federal agencies to “streamline” the permitting process for “seismic research and data collection” and “expedite all stages of consideration of Incidental Take Authorization requests, including Incidental Harassment Authorizations and Letters of Authorization, and Seismic Survey permit applications,” which are required under the Outer Continental Shelf Lands Act and the Marine Mammal Protection Act.

Subsequent to Trump’s executive order, Secretary of the Interior Ryan Zinke issued a secretarial order that enjoined NOAA’s Bureau of Ocean Energy Management (BOEM) to reverse a previous decision, made in the final days of the Obama Administration, that denied permits for seismic surveying activities off the Atlantic Coast on the grounds that it was too risky. 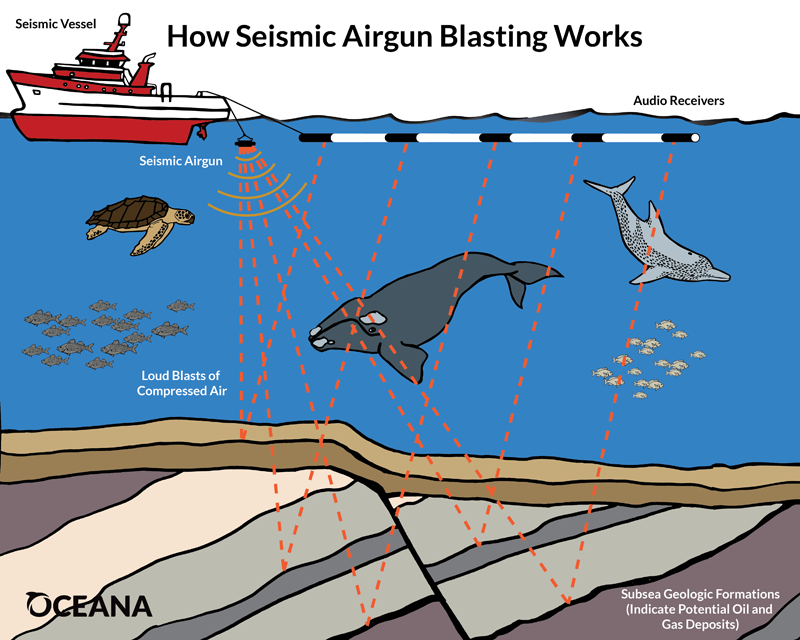 Seismic surveying involves ships towing airgun arrays that continually blast intense bursts of compressed air into the water every 10 to 12 seconds as a means of determining what resources might lie beneath the ocean floor. These seismic airguns are so loud that the noise can travel as many as 2,500 miles underwater. According to the NRDC, the seismic survey process can disrupt foraging and other crucial behaviors in endangered whales, displace fish, injure and kill invertebrates like zooplankton and scallops, and harm commercial fisheries. The group has posted an audio sample of seismic blasting here.

BOEM’s own research has found that seismic airgun blasting off the Atlantic coast could injure as many as 138,000 marine mammals, including the critically endangered North Atlantic right whale, and disrupt the lives of millions more marine animals. That’s why companies seeking to prospect for oil and gas under the Atlantic Ocean must first procure an IHA from the National Marine Fisheries Service (also known as NOAA Fisheries).

The authorizations issued to five companies today require a variety of measures to reduce the impacts of seismic survey activities on marine mammals, including observers onboard survey vessels to notify operators when a protected species is within a certain distance of the airgun arrays and operational restrictions intended to address impacts to sensitive species in their preferred habitats.

In response to the announcement of the IHAs being issued, the NGO Oceana launched an interactive map to track seismic survey vessels using the Global Fishing Watch platform’s technology.

“If these companies are allowed to begin seismic airgun blasting, our map gives the public near real-time access to the precise locations of vessels so that they know when, where and if these activities begin off our coast,” Diane Hoskins, campaign director at Oceana, said in a statement. “This interactive map is a powerful tool in the fight to protect Atlantic communities from offshore drilling.”

Once seismic surveys have found potential oil and gas deposits, the next step would be for companies to confirm the presence of those hydrocarbon resources via exploratory drilling — which is what BP’s Deepwater Horizon rig was doing when it exploded in the Gulf of Mexico in 2010, causing one of the worst oil spills and environmental disasters in U.S. history.

“This action flies in the face of massive opposition to offshore drilling and exploration from over 90 percent of coastal municipalities in the proposed blast zone,” Hoskins said. “These permits were already denied because of the known harm that seismic airgun blasting causes. President Trump is essentially giving these companies permission to harass, harm and possibly even kill marine life, including the critically endangered North Atlantic right whale — all in the pursuit of dirty and dangerous offshore oil. This is the first step toward offshore drilling in the Atlantic and we’re going to make sure coastal communities know what’s happening and fight this.”

This article by Mike Gaworecki was first published on Mongabay.com on 30 Nov 2018.

We invite you to share your opinion whether the Trump Administration should authorize oil and gas exploration off the Atlantic coast? Please vote and leave your comments at the bottom of this page.

Should Trump do anything,really? I think is better for him to stay put alongside his administration.When they do something it turns out to be a toal disaster!

NO and NO AGAIN !

I vote NO!
We, as American citizens & supposed voters, should be ashamed that we have allowed this kind of profit & greed to be in charge of our government! Anyone who decided not to vote in the 2016 election is just as guilty of allowing this kind of corruption to take hold, as are the people who voted FOR it.
I hope & pray that this is a wake up call – because if not, all of our natural world will be gone forever.