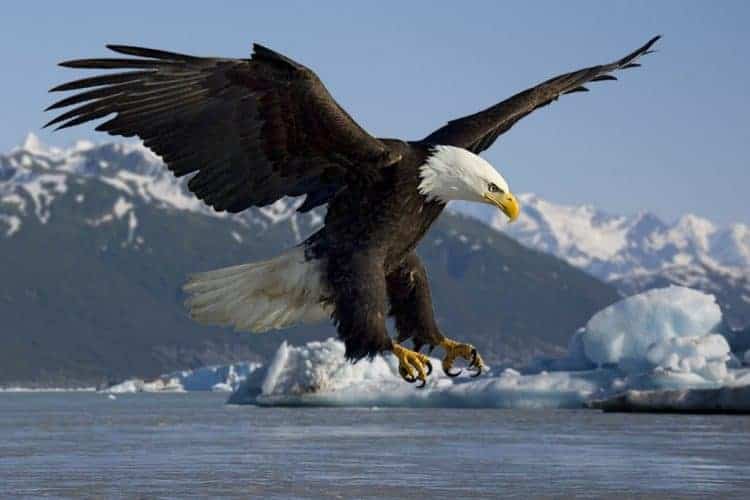 His head twisted almost upside down and his body all but paralyzed, the bald eagle sat on its haunches, talons clenching, while two humans neared to put him in a cage. They could not save the bird from lead.

The eagle was the third this year to die from lead poisoning at the Blue Mountain Wildlife center, in north-east Oregon, where Lynn Tompkins has helped rehabilitate sick and injured birds for 30 years. “They eat things that have been shot,” Tompkins said, “whether it’s big game like deer or elk or coyotes or ground squirrels.”

One of the recent eagles, Tompkins said, had 622 micrograms of lead per deciliter of blood in its body, and a second had 385. The Centers for Disease Control recommends immediate medical intervention for children whose blood tests at 45. Many birds, Tompkins said, test at 5-10 micrograms, “too low to show symptoms, but the same level of lead seen in the kids in Flint, Michigan”.

“The short answer is that no level of lead is acceptable for living things – eagles, condors and people,” said raptor biologist Glenn Stewart.

Bald eagles have rebounded across the US since 1972, when the government banned the pesticide DDT. But 10-15% of bald eagles die in the first year because of lead poisoning, Stewart said, in part because the young birds almost exclusively eat carrion.

An bald eagle that died from lead poisoning in north-east Oregon this month, after testing found it had 385 micrograms of lead per deciliter of blood in its body. Photograph: Lynn Tompkins

Last week, nearly 30 doctors and scientists sent a letter to the department of the interior to “strongly support” a rule that Ryan Zinke, Donald Trump’s new interior secretary, revoked on his first day in the post. The rule, enacted by the Obama administration on its last day, would have banned lead ammunition across 150m acres of national wildlife refuges.

“It worries me to think about hunting and fishing becoming activities for the land-owning elite,” Zinke said.

On the other side of the spectrum, Jonathan Evans, senior attorney at the Center for Biological Diversity, a conservation group, said: “We shouldn’t be killing our national symbol because we’re too lazy or too concerned with past types of ammunition to switch.” The National Rifle Association (NRA) has previously sued over attempts to phase out lead ammunition for hunting.

Biologists hesitate to estimate how many animals die from lead each year, but studies suggest the numbers are significant. A 2014 study found that of nearly 3,000 eagles killed over 30 years, about 25% died from poison, most often lead. In 2008, the Centers for Disease Control and Prevention found that people who eat game meat tend to have higher levels of lead in their blood.

“The science is overwhelming,” said Dr Myra Finkelstein, a toxicologist who studies lead poisoning in condors. “The answer is so clear that I wish we could just make the switch and protect human and wildlife health.”

Every year, one in five condors suffers lead poisoning so severe they need treatment, she said, and although the birds are the largest flyers in North America, a fingernail’s worth of lead can kill one. Lead poisoning appears to have stalled the species’ recovery in the wild.

“This has nothing to do with people’s right to hunt,” she said. “We took lead out of gas and out of house paint. That doesn’t mean you don’t drive a car or paint your house. It’s about using something that’s safe for you and your family as well as an animal that comes upon it.”

The solution, according to scientists and a growing coalition of hunters, is non-lead ammunition. “I’m a hunter, too, so I’m kind of stuck in the middle,” said Chris Parish, who called himself a “redneck biologist” with the Peregrine Fund, a nonprofit tracking raptors in Arizona and Utah. Parish and Leland Brown, a biologist with the Oregon Zoo and himself a hunter, argued that hunters and scientists are natural allies to study, manage and preserve wildlife together.

“It’s not just good for the sport but ties directly into the tradition of taking care of the landscape, of being good stewards for wildlife,” Brown said.

Parish pointed to a small, voluntary program in Arizona and Utah that has managed to convince 87% of its hunters to either use non-lead bullets or haul out contaminated guts. “Do x-rays on carcasses and show hunters the gut piles,” he said. “This is real conservation that makes sense.”

But Parish said that politics have paralyzed many state agencies, hunters and scientists. The three groups should band together, he said, separate from government or political activists, and support programs that promote copper and steel ammunition.

“Read all the politics you want, but here’s the real dope. Here’s what we need you do to, and here’s a box of bullets to give it try,” he said. “The condor could stand as a symbol of what we’re capable of, not just another endangered species program nagging you.”

This article was first published by The Guardian on 16 Mar 2017.

We invite you to share your opinion whether Trump should ban the use of lead ammunition in hunting? Please vote and leave your comments at the bottom of this page.