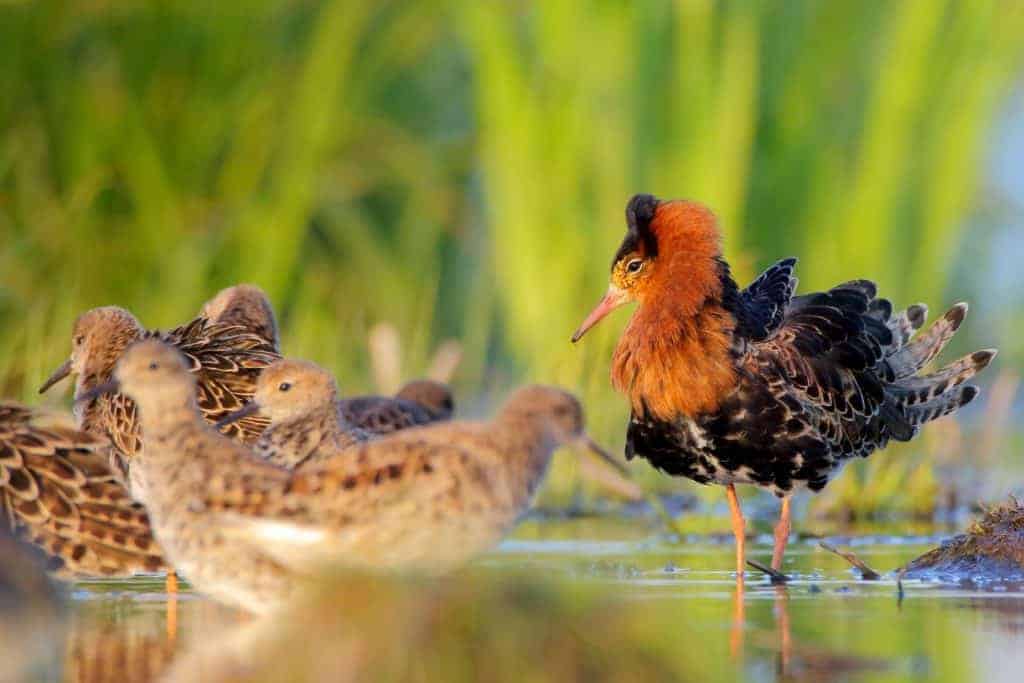 Despite the cold weather, bird migration is in full swing. Millions of birds have started moving from their wintering grounds in Africa, stopping over in the cold tundra of Eurasia.

At this time of the year, Turau Meadow in Belarus becomes a paradise for nature lovers – as many as 150,000 Eurasian Wigeon Mareca Penelope and 20,000 Black-tailed Godwit Limosa limosa can gather in these plains, sometimes in a single day.

But this year, it’s theRuff Calidris pugnax that gave birdwatchers the most joy, when thousands of these long-necked birds blanketed the skies.

While this site is currently the largest stopover site for the species during their spring migration across Europe, this year the numbers were a surprise to everyone.

A group of ornithologists, including researchers from APB (BirdLife Belarus)and Turov Ringing Station (NAS of Belarus), registered a record number of 120,000 Ruffs in a single day, which hadn’t been reported since the observations began in Turau Meadow back in 1997.

Turau Meadow is an open floodplain in the middle of Pripyat River and one of Europe’s most essential nesting and stopover areas for more than 50 migratory wading bird species such as Black-tailed Godwit, Great Snipe Gallinago media and Eurasian Oystercatcher Haematopus ostralegus – the three of them classified as Near Threatened by BirdLife for the IUCN Red List.

And these species don’t only stop there – this is where they nest.

For this reason, the floodplains were categorized as an Important Bird and Biodiversity Area by BirdLife and, since 2008, it has been recognized as a locally significant wildlife sanctuary by the Belarussian authorities.

This recognition has helped Ruff populations, whose range and populations have shrunk significantly in Belarus in the last 30-40 years. While listed as Least Concern by BirdLife, global populations are thought to have been decreasing as a result of habitat loss, intensive agriculture and climate change.

It comes as no surprise then that they have been added to Belarus’ Regional Red List, which means the species is excluded from the list of huntable species and their nesting area needs to be protected by the government.

Banding data shows that these birds nest across a territory that spans Scandinavia to Yakutia. Migration is often a difficult time for all birds, and stopover sites such as Turau Meadow, where they can relax and gather energy, are critical so they can reach their final destination.

Aerial view of the meadow at the beginning of April, preceding the mass arrival of the Ruff.

Unfortunately, stopovers like this meadow are now few and far between in Europe. Birds are reportedly staying in the floodplain for up to a month, taking the opportunity to feed on the invertebrates and grain available on the surrounding fields – almost doubling their weight in the process. This energy is vital for them to continue their journey to the next site.

Seeing how many birds depend on this habitat along the Pripyat River remind us of how important it is to conserve these vital ecosystems so we can save these birds from disappearing.

“The Pripyat River floodplain is such a vital place. It’s important to protect it and leave it unchanged,” says Pavel Pinchuk, Head of the Belarusian Center for Bird Ringing.

Since 2007, APB rents the area of Turau Meadow and has created a management plan for the local authorities. Both parties agreed on how to best safeguard this unique landscape and every year APB organizes volunteer camps to clean the area of overgrowing bushes while also managing the closing of the hunting season within the floodplains. They also participate in the surveying of the area and record bird population trends.

In March 2014, ornithologists recorded the largest number of birds in Turau Meadow ever. As many as 200,000 birds were counted within one square kilometer of the sanctuary. A similar number of migrating birds had not been recorded anywhere in Belarus up to that point.

With continued protection, we expect the area will continue to surprise everyone with record-breaking numbers of birds for many years to come.

This article was first published by BirdLife International on 08 May 2017.

At the moment on the territory of Belarus there are 23 wind turbines.