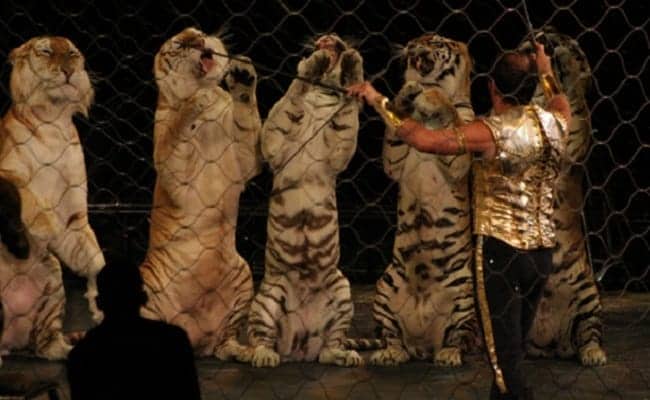 Plenty of animal lovers couldn’t have been more pleased when, after 146 years, Ringling Bros. and Barnum & Bailey Circus held its final performance on May 21. But just because the “Greatest Show on Earth” has ended doesn’t mean that the company’s performing animals will enjoy the greatest retirement.

Nope, just four days after that last performance, Feld Entertainment, the parent company of the circus, requested an Endangered Species Act permit from the U.S. Fish and Wildlife Service.

It wants to export 15 big cats — including eight tigers, six lions and a leopard — to Circus Krone. Based in Munich, the circus is one of the largest in Europe.

Unlike the circus’ performing elephants, which were owned by Ringling Bros. and sent to its Center for Elephant Conservation in Florida, the big cats are owned by their trainer, Alexander Lacey.

“They are now going home with their owner, simple as that,” Feld Entertainment spokesman Stephen Payne told CBS News. “His family has raised them for generations. He loves them. They’re like members of his family, so of course they’re staying with him.”

Will Feld Entertainment get the USFWS permit?

According to the Animal Legal Defense Fund, which originally broke the news, applicants are required to demonstrate that their requested activity will“enhance[s] the propagation or survival of the species.”

Well, since jumping through hoops and performing other unnatural tricks for an audience obviously does neither, it’s a sure thing the USFWS will reject Feld Entertainment’s application, right? Not necessarily.

The agency “has historically taken a controversial ‘pay-to-play’ approach to the enhancement requirement,” the ALDF reports. Endangered Species Act permits are frequently approved for objectionable uses — as long as the applicants make nominal donations to a conservation program.

But the USFWS should be aware of an investigative report on circus tigers released last month by the Humane Society of the United States. In one traveling circus, the tigers were confined to 13-square-foot cages in which they had to eat, sleep and relieve themselves.

And life doesn’t get much better for the big cats outside of their cages. After becoming frustrated during a training session, one trainer whipped a tiger 31 times in less than two minutes.

The USFWS should find such treatment of tigers by any circus unacceptable. Feld Entertainment did the right thing by ending the Ringling Bros. Circus. Now the company must again act ethically by letting the performing animals they exploited for profit retire to a sanctuary.

“After spending years being carted around in cramped transport cages for 50 weeks of the year, it’s time for Ringling and trainer Alexander Lacey to let these tigers live out their lives at a reputable sanctuary where they can experience the space, habitats and peace they need and deserve,” the ALDF stated.

Until June 25, you can submit a comment regarding the circus’ permit application on the USFWS website. Before you do so, the ALDF has some helpful guidelines to follow.

You can also sign and share this petition urging Ringling Bros. to let its animals live the remainder of their lives out of the spotlight.

NO! let them go to a sanctuary

How kind we are! So the cats go from a USA Circus to a German one….guess they might get more sausages there.

We are supposed to be helping the tigers not sending them from bad to worse ! Stop wild animals in circus’s EVERYWHERE they are not slaves and they are not objects to own !

what is there entertaining about it? and so cruel, i thought the german people are smarter than that

its all about the money isn’t it Alexander Lacey! They have provided you with all they have and you have profitted and you cannot grant them sanctuary after all these years? Shame on you!

how incredibly cruel, stupid and “unevolved” we as a species are.

and yet, many of us actually cling to the myth of our superiority…

Abuse of these magnificent and endangered top predators should be ended and they should be allowed to live out their lives in a proper wildlife park or sanctuary.

This kind of animal abuse should be outlawed internationally. Future generations will look back on it as equivalent to the slave trade of the 19th century. What civilised person wants to watch such a creature being humiliated and degraded in the 21st century?