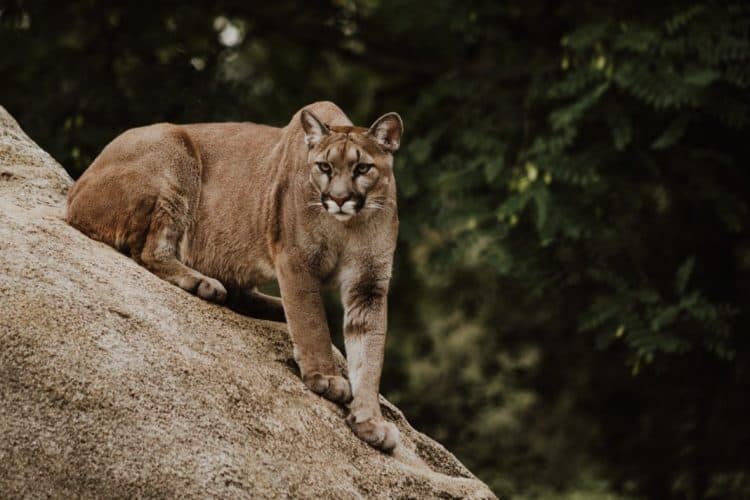 One of two mountain lions found dead recently in the Santa Monica Mountains was killed by potent chemicals used to poison rodents, according to National Park Service researchers who have been studying the region’s famed big cats for nearly 20 years.

The mountain lion, known as P-30, is the fifth in a long-term study of the species whose death was connected to the rodent poison. An otherwise healthy 6-year-old male cat, P-30’s official cause of death was anticoagulant rodenticide poisoning, NPS biologists said Tuesday.

The cause of death for a second mountain lion found dead in August in the Malibu area has not been determined, but similar poisons were found in her system, the NPS said.

The body of P-30 was found by researchers after his radio collar sent a mortality signal from the Topanga State Park area. The carcass showed no obvious signs of injury, according to the NPS.

A necropsy determined he suffered internal bleeding, and hemorrhaging of the brain and abdominal cavity, which contains crucial organs. Testing showed P-30 had five different rodenticides in his system, including a high concentration of the potent anticoagulant bromadiolone.

The big cat’s death is another example of the wide-ranging impacts that rodenticides, intended to control pests can have on wildlife. Since 2002, when a study began to examine how the animals survive in an urban area, NPS researchers have found the poison’s compounds in 23 out of 24 SoCal mountain lions tested.

The poisoned mountain lions include a 3-month-old kitten.

“Just about every mountain lion we’ve tested throughout our study has had exposure to these poisons, generally multiple compounds and often at high levels,” said Seth Riley, an ecologist and the wildlife branch chief for Santa Monica Mountains National Recreation Area (SMMNRA). “A wide range of predators can be exposed to these toxicants — everything from hawks and owls to bobcats, coyotes, foxes, and mountain lions.

“Even if they don’t die directly from the anticoagulant effects, our research has shown that bobcats, for example, are suffering significant immune system impacts.”

Researchers said mountain lions are likely exposed through secondary poisoning, such as eating another animal that ingested the poison used for bait.

Vehicles strikes remain the most common human mortality cause of death for Southern California’s mountain lions, followed by anticoagulant poisoning. Rat poison also is suspected in the death of mountain lion P47, found dead in the Santa Monica Mountains in March. In September, a man was arrested on suspicion of fatally shooting a mountain lion who was part of a study.

P-30 was considered a significant part of the NPS mountain lion study. Re-captured and fitted with a new GPs collar in February 2018, he was the first male kitten to be marked at his den, then survive to adulthood and establish a home range — an area typically traveled in search of food and a mate.

P-53 was a 4-year-old female mountain lion who was found dead Aug. 15 in Malibu. Her carcass was too decomposed to determine a cause of death, but substances similar to those found in P-30 were found in her liver, the NPS said.

The mountain lion population is high in California, relative to other parts of the United States. Density estimates vary, but the figure might be as high as 10 lions per 100 square miles. By that estimate, the population is somewhere between 4,000 to 6,000 mountain lions statewide.

But it’s difficult to say whether that population is increasing or decreasing without an ongoing statewide study.

One thing is certain — mountain lions go where they can find food, primarily deer. That sometimes brings them into urban areas, but it should be noted that a person is 1,000 times more likely to be struck by lightning than attacked by a mountain lion, according to the California Department of Fish and Wildlife. There have been only 16 verified mountain lion attacks in California since 1890, six of which were fatal, according to the agency.

The department receives hundreds of reports each year about mountain lions killing pets and livestock.

Mountain lions are a specially protected species in California under the California Wildlife Protection Act of 1990, approved as Prop 117 by California voters. The classification has nothing to do with mountain lion numbers in California, but its passage made it illegal to hunt the big cats.

This article was first published by NBC Los Angeles on 8 October 2019.