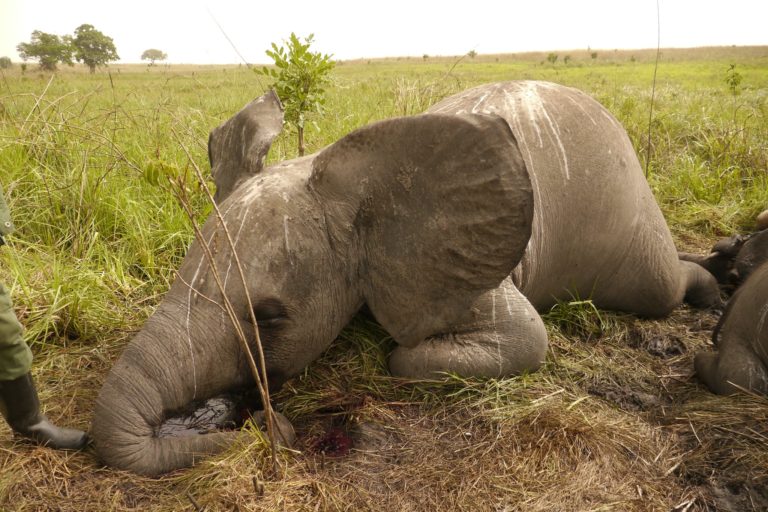 Two of the Democratic Republic of Congo’s most prolific wildlife traders have been handed jail terms this year, in a rare spell of conservation wins for Congolese law enforcement.

Salomon Mpay 51, was arrested at a Kinshasa hotel on Jan. 30, following a two-year joint investigation between the Congolese Institute for the Conservation of Nature (ICCN) and Conserv Congo, a Kinshasa-based not-for-profit. Mpay, who goes by the pseudonym of “The King,” was caught with 35 kilograms (77 pounds) of cut-up ivory, which he intended to sell to an undercover agent posing as a client.

He was also in possession of almost 2.5 metric tons of pangolin scales. However, delays in issuing a search warrant following his arrest meant accomplices had time to move the contraband before the authorities could return to seize the goods. Photos on his cellphone indicated a further ivory stockpile of 3 metric tons kept at an undisclosed location; investigators are actively looking for the items. Similar quantities of pangolin scales and ivory have sold for as much as $8 million and $6 million, respectively.

On April 22, Gombe Magistrates Court in Kinshasa, the capital, sentenced Mpay to two years in prison. While Mpay’s arrest has been hailed by conservationists as a rare victory in the fight against the illegal wildlife trade in DRC, lawyers acting on behalf of ICCN, the state-run wildlife authority, and Conserv Congo have lodged an appeal, through the public prosecutor’s office, describing the sentence as unduly lenient for a transnational wildlife trafficker whose career spans three decades.

“He is one of the few local traders that I know of who has got a passport full of stamps — mainly in Africa,” Conserv Congo founder Adams Cassinga told Mongabay.

Mpay is linked to a number of traffickers across the continent, including in Zambia, Uganda, Burundi, South Sudan, Central African Republic, Angola, Republic of Congo, Nigeria, and Sierra Leone. Documents in his possession at the time of his arrest attested to his dealings with people in Southeast Asia, where he is known to have sent multiple consignments of wildlife contraband.

“He is a major link. A network is a chain of people, you can cut the link — his conviction won’t affect the trade, per se, but it will affect the organization,” Cassinga added.

The International Fund for Animal Welfare (IFAW) is providing financial and legal assistance to support the appeal.

“Ensuring the integrity of prosecutions and that appropriate sentences are imposed and maintained is a critical but often overlooked aspect of how the conservation community is addressing wildlife crime,” Matt Morley, IFAW program director for wildlife crime, said in a statement. “This case represents a positive example of how supporting both law enforcement and prosecutions can yield positive results. That the initial sentence imposed on a figure as prominent as Mpay was relatively light is of concern.”

Morley added, “The rewards for wildlife crime greatly outweigh the risks involved, and even with notable successes like this, we will not make sufficient progress until this situation is reversed.”

A month earlier, a notorious elephant hunter received a much stiffer sentence. Rombo Ngandu Lunda was found guilty of the systematic slaughter of elephants at Upemba National Park, one of the oldest protected areas in Africa. Rombo was sentenced to 20 years in jail and ordered to pay a fine of $25,000 in reparations to the ICCN. An accomplice, Kamandji Ekonda Gustave, was sentenced to 10 years.

The ruling by the Garrison Military Court of Kamina, the provincial capital of Haut-Lomami in southeastern Congo, is believed to be one of the highest penalties for wildlife trafficking anywhere in the world and the strictest in DRC history.

“This judgment paves the way to put an end to acts of poaching and attacks on protected species, but also to dissuade and more severely punish offenders,” the ICCN said via a written statement.

Rombo’s eight-year campaign targeted Upemba National Park, the last refuge for elephants in southern DRC. There are only around 200 left in the park. His activities also affected villagers in the Upemba catchment area, with increased incidents of human-elephant conflict after distressed elephants strayed from their usual routes. Several human deaths and injuries were reported, as well as extensive destruction of property and crops, according to the ICCN.

“We have more rhino horn than any other country. But Congo doesn’t have any more rhinos — they’re all long dead. That makes us not only a source country, but a major transiting destination at this point. We have got the largest number of borders in Africa — they are very long, they are mostly uncontrolled and therefore very porous — coming in and out is very easy,” Cassinga told Mongabay.

In 2019, authorities in Singapore seized a record haul of 11.9 metric tons of pangolin scales and 8.8 metric tons of elephant ivory. The shipment of three containers came from the Democratic Republic of the Congo and was en route to Vietnam, an international wildlife trafficking hotspot.