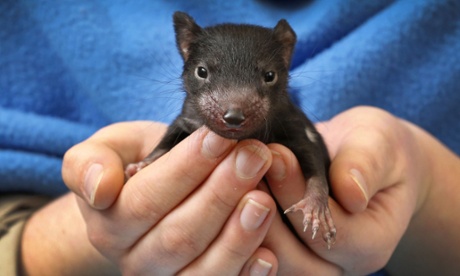 Zoos Victoria is to create a “halfway house” for endangered species in a new conservation strategy in which there will be a controlled release of Tasmanian devils on mainland Australia. A former Aboriginal reserve called Coranderrk will be used to release four of the devils, as well as 40 each of the Leadbeater’s possum and helmeted honeyeater. All of the species are endangered, with just 60 helmeted honeyeaters remaining.

The 140-hectare site, which adjoins the Healesville Sanctuary, will be used to test the “survival fitness” of captive species, ahead of potential release to new sites.

While the Tasmanian devils won’t be free to roam beyond the area, it is a significant reintroduction to Victoria for a species that is thought to have become extinct everywhere in Australia, other than Tasmania, about 400 years ago.

“Up until now, conservation has been about a numbers game, popping out animals from breeding programs that don’t end up doing very well in the wild,” he said.

“Captive institutions have two problems – there is often no outlet for the animals they breed and the other is the recovery model. If we are breeding an insurance population of Tasmanian devils (which have been ravaged by facial tumour disease in Tasmania) for 20 years and the government wants to suddenly flick the switch and release them, we have no idea how they will cope in the wild.

“The question we want to answer is ‘how do we improve the quality of the captive populations we have?’ because the qualities of a good animal in captivity are very different from those they need in the wild.”

Coranderrk is a rarity in Victoria – a publicly owned, relatively untouched piece of floodplain territory. The mass clearing of land for agriculture has decimated much of the habitat suitable for, in particular, lowland Leadbeater’s possums and helmeted honeyeaters, both of which are Victorian faunal emblems.

In a three-month trial, four captive Tasmanian devils will gradually be released into Coranderrk, to see if they can cope with being in the wild.

“People think Tassie devils are scavengers, but they are predators in their own right – they can take down a small wallaby, which we have plenty of in the Coranderrk,” said Harley.

“The juveniles are also very good at tree climbing. They are a more sophisticated animal than you’d think.”

The devils will still be provided food, but also monitored to see if they can make dens and feed together boisterously over carcasses.

Meanwhile, some of the helmeted honeyeaters will be exposed to the goshawk, their main predator, while others won’t, to test the survival capabilities of the species. Leadbeater’s possums will follow once enough suitable trees have grown on the site.

“We need to give these species a test run in a wild situation to see how they do,” said Harley. “We should be placing the emphasis on individual quality, rather than just quantity. If we step back and expand our thinking, we’ll realise captivity doesn’t have to involve just small cages.”

Beyond the halfway house of Coranderrk, Zoos Victoria has set a target of five release sites with 100 individual possums and honeyeaters in each. The devils could be sent to Maria Island, which is cultivating a disease-free population of the species.

The Arthur Rylah Institute for Environmental Research is modeling terrain for the ideal release habitat, factoring in not just current conditions but also future scenarios with climate change.

One site, Yellingbo, has almost all of the world’s helmeted honeyeaters, placing the future of the species at severe risk from a one-off event such as bushfire.

“We have specific targets for the wild and we need Parks Victoria and the government to share the vision as we can’t succeed without our other partners,” said Harley.

“The reality is that politics ultimately decides whether these things actually work, which we need to deal with directly.”

A spokesman for Ryan Smith, Victoria’s environment minister, said that the government had commissioned a report into the state of the Yellingbo reserve and set up a panel of experts to assess the prospects for the Leadbeater’s possum.

“We believe we can turn around the decline of the possum and the honeyeater, which are important to us all as state emblems,” he said. “We are optimistic and we will take decisive steps to act.”