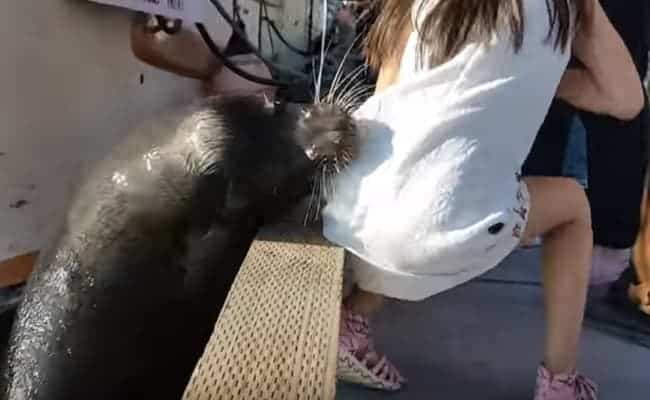 You’ve probably seen that viral video of a young girl being grabbed by a sea lion and pulled into the water at Steveston Fisherman’s Wharf near Vancouver, Canada.

The grandfather of the six-year-old can be seen jumping in after her and saving her. The girl was taken to a hospital and treated for a superficial wound. She was put on antibiotics because the bacteria in sea lions’ mouths can cause very serious infections that can result in the amputation of limbs or even death.

When the video first made the news May 20, there was concern about the sea lion’s behavior and if it was typical for these sea mammals to be so aggressive.

But animal experts like Andrew Tites, director of the University of British Columbia’s Marine Mammal Research Unit, had different concerns.

“My first reaction to the video is just how stupid some people can be to not treat wildlife with proper respect,” he told CBC News. Later he added, “They are not circus performers. They’re not trained to be next to people.”

It’s not like the sea lion suddenly appeared out of nowhere and attacked the girl. As you can see in the extended video, bread crumbs were being tossed to the sea lion a few seconds before he grabbed the girl from her precarious perch on a low railing.

“The little girl has her back to the sea lion and it would appear that the sea lion sees part of her dress, thinks it’s food, reaches up, grabs at the food and pulls her in by the dress,” Tites said. “But it wasn’t food of course.”

He said the sea lion was probably just as surprised as the little girl.

The girl’s family has been criticized on social media for feeding the sea lion, but the girl’s father, identified by CBC News as Mr. Lau, said it was people standing near them who were throwing the bread crumbs.

“My daughter went to the front to try to see the sea lions, to get a closer look,” he said.

Lau did admit his daughter was in much too close proximity to the sea lion. “That’s a lesson she took and she has taken that lesson in a hard way,” he said. (Lau needs to take that lesson as well.)

There are several signs posted around the pier warning visitors not to feed the sea mammals. It’s also against the law. According to Canada’s Marine Mammal Regulations, “No person shall disturb a marine mammal except when fishing.” New signs have been posted at Steveston Fisherman’s Wharf warning that violators can be fined up to $100,000.

“You wouldn’t go up to a grizzly bear in the bush and hand him a ham sandwich, so you shouldn’t be handing a thousand-pound wild mammal in the water slices of bread,” Robert Kiesman, chair of the Steveston Harbour Authority, told CBC News.

It’s also wise to stay a safe distance away from sea lions and to make sure your kids do the same.

“You certainly shouldn’t be letting your little girl sit on the edge of the dock with her dress hanging down after the sea lion has already snapped at her once,” Kiesman said. “Just totally reckless behavior.”

Hopefully this video, which has been viewed over 23 million times, will serve as a scary example of why people should just leave wild animals alone – although, after it went viral, Steveston Fisherman’s Wharf was packed with people looking for the sea lion, including parents holding their children up over the water.

“You can only spend so much time protecting people from their reckless behavior,” Kiesman told CBC News. “We’ve now seen an example of why it’s illegal to do this and why it’s dangerous and frankly stupid to do this.”