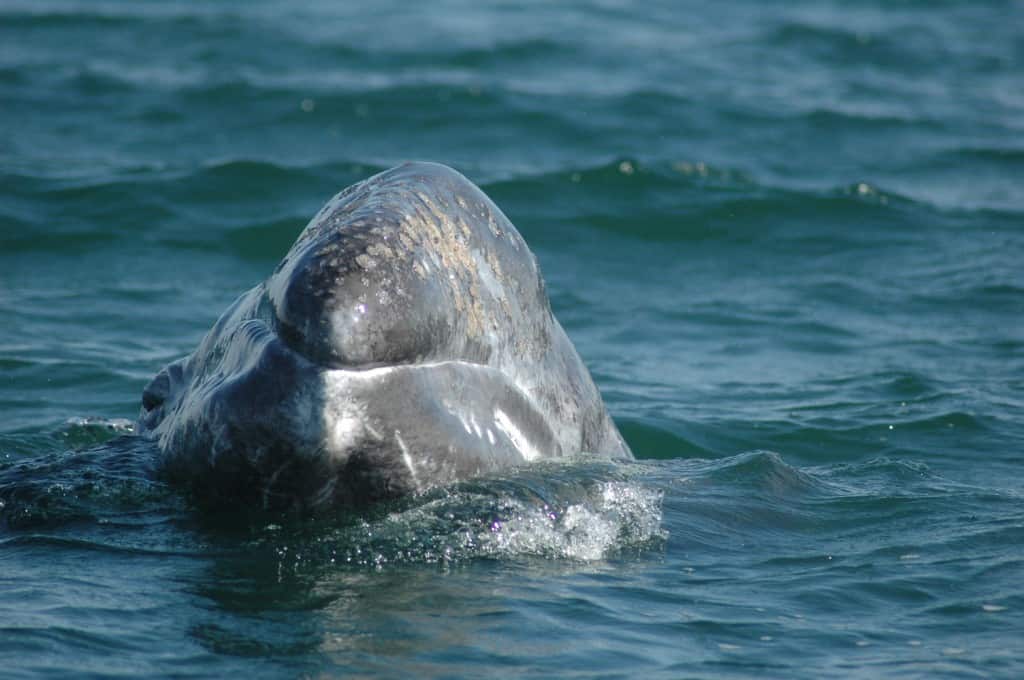 Less than 40 years ago the Pacific gray whale was considered to be on the verge of extinction…and so it was. After years of commercial hunting numbers had been reduced to a level where it was feared that the population was so low that they could not recover. However, within the last five years this whale species has been removed from the list of marine mammals critically endangered with extinction as their numbers have increased to around 18,000 animals. All else being equal, which in the animal world it frequently is not, future humans generations will likely be able to view these magnificent beasts in the wild as they cruise the warm, shallow Pacific lagoons of Baja Peninsular inMexico.

The gray whale (Eschrichtius robustus) once existed as three distinct populations. One in the Northwest Atlantic which was hunted to extinction as early as 1700. Another in the Pacific Northwest around Korea which was hunted up until the late 1960’s. This population currently numbers no more than a few hundred animals at most. The population we see most of today is the Northeast Pacific gray whale found off the northwest coast of North America. Also known as the California gray whale this species makes what is widely believed to be one of the longest migrations in the animals world, between 12-13,000 miles round trip.

The one species in the cetacean family Eschrichtiidae, they are the only baleen whales that bottom feed. Lying on their side, usually in fairly shallow water, they scoop up large volumes of water and sediment, forcing the water out through short baleen plates which trap small organisms like amphipods, mysids, tube worms and even herring eggs and other small fish species. Feeding during the northern hemisphere summer months throughout the Behring and Chukchi seas they are forced to start their migration as the sea ice moves south in the autumn. Many of the immature non breeding animals don’t make the whole journey. Some stop at key points along the route and may feed opportunistically. The adult breeding males and females and expectant mothers bearing young continue to the warm water lagoons on the Pacific coast of Baja California Sur in Mexico. Young are born here protected from serious predation and during the few months they spend in Baja the mothers nurse their young without feeding, surviving only on fat reserves. Mating takes place in these lagoons and may involve two or more males competing for a receptive female. They can become boisterous affairs!

The Northwestern Pacific gray whale population, so critically endangered, has recently been in the news. This sub species has always been considered genetically distinct with migratory patterns restricted to the Okhotsk Sea and around Sakhalin Island suggesting the two sub species remained separate. However, a female from the western population, named Varvara and bearing a satellite tag has changed the way we consider the interactions of these animals. This past 2011/12 season she has been tracked down as far as Mexico and the lagoons of Baja and it is thought that she may have been breeding with males from the Eastern Pacific population. As of April 22nd 2012 Varvara, having travelled up the Pacific coast of America, was recorded heading west towards her previous known range along the edge of the Arctic ice between Alaska and Russia.

Apart from the critically low numbers of the Western sub species and the oil drilling operations off Sakhalin Island which will undoubtedly continue to threaten the breeding potential of this group; threats to both gray whale sub species continue to cause concern for the future of the group as a whole. Ship strike and entanglement in inshore static fishing gear continue to impact mortality but in the longer term climate change is considered to be the greater threat. As Arctic ice decreases in volume each summer the algae which grow on the underside of ice floes declines. This algae is the main food source of the amphipods which make up a large part of the diet of feeding gray whales in northern waters. A decline in these shrimp like creatures would have a serious impact on a species whose specialised feeding habits are so closely linked to a regular supply of very large quantities of these small crustaceans.

Meanwhile, the Pacific gray whale has huge following. Whale enthusiasts from all over the world converge on the Western seaboard of the USA each autumn to witness the migrating whales which come in close to shore on their way south to Mexico; and again on their way north in the spring. A few hardy souls venture south in the winter to the remote lagoons of Baja to view mothers and calves both from the land and from small boats; marvelling as these 35 tonne gentle giants, once so persecuted by man, approach within touching distance!