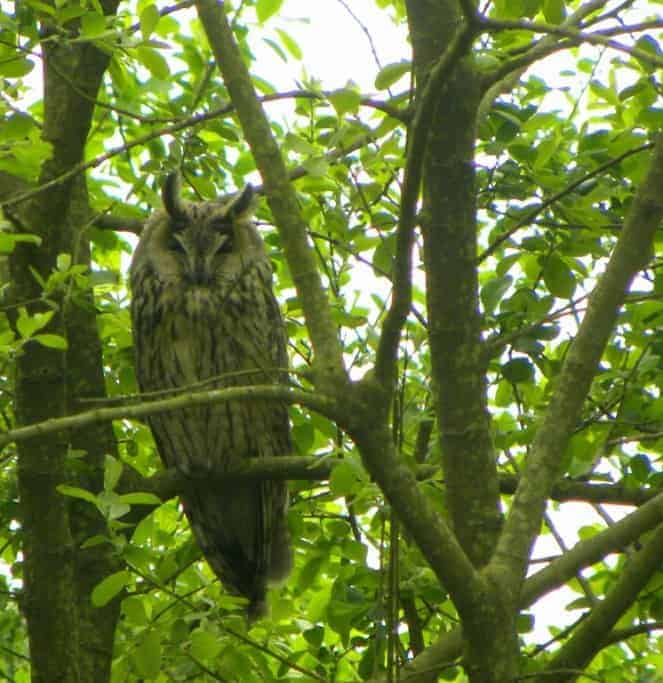 On a special evening early last spring a friend and I were heading down the valley after an unsuccessful search for Eagle Owls. We arrived down by the house and suddenly heard the light calling of ‘boo boo’ which was the distinctive call of a Male Long-Eared Owl! We sat andlistenedfor a spell and also got the female calling and by the time my dad joined us we had 4 Long-Eared Owls wing clapping and calling less than 100 yards from my house!

There is a long stretch of shelter belt mainly consisting of Scots Pine and with no managed shooting our population of Magpies and Carrion Crow nest sites have built up. Corvid nests are the favorite sites for Long-Eared Owls. The potential turned to confirmation as a pair of LEOs used an old Magpies nest in a Scots Pine. Even old Corvid nests can be shot out from below on shooting estates if suspicion of second use by Corvids even though they can be used by a widevariationof species like Tawny Owl and Hobby.

There was a worrying time during the Owls incubation period as the famous Helm wind ( the only named wind in Britain, which speeds up and down the northern pennine valley during the spring) arrived later than normal. After nine days of strong gales with trees down along the shelter belt blocking off access to the local village, the eggs hatched on the last day of the Helm wind. Thanks to the sturdy construction of the old Magpie nest the LEOs breeding attempts survived the savage spell and the male could be seen bringing in prey to the nest site.

The male was very confident in his camouflage and most days would sit low down in a Willow with light foliage. No open reports were made because of the obvious reasons of the pairs breeding attempts but somehow over 500 people heard about the birds and came up to view these beautiful animals. It was very rewarding to see non-birders and young family’s coming up to see the Owls and hearing of peopletravellinghundreds of miles.

After more worrying spells of strong winds the 25th May was a significant date not just for the Owls but the first midges of the year! Not long afterwards the famous squeaky gate call of the LEO chicks confirming their presence in the nest. June 6th and the first chick had left the nest along with the second one shortly afterwards. It was amazing seeing the family of four all together.

The close by resident Barn Owls produced four chicks and along with LEO both species could be seen hunting together on the evenings. Short-Eared Owls were in double figures up on the fell and Tawny Owls breeding within 100 yards of LEO again in an old Corvids nest. Unfortunately the Eagle Owls did not make it to a third breading season as certain people were not happy of their presence and the birds disappeared during the winter period. Cameras on the Eagle Owl pair in Bowland show that the majority of Eagle Owls prey is Rabbits.

Overall there has been a lot of success with the Owl species in the area and a major reason for this is the new management in the valley which has removed sheep from 6000 acres of land and replaced them with cattle under a high level stewardship which will run for 10 years. The idea is to bring back trees naturally and also benefit other species like Black Grouse and also the hugely important Vole populations which are the reason for the good number of owls in the area. It shows what so many upland areas of Britain are missing.

I will remember 2011 for our famous pair of Long-Eared Owls and the joy and pleasure so many people got from seeing them, and long may it continue. As one person said about Geltsdale this summer ‘Its like Hogwarts up here!’