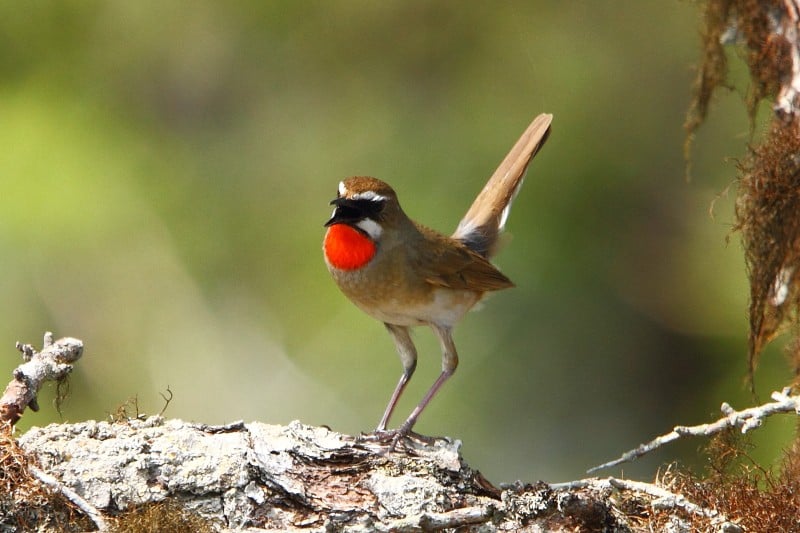 It has been said that our generation lives at the optimal time of the world’s history for birding and wildlife watching. Although vast parts of our natural heritage have been destroyed over the recent few centuries (sadly most rapidly during the last few decades), enough still exists that almost all species may still be encountered. In the past, while there was more habitat and wildlife, many parts of the world were inaccessible and information about finding species was not available. At present we have the means to travel almost everywhere on our planet AND most wildlife still survives. However, unless drastic changes are made it seems inevitable that at least one of these conditions will no longer exist.

Sunset over the rugged wilderness of the Russian Far East. Image by Felicity Riley

I recently had the pleasure of exploring Russia’s Far East. This is one of the remotest and least visited parts of our planet, and a new frontier for wildlife watchers. This region’s human population is minimal and vast areas of wilderness still exist, sadly a great rarity on our overpopulated planet! Although the area’s wildlife was severely impacted by the fur trade, whaling and other human activities during the late 18th century soon after it was “discovered” by westerners and several species became extinct (e.g. the giant Steller’s Sea Cow and Steller’s Cormorant) or nearly so (Sea Otter, Grey Whale), the populations of those that survived the initial onslaught have somewhat recovered. In the instance of Sea Otters, it is estimated that they are back up to their maximum carrying capacity in certain parts of the Russian Far East.

Our voyage aboard Heritage Expedition’s “Spirit of Enderby” departed from the only city in the region, Petropavlovsk-Kamchatskiy on the Kamchatka Peninsula. As we sailed out of Avacha Bay, one of the world’s largest natural harbours, we got a taste of what the next two weeks would bring – thousands of birds were on the move, including our first of many beautiful Red-faced Cormorants and no less than 8 species of alcids. Alcids are a Northern Hemisphere family of marine birds, and I am sure most people are familiar with one of their members, the comical puffins. For those who haven’t had more exposure to these unique birds, there are 23 surviving species (the most recently extinct was the largest and only flightless representative, the Great Auk) and they go by names such as Murres, Murrelets, Guillemots, Auklets, Razorbill and Dovekie. We saw no less than 12 species of these unusual and attractive birds during our time in the Russian Far East.

The first day’s cruising the calm waters of the Bering Sea had us entertained by vast numbers of seabirds, with highlights including Laysan Albatross and dainty Fork-tailed Storm Petrels. These were complemented by Sperm, Fin, Minke and Humpback Whales and playful Dall’s Porpoises. Nikol’skoye village on Bering Island was our first port of call. Bering Island is one of the two main islands that make up the Commander Islands, and this village is one of the world’s remotest human habitation. Nikol’skoye boasts a fascinating museum, an eccentric artist, brightly painted buildings and some great birding. Highlights of the last-mentioned include Mongolian (or Lesser Sand) Plovers in full breeding plumage; Dunlins in frantic display, as the males accosted females with their unusual single-lifted wing display; the localized Rock Sandpiper; singing Lapland Longspurs; Snow Buntings and furtive Pechora Pipits.

Zodiac rides and landings in the wilder areas of Bering Island (pretty much everywhere away from the village is wild here) and nearby Medney Island had us marveling at towering cliffs and isolated stacks that hosted thousands of seabirds in mixed colonies. Localized Red-legged Kittiwakes were common in amongst their even more abundant Black-legged cousins. Tufted and Horned Puffins nested side by side and spirals of Northern Fulmars filled the sky. Colonies of endangered Steller’s Sea Lions roared at us – a quite remarkable and fearsome sound – and we encountered haul-outs of Harbour and Largha Seals, as well as our first Sea Otters.

After steaming back to the Kamchatka Peninsula, we again boarded Zodiacs and explored along the Zhapanova River. Here the world’s biggest eagle, the mighty Steller’s Sea Eagle, had already started to gather in numbers to feast on the salmon run and to nest. We encountered at least 20 of these ferocious looking eagles sitting in the shallows and even in vast stick nests in trees along the river banks. Birding this area was incredibly rewarding, and further highlights included a lovely pair of Falcated Duck, Smew, Long-toed Stint, Aleutian Tern, Rustic Bunting and Common Rosefinch amongst many others. A Muskrat swimming alongside the bank provided another interesting sighting, as did the smoking Karimsy Volcano.

The rugged mountainous scenery as we sailed southwards along the Kamchatka Peninsula was nothing short of jawdropping! Landings and Zodiac rides in the Buhka Russkhaya area produced our first Brown Bear sightings, incredibly close experiences with a pod of a dozen Orca, the rare Long-billed Murrelet and a dazzling white raptor that after healthy debate and scrutiny of images turned out to be the little known pure white form of the albidus race of Northern Goshawk, not a Gyrfalcon as was many people’s initial expectation. Amazingly, we even had a Steller’s Sea Eagle land on our ship and observe us for an hour; not even the forest of bristling telephoto lenses or thousands of shutter clicks deterred this giant raptor!

South of the Kamchatka Peninsula lies the long line of the Kuril Island chain that separate the frigid Sea of Okhotsk from the warmer Pacific Ocean. Here upwellings of deep and nutrient-rich waters provide the sustenance for countless seabirds and marine mammals. The next week of our cruise had us zigzagging between these towering volcanic islands where regular landings or Zodiac rides allowed us to explore the wildlife of this almost uninhabited area. At Ptich’i Island we marveled at thousands of nesting seabirds and a mindboggling gathering of 500+ Sea Otters! At Brotana Bay tucked away inside the caldera that forms Simushir Island, we explored a secret Soviet submarine base that was seemingly abandoned with almost no warning in 1994. Troops stationed here left clothes, books and other personal items in their quarters, glasses and plates still on tables in the dining rooms and medical equipment in the hospital, an eerie experience indeed.

An evening excursion into another caldera, that of Yankicha Island, was an experience of a lifetime as literally hundreds of thousands of Crested and Whiskered Auklets filled the sky as they came to roost. The local Arctic Foxes had certainly picked a good home and were busy hunting these innumerable birds as well as flocks of painted Harlequin Ducks. Nearby we were thrilled to find an endangered Short-tailed Albatross. A single bay on Iturup island produced no less than 9 Brown Bears! 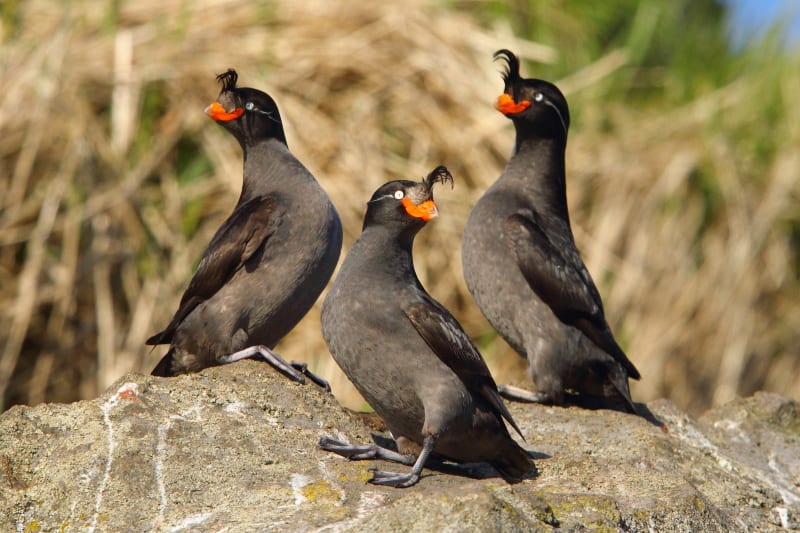 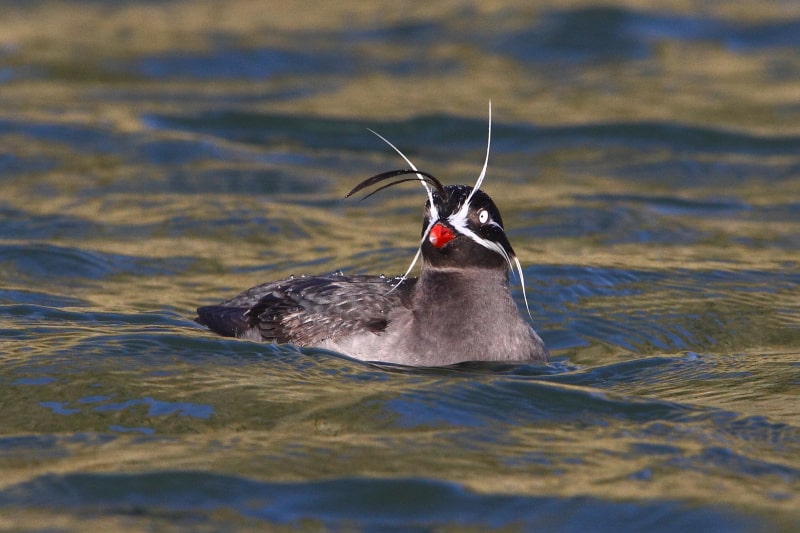 A trip into the interior of Kunashir Island yielded temperate forests stretching off into the horizon and a relaxing swim in a thermal river for those who chose to indulge. As we moved southwards, Spring really seemed to erupt and the contrast between the bleak, snow covered mountains of the Commander Islands to the green forests, bursting with bloom and birdsong of the southern Kuril Islands was wonderful to observe. Passerines were far more prominent here, commonest of all was the ebullient and beautiful Siberian Rubythroat, but other highlights included the stunning Japanese Robin, Japanese Accentor, Pine Grosbeak, Red-flanked Bluetail, Brown-headed Thrush, Kamchatka Leaf, Japanese Bush, Lanceolated and Middendorff’s Grasshopper Warblers, Spotted Nutcracker, Siberian Nuthatch, Long-tailed Rosefinch and a surprise find of a pair of Asian Rosy-finches. Other avian delights were singing Eurasian and Oriental Cuckoos, the diminutive Japanese Pygmy Woodpecker and Eurasian Wryneck. As our adventure drew to a close, we headed westwards through the Sea of Okhotsk, past floating flocks of thousands upon thousands of moulting Short-tailed Shearwaters, until we arrived at Kalsakov Port on Sakhalin Island where our Russian Far East adventure came to an end.

I feel truly honoured that I have had the privilege of being able to explore this little known and almost untouched wilderness, a trip I cannot more highly recommend. If you are interested in details of similar upcoming Russian Far East cruises or even exploration of wader breeding grounds (including the highly sought-after and critically endangered Spoon-billed Sandpiper) to the north of the area described above, please contact the Rockjumper Birding Tours office for more details: [email protected] or www.rockjumperbirding.com

Amazing photographs and scenery! We thoroughly enjoyed…Paul and Sue

Definitely want to do this tour in the future….only so much that Hokkaido can offer, and this takes it one step further.

Thanks for pointing out that error Karl, I have corrected it!
Adam

There is a picture of a whiskered auklet, named as a crested auklet…

Great shots Adam and Felicity…brings back fun memories. That fox out the window is a funny one but the crested auklet is super.

Lots of great memories here….  what a trip !

Absolutely beautiful and what an incredible journey!.  Truly inspiring, Adam.

Thanks for the great comments Peter, Zelda and Tom!

Hi Adam, thank you for sharing your adventure into such an incredible area of the world. Your photos are stunning and they took me right along with you. You remain my hero and life role model. My best to you and Felicity!

What an incredible experience Adam – and thank you for sharing your adventure with us in such a graphic and detailed way.   Much appreciated.

Awesome images Adam….I am saving the read till tomorrow when I am fresh……

Thanks Ken – it really was an incredible experience. Although there is pressure on this region (for instance there is a lobby to allow Sea Otter hunting again), the fact that this area is extremely rugged with frigid winter temperatures does mean that it will be more difficult to destroy.