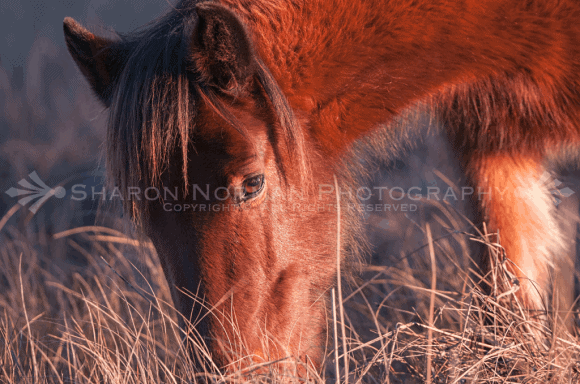 I had the privilege of visiting Chincoteague Island and Assateague Island, in Virginia, during mid-February ’13. Chincoteague is a quaint, friendly town and Assateague Island was abundant with wildlife. I had my sights set on finding the famous Chincoteague Ponies, known worldwide for the pony swim and penning that occurs yearly on the last Wednesday of July. The ponies are actually feral, most likely left by settlers who moved to the island a few hundred years ago to avoid being taxed on farm animals.

When the settlers left, the ponies were able to survive on their own, and still do, without human intervention. Today, they are still viewed and treated as wild animals but they do receive contraception to avoid overpopulation on the island which would be devastating as their food supply is often scarce. They are also inspected by a veterinarian twice a year as they are sold at auction every July and will be integrated into domesticated herds.

The ponies are smaller in size compared to domesticated horses partly due to their poor diet of salt marsh plants and brush. Due to their high consumption of salty plants, their water intake is considerably high giving them a bloated appearance. The ponies separate into small herds usually consisting of a stallion, several mares and their foals.

The Chincoteague Ponies are now managed by the Volunteer Fire Department of Chincoteague, with the total population of ponies on the island kept to around 150. During the Pony Swim, also known as the Pony Penning, the largest foals are sold at the auction that occurs on the last Thursday of July, with the remainder of the ponies and small foals returned to Assateague Island the next day.

I hope you enjoy my photographs of the Chincoteague Ponies as much as I enjoyed capturing their beauty and unique expressions!

Fine Art Prints or Canvases of the Chincoteague Ponies

Sharon has always been artistically expressive from a young age - drawing, painting, piano, violin - growing up with a crayon, pencil, paint brush, or musical instrument at her fingertips. After her childhood and teen years, graphic design and web development filled her need for creativity. Sharon's true passion is now photography. What started out as a hobby on Instagram in late 2011, has evolved into a journey of self-expression using a digital medium. Sharon is self-taught in photography, through trial and error and countless hours of practice and experimenting. She thoroughly enjoys being outdoors to witness and capture the beautiful sights that are everywhere around us. Her photographs have been published locally and are now on display/for sale at local businesses. Sharon was bitten by the travel bug in 2006, and is either traveling or planning her next destination. She enjoys seeing new places and experiencing other cultures. Sharon owes her love of traveling to her parents, who took her on many vacations across the U.S., having been to every state except Hawaii. In recent years she's traveled to Alaska, Washington, New Mexico, Assateague Island, Maine, Nova Scotia, Prince Edward Island, Saguenay Fjord, Quebec, Denmark, Germany, Estonia, Russia, Finland, and Sweden. Sharon will be visiting Namibia, Africa during July/August '13 for a two week volunteer mission and 4-day Safari. Before the Safari, she will be helping to teach the San Bushmen children for one week, then volunteer her time at the wildlife sanctuary during the second week. She belives that giving back to people and wildlife is both rewarding and necessary.