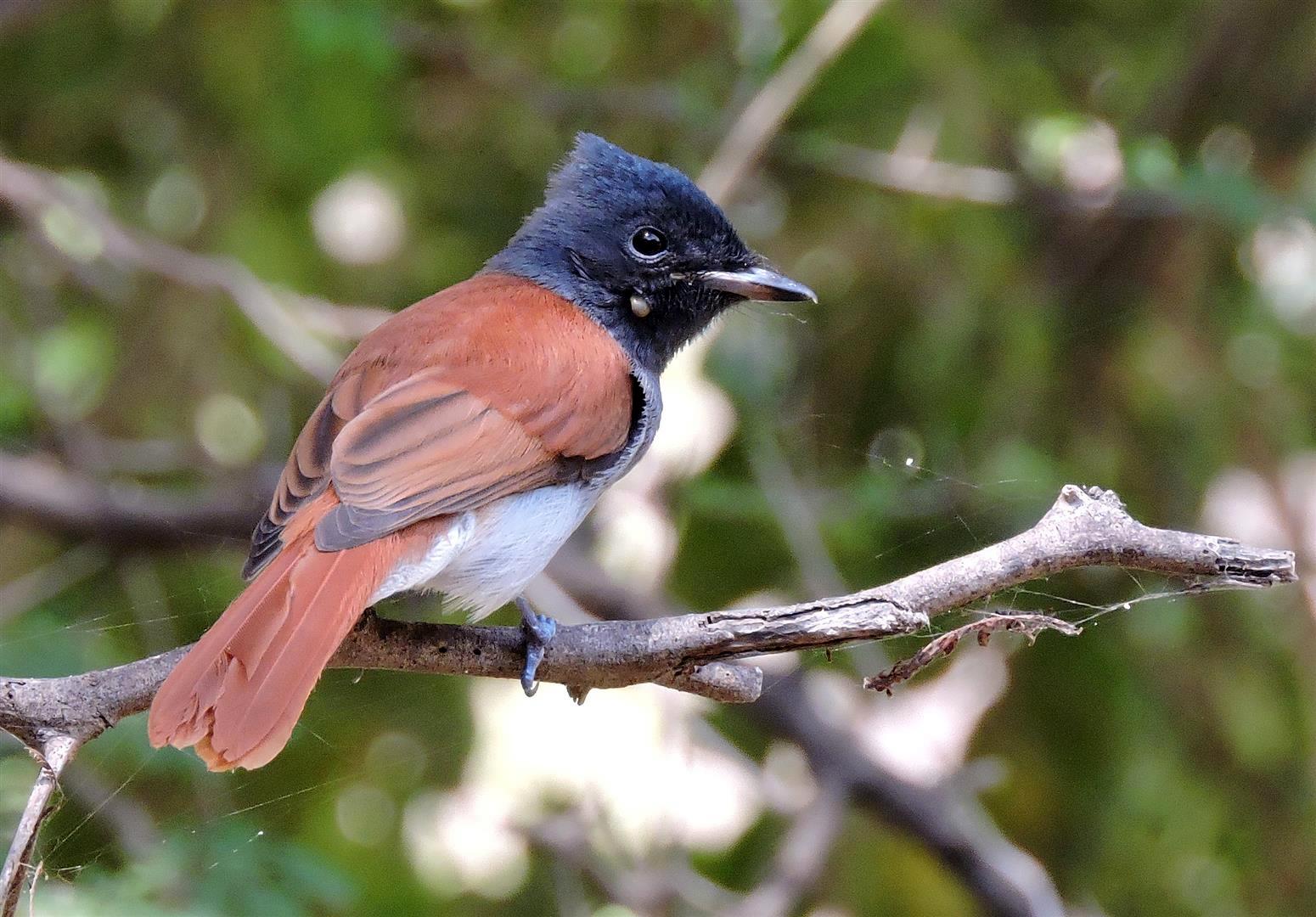 As well as visiting local farms on Friday, I toured some sites east of the city starting at Ayn Hamran. The stop at Ayn Hamran was relatively short but it is never uninteresting.

Though there were no wintering birds seen yet apart from a couple of common sandpiper and a grey wagtail.

It’s always a good place to see many of Dhofar’s afro-tropical birds.

There was one of the tamest African paradise flycatcher I have yet come across.

Ironically they migrant to east Africa around the time as the main season for foreign birders starts. Most visiting birders don’t get to see them. Having said that three birders at Ayn Hamran were there and would have got there chance.After Ayn Hamran I paid a long call into Khawr Rori where incidentally the water level is much lower than this time last year.

This hasn’t stopped a large attendance of members of the heron family. There were over 30 grey heron and smaller numbers of squacco heron, western reef heron and glossy ibis in the central parts of the khawr as well as one Eurasian spoonbill and Indian pond heron.

This time the most common tern was Caspian tern with a few white-winged black tern and at least one gull-billed tern.

Although there were still garganey on site, the most abundant duck was now northern shoveller. I expect more variety of ducks gradually over the next 10 weeks. Indeed along with more common ducks, ruddy shelduck, common shelduck and red-crested pochard have been observed at Khawr Rori ocassionally in some winters and none of these three is on my Oman list.

northern shoveller and one glossy ibis

Khawr Rori is a good place to see black-tailed godwit all winter along with many other shorter legged and shorter billed waders.

While I saw many heron in the central part of the lake, a single purple heron was hidden away at the north end.

After Khawr Rori I moved on to Ayn Asheer which is half way up the hill side from Mirbat. It is often wrongly described as Wadi Hanna by some birders.

Local people assure me the ayn is in Wadi Asheer. The true Wadi Hanna is at the top of the mountain.Unfortunately bird records come from both places using the same name.

Ayn Asheer is a small site but quite magical. It is shaded and the ayn is dammed to keep the water back.

The water itself attracts birds to drink including Arabian golden winged grosbeck though I haven’t seen them there. The rest of the site consists of tall trees which the sun dapples through.

I find it is best to just sit in one place, stay still and watch. Birds come to drink and others to forage in the shade.A grey wagtail was walking around the water all the time I was there.

Tristram’s starling and rock dove were among the species that came to drink.

Two Turkestan shrike were present but they aren’t very fussy about habitat and can be seen almost anyway in Dhofar at the moment.

However for me the best sightings were nightingale. Actually I counted six and all were of the eastern sub species.

nightingale on the ground near me

Nightingale and thrush nightingale will sing on passage and winter. This is presumably because they are territorial in confined spaces with other males around. Indeed I heard singing while I was there.

I don’t know whether part of this dynamic explains why one nightingale confined itself to the ground near me and kept walking around like a bush robin rather than spend time in the nearest tall tree (which contained another nightingale). I suspect the true nature of this behaviour is documented somewhere.

Whatever the reason for the behaviour it was wonderful to see.

I will be returning to this small site more regularly this winter.As it was getting late, I decided to return to Khawr Rori but this time to the north west corner.This is the part accessible from the main road and where I have had success seeing both Spotted crake and Baillon’s crake recently.

As I walked the 100 metres between the parked car and the spot I wait for crakes, I walked into a party of Arabian partridge.

It was almost pitch dark before I saw a spotted crake. Once again I failed to see a little crake which is my main reason to come there.

Little crake has avoided me in both Saudi Arabia and Oman. It’s true nemesis bird for me.

Other than the spotted crake, there were two common snipe, one wood sandpiper and several moorhen walking around on the flattened reeds straight in front of me.

If a little crake had been there, I would have seen it. I’ll keep trying.