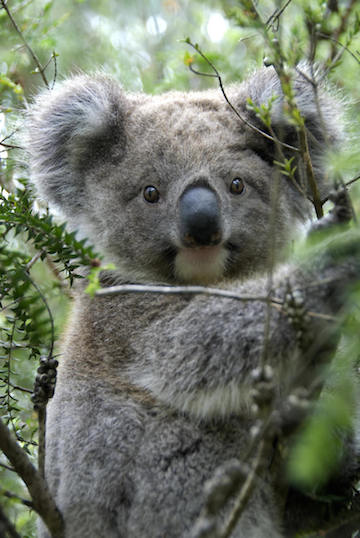 Animals that live in hot climates have various behavioral adaptations to help keep them cool. Kangaroos lick their wrists; rats lick their testicles. New-world vultures urinate on themselves. Humans and horses sweat.

These behaviors all take advantage of the ability of evaporation to lower temperature by transferring heat energy from an animal’s body to the air. However, for animals that live in places that are both hot and dry, using valuable water stores to cool off may put them at risk of dehydration. Now, as described in a new study published in Biology Letters, it seems that koalas have figured out a way to stay both cool and dry: by hugging trees.

Koalas (Phascolarctos cinereus) are arboreal marsupials that are native to eastern Australia. They depend almost entirely upon eucalyptus trees for shelter and food. Because eucalyptus leaves have very limited nutritional content, koalas are sedentary creatures that sleep for up to 20 hours of the day, often by splaying spread-eagle along large branches.

Researchers from universities in the U.S. and Australia decided that perhaps this sleeping style had more to it than met the eye, so they used thermal cameras to photograph koalas napping at French Island in the state of Victoria. They found that hugging trees enabled koalas to lose 68 percent of their excess body heat.

“When we took the heat imagery it dramatically confirmed our idea that ‘tree hugging’ was an important cooling behavior in extreme heat,” said Michael Kearney of the University of Melbourne.

The authors believe the koalas were able to keep cool because the trees remain significantly cooler than the ambient air temperature.

“We found trunks of some tree species can be more than five degrees Celsius cooler than the air during hot weather,” said lead researcher Natalie Briscoe, from the University of Melbourne.

Although koalas are listed overall as Least Concern by the IUCN, several populations have experienced significant declines. In Queensland, koalas have declined 40 percent; in New South Wales, they’ve declined 33 percent. The largest threat to the species so far has been habitat destruction. However, Australia is set to experience significant temperature rises due to global warming in the coming decades, which may further impact the heat-sensitive species.

“About a quarter of the koalas in one population died during a heat-wave of 2009,” said co-author Andrew Krockenberger, of James Cook University. “Understanding the types of factors that can make some populations more resilient is important. Access to cool tree trunks would significantly reduce the amount of heat stress for koalas.”

In addition to habitat for koalas, the researchers believe that many other species use trees as refuges during hot conditions. They suggest that trees could be used to reduce the local impacts of global warming on many animals.

“Cool tree trunks are likely to be an important microhabitat during hot weather for other tree dwelling species including primates, leopards, birds and invertebrates,” Kearney said.

“The availability of cooler trees should be considered when assessing habitat suitability under current and future climate scenarios.”

This article was written by Morgan Erickson-Davis for Mongabay.com