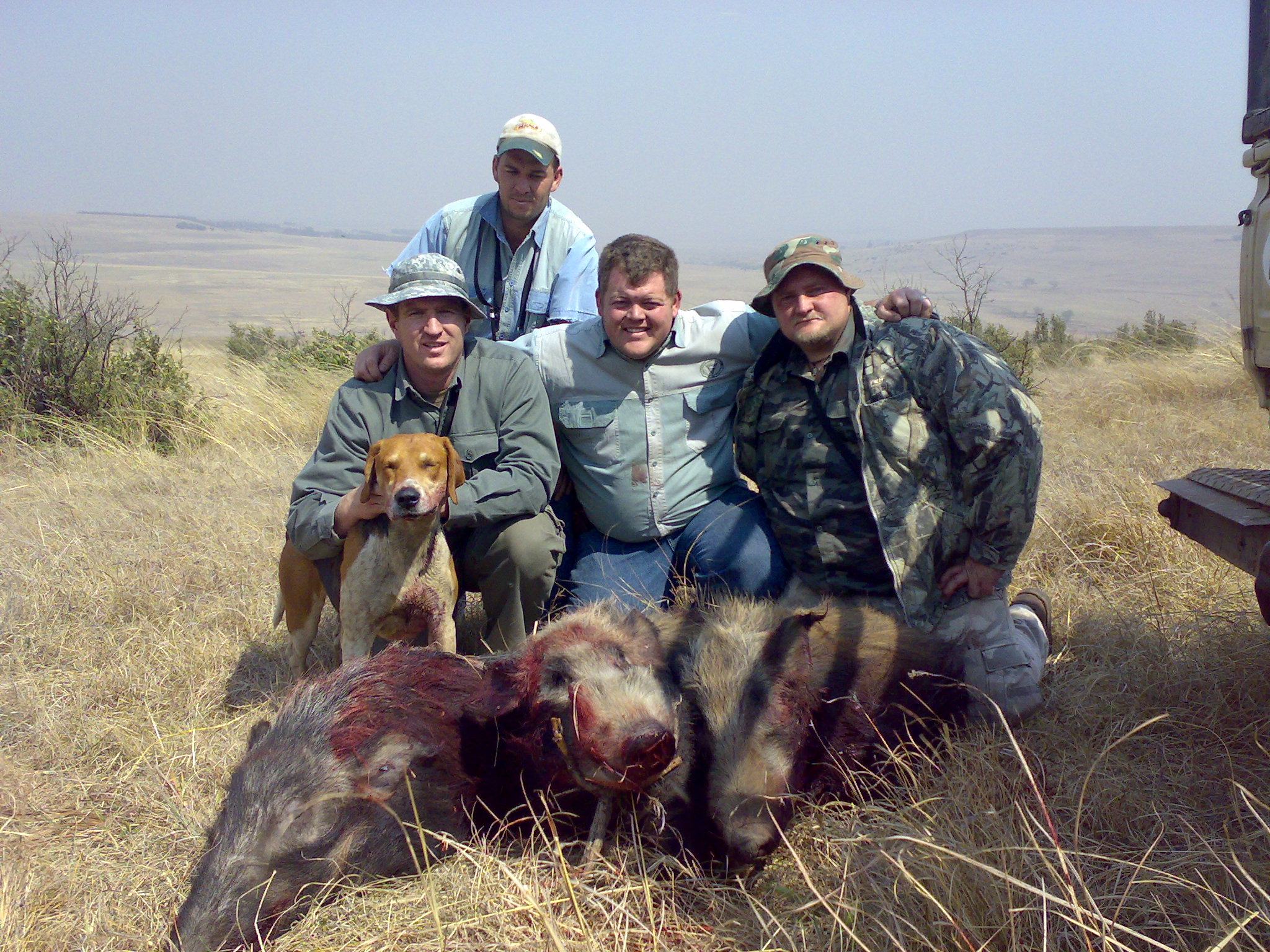 Frikkie du Toit runs a camp in South Africa, which today is still surrounded by African wildlife. Frikkie is a hunter and guide who was born and raised in Africa. He has been hunting wildlife in Africa for 20 years and has guided clients on hunts for all of the Big 5, the Dangerous 7 and all wildlife species of the plains.

Participants in such hunts include Doug Hamric, Pat and Nicole Reeve, Jim Hall, Jim Barnworth. The Spanish King Juan Carlos was criticized for hunting elephants and other wildlife species in Botswana in 2012 for which he later apologized. (see photos below).

Knowing that as few as 32,000 lions are left in the wild and 600 lions are killed every year on trophy hunts, The United States government is considering whether to add lions to the list of species protected by the Endangered Species Act. Which type of recreation do you think generates more revenue for the economy of South Africa?

Can these two activities exist in parallel, and is wildlife hunting really sustainable? Please let us know your opinion and leave your comments below.

KARMA SOMETIMES I DO THINK CREATION MADE A MISTAKE

Kill yourself if you think killing animals is "very nice".

These sadistic psychopahts are too dumb to see how mentally sick they are and what revolting stinking maggots they have become from their mental sickness!

The worst animal on this planet, is the human, they will hunt for fun and not for food, where as animals hunt just for food, this is an outragious so called excuse for a sport and should be banned full stop, it is causing alot of publicity and its not good for the countries involved with promoting it !!

The filthiest of the human race, all displayed in one place.

It takes more skill and courage to take a good photograph of a wild animal – if these morons could only understand this fact. What are they trying to prove about themselves?? Professional hunters use the excuse that the proceeds of the very expensive licence fees help protect wild life more likely this money ends up in corrupt bank accounts- highly selfish attitude.

I WISH ALL THESE MOTHER FUCKERS DIE A SLOW, AND VERY PAINFUL DEATH

These people are the scum of the earth and do not deserve to be alive. They are no different from serial killers and I hate them intensley

I am glad to see you know the truth about the ecological situation in Africa, that trophy hunting is the only hope for wildlife to survive in Africa. Ironically, American hunters, because they do not know what you are talking, are also among the ignorant morons who wrongfully condemn the necessary trophy for needed for conservation in Africa!

Really sad and unnecessary people should find better things to do with their money. Give to the starving kids in the world and do something nice for a change in your sad lives……

I hate you all murderers, I would like to drop you all there without no protection or guns. Kill for fun should have death penalty

Humans on all pictors are so ugly,dirty,evils .Are they mutants ?GMOs ? or what is wrong with these humans ? How they can be so ugly ?

VERY SAD AND DISGUSTING> karma will get them.

I just want to cry. I don't know how all of these people can pose for these pictures, smiling, knowing they killed these beautiful animals in cold-blooded murder. 🙁

Awsome! I'm going down next year

Looking at all this again, it is interesting to see how 'unmarked' the lions' faces are, not scarred like truly wild lions. I have to assume these were canned lions, trained to sit and pose in the right position for the best shot. Pathetic doesn't even begin to describe the people pulling the triggers, and unquenchable greed the people who make all the arrangements to let is happen.

Was it so amazing in Kenya Adrian? It's my dream to go there..eventually to live there…want to do conservation work I hope..

Wow!! When u ignorant people go over there to shoot animals for "sport" u r not just killing that animal. If u kill a male lion in his prime he is probably leader of a pride. With him gone nomad males will come and kill every cub that is his to put the females back in estrus so he can mate with them. Who are we to decide to take lives? I think it's absolutely disgusting that people go to Africa on vacation and then murder animals…especially endangered animals. Why not go to see what life was like before humans… Read more »

Just wondering what the reactions of the general population would be to seeing the corpse of their favourite racehorse, or even shattered remains of public statues or shredded works of art. What would their views be of the grinning perpetrators sitting next to the remains? Maybe there are valid conservation reasons for some of the hunting, but I still find these photos grotesque.

Put your whimpy weapons down and fight like men, then we'll see whose standing over who

I'd love to hunt these sick bastards and strike a pose for a photo right after. Cant believe they can smile after killing an animal for fun…

Take their guns away and they won't look so brave! I know more than a few like them…

Well said Meastro… As I always say "real men do it with cameras"!

Inadequates, the lot of them. There is never any excuse for killing a predator, except in self defence and I doubt any of these people got near enough to their prey to be in any danger. They should try it unarmed with just a camera in hand – now that is fun, and the animal gets to hang around to be seen by other people and create the next generation.

I just don't get it all ! Why would you want to do this?! Why? Do they show their friends and family these photos? They could do so much good with their money but they just want to destroy so sad 🙁

What pleasure do you take in killing these animals? Wild animals are not on this planet for our bloodlust and whimsy. They should never be hunted for trophies. Given this arrogant, narcissist view of this hunters its no surprise the global environment is deteriorating rapidly.

Wish to have some White men heads hunged on my living room's wall ….. tell me when i can came to hunt some fat tourists

How to act on stopping this??

What the fuck….how abt having a shooting competition and these people are being shot…..I cant believe this…!!

I see A LOT about the hunting…but nothing showing that the meat is going to locals!!! WHY?

Hey, I have a theory, if you the "pro" hunters and the dickhead poachers wouldn't exist, these animals would have no problem.
You tout "industry", privatization and whatnot, all for satisfying your perverted need to kill.

The only reason SOME hunters care about animal's fate is for them to still have something to kill, not for the animals themselves.

Stop advertising this care as responsibility. You're a bunch of savages, just admit it and move on.

You can almost smell their redneckness (word just invented).

bunch of sicko's no respect for wildlife. We need to learn to share this planet with the wildlife around us. We are the worse species on earth! We kill everything including each other. If we can not stop this type of sport we are in big trouble.

Chris Hallamore, it is the trophy hunters who are killing the strongest and best for their trophies. How can you claim it is because of these idiots that we still have the few endangered large animal species left? It is exactly because of trophy hunting that entire species of large animals are in decline. What kind of moron kills a magnificent wild animal simply to hang its head or horns on a wall? There is absolutely no justification for the mindless murder of these animals and you should be ashamed of yourself for having the gall to defend such barbaric… Read more »

the all should be hunted scum

Kristen McMahon I don't believe it one bit!!!! If that's the case, then why do they kill elephants and rhinos? To keep them from overpopulating? Last time I check they were endangered…not just endangered but critically.

If you aren’t going to eat something … don’t kill it. And if you are going to kill it you shouldn’t be allowed to use a weapon that gives you such an advantage.This is purely and simply about the sadistic pleasure these ‘people’ get from killing such powerful animals….. a competion that in reality if it was fair would see them dead. Mindless killing… nothing to do with population control or anything similar….it’s a disgrace.

Chris Hallamore The reason why there are no lions is because they are being hunted to extinction. In 50 years the population has decimated from 350.000 to 20.000, do the math before you make stupid statements like this. Nature can handle itself just fine and did so long before humans were here. It's only thanks to humans the balance is gone, leave them alone! This planet does not belongs to us, these animals share it with us, deal with it or leave! Trophy hunting is WRONG, no matter what excuse you use!

Majestic animal slaughtered by men with no dicks…that ain't nothing to be proud of dickheads.

Mostly agree with Kristen's comment. But selling the right to hunt these animals, even if it generates much needed money for conservation efforts, only feeds the demand for trophy hunting. Culls are necessary sometimes, but best handled by trained staff and not sold off to the highest bidder. Now, that does nothing to ease the funding crunch, but that's a bigger issue.