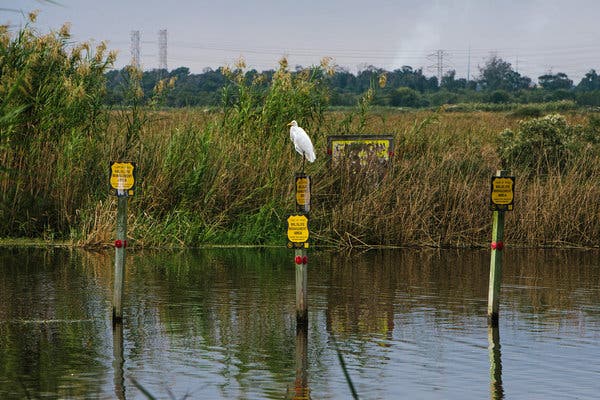 WASHINGTON — The Trump administration on Thursday moved to drop the threat of punishment to oil and gas companies, construction crews and other organizations that kill birds “incidentally,” arguing that businesses that accidentally kill birds ought to be able to operate without fear of prosecution.

Conservation groups said the proposed new regulation from the United States Fish and Wildlife Service, which operates under the Department of Interior, would substantially weaken the Migratory Bird Treaty Act of 1918 and put millions of birds in danger. The threat of fines and prosecution has, for decades, helped prod industries to take steps to protect birds, like affixing red lights on communication towers, they say.

But industry leaders and administration officials said they expected businesses to continue to voluntarily protect bird habitats. Removing the threat of punishment, they said, would bring regulatory certainty and eliminate legal disputes over whether the law covers birds killed unintentionally, whether from an oil spill or the blade of a wind turbine.

Aurelia Skipwith, director of the Fish and Wildlife Service, called bird conservation “an integral part” of the agency’s mission. By specifying that entities should be held liable only if they can be proven to have set out to kill birds, she said, “we are taking action today to make sure our rules and regulations are clear.”

The proposed regulation, if finalized, would cement a legal opinion that the Department of Interior issued in 2017 that previous administrations had interpreted the law too broadly and that only actions explicitly intended to kill birds should be forbidden.

That interpretation has already had significant consequences for migratory birds. According to internal agency documents recently obtained by The New York Times, the Trump administration has discouraged local governments and businesses from taking simple precautionary measures to protect birds, and federal wildlife officials have all but stopped investigating most bird deaths.

With a presidential election coming in November, the Trump administration is moving quickly to finalize dozens of regulatory rollbacks and other actions to weaken environmental protections viewed as burdensome by industry.

In recent weeks, the administration has scrapped a clean water regulation aimed at protecting streams and wetlands, and blocked an effort to require Americans to use energy-efficient light bulbs. Within the next month, the administration plans to weaken vehicle emissions standards and a rule restricting mercury, a toxic chemical emitted from coal-burning power plants. Completing the rule curtailing the Migratory Bird Treaty Act before the November election will be difficult, but the agency has indicated it will push aggressively to do so.

“It’s a race against the clock,” Bob Dreher, senior vice president of conservation programs at Defenders of Wildlife, an environmental organization, said of the proposed regulation.

Any legal guideline, like the one now governing bird-death enforcement, can be easily overturned; the 2017 opinion on incidental avian deaths reversed guidelines written by the Obama administration to enshrine the government’s ability to fine and prosecute those who accidentally kill migratory birds. Mr. Dreher noted that codifying the opinion into regulation, as the Trump administration is trying to do, would make it harder for a future president to issue a quick reversal.

“They’re trying to entrench this as much as they can, and get stuff locked into place,” he said, but added, “We’re going to fight it.”

Six conservation groups and eight states have already sued to block the underlying legal opinion. Last week, a group of former Interior Department officials from both Republican and Democratic administrations filed an amicus brief in support of the lawsuit.

Oil industry representatives said that they have worked voluntarily to protect birds and would continue to do so. They also accused the Obama administration of abusing the law by singling out oil and gas companies for prosecution. The new rule, several business leaders said, brings regulatory certainty to companies worried that bird deaths would make them criminally liable for millions of dollars.

Erik G. Milito, president of the National Ocean Industries Association, which represents offshore oil and wind industries, called it “welcome news for safe and responsible energy development.” He said the proposal would prevent “the unnecessary criminalization” of accidental bird deaths that he said had blocked or slowed energy projects.

The Migratory Bird Treaty Act makes it illegal “by any means or in any manner” to hunt, take, capture or kill birds, nests or eggs from listed species without a permit. Beginning in the 1970s, federal officials used the act to prosecute and fine companies up to $15,000 per bird for accidental deaths on power lines, in oil pits, in wind turbines and by other industrial hazards.

In 2010, the Deepwater Horizon disaster killed 11 people and spewed more than 210 million gallons of oil into the Gulf of Mexico. Hundreds of thousands of birds were killed, and BP agreed to pay $100 million for criminal violations under the Migratory Bird Treaty Act.

Under the current legal guidance and the proposed regulatory changes, that episode would no longer trigger criminal liability because the birds were killed unintentionally. Illegal acts are also protected under the plan. For example, a farmer who sprayed a banned pesticide that killed birds would not be held liable as long as the birds were not the “intended target.”

The rule will appear in the Federal Register on Monday and the public will have 45 days to comment on it.

This article was first published by The New York Times on 30 January 2020.