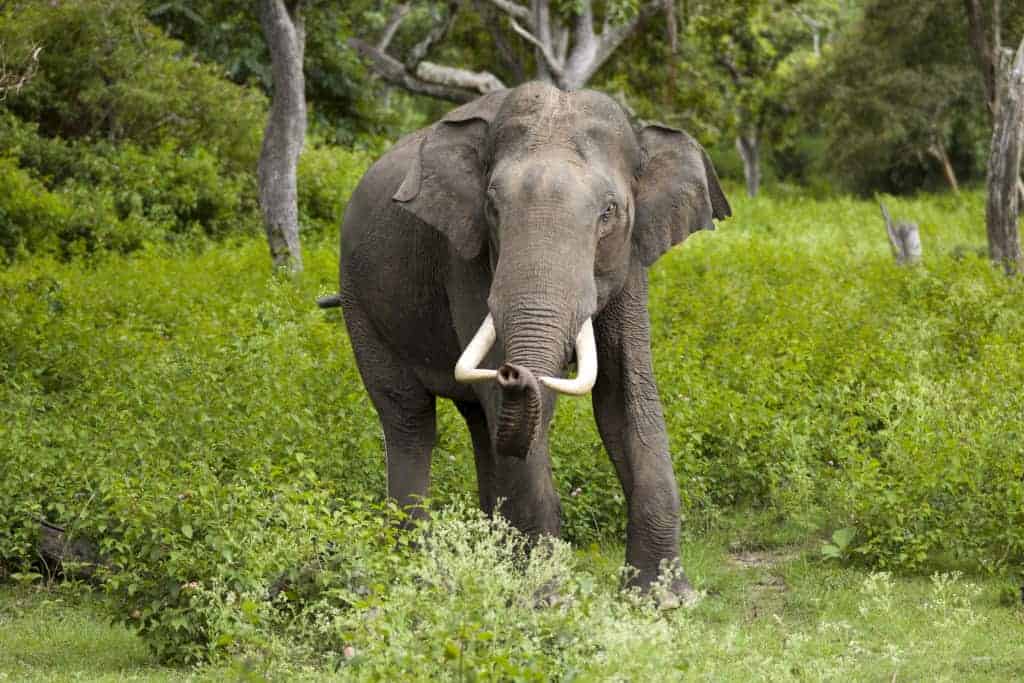 In India, millions of people live alongside Asian elephants. Generally, they interact peacefully. But sometimes encounters can turn deadly.

The stakes are particularly high in the southeastern Indian state of Tamil Nadu. Between 1994 and 2013, 41 people there lost their lives in encounters with elephants. But now, new technology is helping prevent such deaths: An early warning system texts residents if elephants are near.

The system is good for elephants, too, says M. Ananda Kumar, a scientist with the Nature Conservation Foundation in Valparai, Tamil Nadu. Although elephants are legally protected in India, that hasn’t stopped people from retaliating after loved ones are trampled or houses are damaged.

In the last 18 months, there have been no reported injuries or deaths from elephants, and Kumar credits the warning system for this.

We spoke with Kumar about the program, which he helped develop with the Nature Conservation Foundation.

How did your team come up with the idea for an elephant early warning system?

When we looked at all the human fatalities due to elephants, one thing that came up prominently was most people were unaware of the presence of the elephants.

During the daytime there is a lot of activity in the tea plantations that dominate the landscape, so the elephants are stuck in forest fragments. Night is the only time when they can move from one patch to another. But that’s when people are often walking back to their homes from town.

At first we started informing people directly that there were elephants in the area, so they could be careful. But that was very tiring. So in 2006, we started putting information about elephants on the local TV channel. We wanted to reach even more people, so we started gathering phone numbers in 2011. Slowly people have been seeing the benefits of the alerts, and now we have 3,800 numbers in our database.

How does it work?

When someone signs up for the text alert we also collect information on where they live, so we can let them know when there are elephants in their area. But it’s not just about one-way communication between us and people. We want to build a network, in which people talk to each other [about where elephants are].

For those with phones that don’t support Tamil, the local language, or have screens too small to read texts, they can listen to a voice message. We are also installing systems in buses that broadcast warnings through speakers when elephants are seen nearby. Many accidents happen when people are walking from the bus stop to their home. And in 28 areas with poor visibility we have set up bright lights that flash when elephants are nearby, in order to warn people.

Once someone learns that elephants are close, what do they do?

It works in multiple ways. People can go inside. Or if a person is outside and is traveling to his residence, he or she can take extra precautions. They can avoid going through areas with poor visibility or ask someone to go with them. If people don’t know where elephants are they will keep walking and it might be too late by the time they see the animals.

Based on our messages, the local range office can also send teams out to protect people and property.

You’ve said elephants don’t threaten tea plantations, but do they threaten other plantings or buildings?

Yes, elephants cause damage to buildings and houses. Most of the damage happens on the kitchen side, because they are looking for something in there to eat, such as salt or rice.

Most of the homes in the area are owned by the tea companies, which provide them for their workers. So the companies handle any repairs. They also receive our alerts and have teams dedicated to preventing interactions, because an elephant knocking down someone’s house is not a pleasant thing.

Have people tried other methods of repelling elephants, such as dogs?

People keep their dogs inside their house because of danger. Leopards pick up dogs. And if a dog barks at an elephant it will charge.

Have the alerts changed how people view elephants?

In the past, when someone died [due to an elephant interaction] people started blaming the animals, instead of the circumstance. But now people are getting to know elephants better and learning how to avoid coming into contact with them. That gives them confidence that elephants are not there to kill people. People are more afraid of what they don’t know.

In the past, after elephants caused deaths, people striked against the government, demanding they do something about them. Now people tell us the elephants should be left alone, because the messages are working.

This article was first published by National Geographic on 29 Dec 2015.

Thanks for the article. It's good to know something is being done to help keep humans and elephants safer.