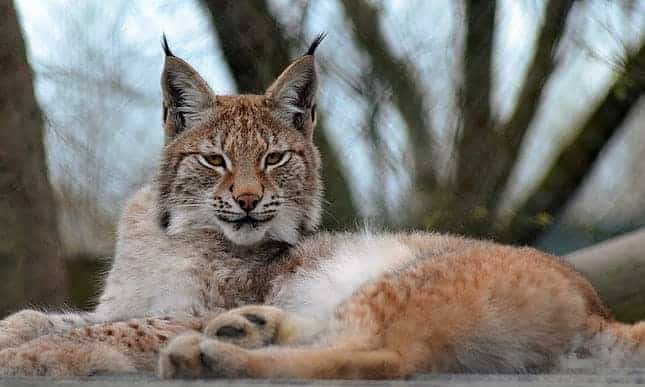 The Welsh zoo that owned Lillith the lynx says it is devastated and outraged at the killing of the escaped cat, which had been on the run for almost a fortnight.

The Eurasian lynx was destroyed after straying near Aberystwyth town centre following its escape from Borth Wild Animal Kingdom.

The animal park said in a statement posted on Facebook on Saturday: “The decision to kill her was not ours and we in no way agreed to, or participated in, the shooting of our baby lynx. We are truly devastated and outraged that this happened.”

The female, which was about twice the size of a domestic cat, had been missing from the park in Ceredigion, west Wales, since 29 October.

The park had said the 18-month-old lynx did not pose a danger to humans, but warned the public against getting too close. There have never been any recorded attacks by a lynx on a human, according to the park.

The death of the lynx has sparked concern from animal rights groups, which have also questioned the ethics of keeping animals in zoos.

Mimi Bekhechi, director of international programmes at Peta (People for the Ethical Treatment of Animals), said: “Lynxes, like all animals – humans included – want to be free. When animals who have been imprisoned, like Lillith, see an opportunity to escape their dreary lives, they often take it. Sadly, these acts of liberation are often their last, as most once-captive animals who attempt to follow their natural instincts are killed.”

The RSPCA said the supposed benefits of conservation, education and research that zoos claimed to provide did not outweigh the costs to these animals, which often have shortened lives in unsuitable conditions.

“This is a very tragic incident. Keeping wild animals in captivity is a highly emotive subject and we are concerned about all animals in zoo collections,” an RSPCA spokesperson said.

Officials had warned that lynxes were wild animals with sharp teeth and claws and “will attack if cornered or trapped”. There had also been allegations from farmers that the lynx had killed sheep while on the run.

However, staff from the zoo cast doubt on these claims. “If she had been eating sheep she would look like Garfield,” said the zoo’s owner, Dean Tweedy.

“There are dogs, foxes and badgers around here. We don’t believe Lillith is to blame. The reports are nonsense.”

There were several sightings of the cat during an operation by keepers, assisted at times by a police helicopter, to return the animal to the park, which is about six miles from Aberystwyth.

However, Ceredigion council said the decision had been taken to humanely destroy the wild animal after the risk it posed to the public increased to “severe” following failed attempts to recapture it.

In a statement, it said: “It is with deep regret that Ceredigion county council reports on the humane destruction of the Eurasian lynx that recently escaped from Borth Wild Animal Kingdom.

“Despite exhaustive multi-agency efforts to recapture the class-A animal, the multi-agency group responding to the incident received additional advice late on Friday afternoon, 10 November, from a specialist veterinary surgeon that the risk to public wellbeing had increased from moderate to severe due to the continued failure of the Wild Animal Kingdom to recapture the lynx.

“The safety of the public was paramount and therefore once the lynx had strayed over to a populated area of the community it was necessary to act decisively.”

Ceredig Davies, councillor for Aberystwyth central, where the lynx was killed, assured people on Facebook that he “was not party to the action taken”.

He added: “I and other councillors cannot absolve ourselves of the actions taken by the authority. My expectations and what I will be asking for is that following a full investigation, a report will be presented to councillors on how this unfortunate animal met its end in this way.”

Dozens of people replied to the council’s press release, posted on social media, criticising the killing of the animal.

One wrote: “If you are at range to fatally shoot the animal could you not have sedated it and taken to a responsible keeper?”

Another said: “Such a shame that it had to come to this. How is any sort of destruction of a healthy animal humane? And Ceredigion council her name was Lillith, not ‘the lynx’. So disappointed!”

The young lynx was last seen in her family’s enclosure on 26 October. At first, staff thought Lillith may have clashed with her mother, Dee, and was lying out of sight.

On the morning of 29 October zookeepers went to check on Lillith to find she had disappeared.

She is thought to have climbed a spindly sapling growing in the pen and dived over a four-metre fence and two electrified wires, possibly in pursuit of a bird.

Staff with thermal imaging equipment, nets and cages baited with rabbit had been scouring the hillside and the gardens of the seaside town in search of the animal.

Zookeepers had managed to get within metres of the lynx throughout the week, but she remained just out of their grasp.

A team of trackers armed with tranquilliser darts had also been on standby.

This article was first published by The Guardian on 11 Nov 2017.