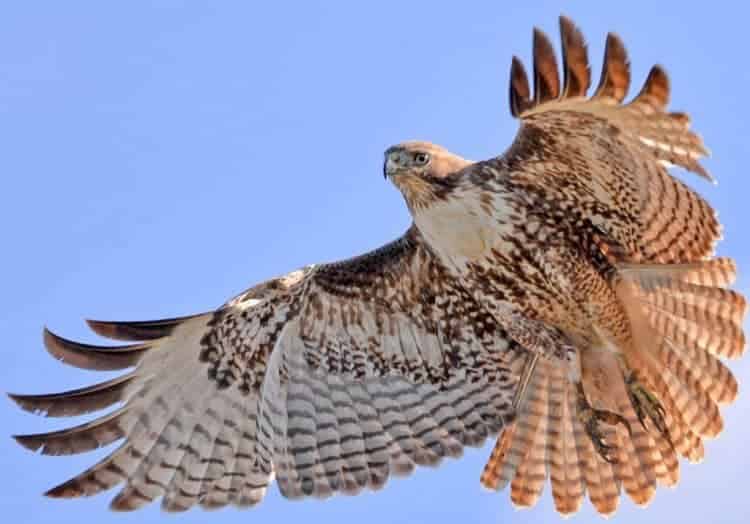 “Every day I said ‘I wouldn’t count on him being there tomorrow!’ But it’s been six weeks and he’s still adapting,” said David Hancock, an eagle biologist who started the Hancock Wildlife Foundation. Since early June, Hancock has been monitoring a red-tailed hawklet that seems to be, despite all odds, surviving in a nest full of bald eagles.

Hancock and his team have nicknamed the young hawk “Spunky,” “because he’s full of spunk!” says Hancock’s assistant Karen Bills.

Spunky first made headlines after being spotted in an eagle’s nest in British Columbia. The two raptors are bitter rivals in the wild. It’s likely the hawk was dropped into the nest after the eagles preyed upon its parents, but biologists believe the bird’s upturned beak and squawks for food may have triggered the eagles’ parental instincts.

When National Geographic first wrote about Spunky, it didn’t seem likely the bird would survive for long. Biologists feared fratricide from one of the hawk’s two eaglet siblings, but an abundance of food in the protected wildlife area likely saved Spunky from predation.

The enterprising hawk’s biggest dilemma now seems to be whether or not it will realize it’s just that—a hawk.

In an interview with the Vancouver Sun, raptor specialist David Bird explained that he thinks the hawk has learned to identify as an eagle.

“This guy has definitely imprinted on bald eagles, and thinks he’s a bald eagle. The eaglets that he was raised with seem to have accepted him as another sibling, and the parents seem to have adopted him as their young,” Bird told the Sun.

In the coming weeks, the adult eagles will leave the nest and fly north on the migratory route to Alaska, where they feast on beached salmon. Soon after, the eaglets will follow.

Red-tail hawks however, typically don’t leave the region. They feed on nearby rodents, rabbits, and snakes.

Thus far, the hawklet has shown a lot of gumption when it comes to feeding. It was previously fed by its adoptive eagle parents, but Hancock has observed it weaving through the eagles’ legs to steal food. He noted he even saw Spunky steal a flounder from one of the eagles and fly away from the nest with it.

Hancock hasn’t given up hope that the young hawk’s instincts will kick in. He’s observed him swooping down and picking up forest debris like pinecones and sticks, a behavior seen in young hawks as they learn to swoop down on scampering prey. The hawk has also been bullied by its siblings, which Hancock hopes will encourage the bird to avoid future eagles in the wild.

Bird watchers and area residents have thrown Spunky mice and roadkill that was readily picked up. However, the young hawk hasn’t yet made the leap to hunting on its own.

Hawklets typically learn this behavior from their parents.

Legally, Hancock and other Spunky sympathizers must leave the hawklet alone. British Columbia’s Wildlife Act prohibits taking or possessing a raptor or its nest.

Hancock thinks the biggest danger the bird now faces is being too comfortable with eagles, which have killed hawks.

“He only needs one error and he’s dead,” Hancock said.

This article was first published by National Geographic on 25 Jul 2017.

How is he doing now?

Uau is a survivor

This is so amazing. Please keep track of Spunky if you can!