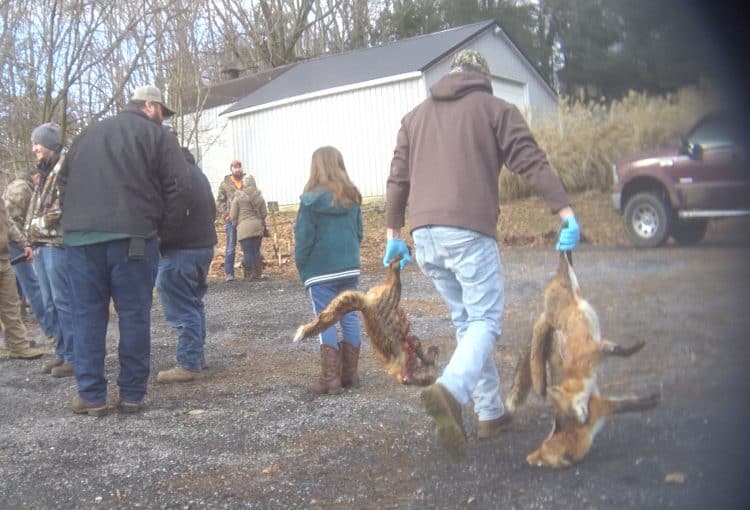 Dead foxes were piled high in the pickup truck after the hunting contest in Frederick County in January. Men lifted the bloodied animals out of the truck by their legs, dropping them on the ground to be counted.

The winner of the contest killed 38 foxes and won about $400, said the undercover investigator for the Humane Society of the United States whose graphic video footage of the event was made public last week.

Such hunting contests are legal in Maryland and 44 other states. The Humane Society is aiming to change that, pushing legislation in statehouses across the country that would bar the killing of “fur-bearing mammals” — such as foxes, coyotes and raccoons — in competitions that offer cash prizes.

“When it’s deer or turkey, hunters will donate or eat it, but this is different,” said state Del. Dana M. Stein (D-Baltimore County), who is sponsoring a bill to prohibit such contests in Maryland. “It just seems like a cruel and inhumane practice.”

Arizona, New Mexico, Vermont, California and Massachusetts have outlawed wildlife-killing contests in recent years following pressure from animal rights advocates and professionals in wildlife management, who argue the events are celebrations of slaughter with no scientific basis. Bans have also been proposed in New Jersey, New York, New Hampshire and Colorado.

Stein’s bill will have a hearing Wednesday in the House Environment and Transportation Committee.

He said the legislation has received support from constituents in Baltimore County. But he is expecting some opposition from communities where hunting is common. Deer are exempted from the bill, in part because of overpopulation concerns from the farming community, Stein said.

Participants in the wildlife contests typically try to kill the most animals, or the heaviest animals, animal rights advocates say. Common targets are predators, including foxes, bobcats and coyotes. Hunters sometimes use automated “calls” that mimic the sound of animals in distress to draw in the prey and make it easier to shoot them.

At the contest in Unionville, Md., a community about 45 miles north of the District, participants said they were “helping the balance of nature” by killing the foxes, said the Humane Society investigator, who spoke on the condition of anonymity to maintain their undercover status.

But Humane Society chief executive Kitty Block said there is no evidence to suggest that wildlife-killing contests are effective methods for animal control. And the investigator said the main purpose for most of the young men who participated seemed to be bragging rights and having fun.

The investigator used a hidden camera to take photos and video of the event, where contestants killed about 250 red foxes, coyotes and raccoons. Participants talked about dumping the animals in a nearby landfill after they were counted, the investigator said. There were children present, including one young girl dragging a dead fox.

A group called Predator Hunters of Maryland organized the event. Administrators of the group’s Facebook page did not respond to requests for comment from a reporter Wednesday. By the next day, the page no longer appeared to be public.

The Humane Society said there was a similar contest this month in the Charles County community of Waldorf, about 25 miles southeast of the District. It is not clear who organized that event.

Her organization began focusing on the issue in 2017 and has identified 600 competitions across the country in recent years, including the two in Maryland this winter. Block noted that Maryland otherwise has very strong animal protection laws.

Christopher Cox, a military veteran and hunting advocate from Cecil County who started the popular Maryland Hunting Addiction Facebook page, said he had never heard of the wildlife competitions. Neither had any members of the page whom he queried, he said.

Cox said most hunters do not target foxes, coyotes or raccoons because they cannot be eaten by their families or donated for food.

He guessed that the competitions were being held in areas where those animals were overpopulated and said “most hunters care deeply about conservation and being as humane as possible while maintaining the guidelines set forth by people who study our animal populations and design programs to keep them healthy.”

Tom Kreiner, who has been hunting in Maryland since 2008, said he agreed that hunters care deeply about conservation and ethical hunts. They might compare who shot the biggest deer, he said, but they do not participate in killing competitions.

Kreiner said he had not heard about the competitions and would be interested to learn more. He said participants could be “out there trying to ruin a longtime sport for the ones who do it legally and truthfully.”

Hunters in Maryland are required to have licenses. To receive them, they must receive a certificate of competence in firearms and complete a hunting safety program.

The investigator said there were no officials checking to ensure that those participating in the two wildlife-killing contests in Maryland this winter had hunting licenses.

This article was first published by The Washington Post on 21 February 2020.