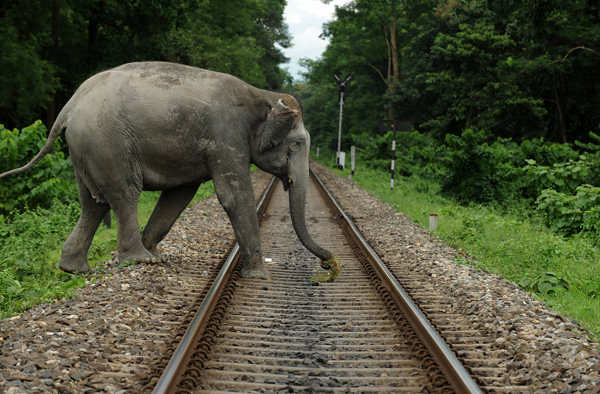 According to official data released by the Ministry of Environment, Forests and Climate Change in India, at least 10 tigers and 36 Asian elephants were killed by speeding vehicles or trains in the country during the three year period from 2014. These figures raise serious concerns as the wild population of tigers and elephants in India are very important for the sustenance of these species worldwide.

Answering a query in the latest session of the Rajya Sabha (the council of states or upper house of the parliament of India) this month, Minister of State for Environment, Forest & Climate Change, Dr. Mahesh Sharma told the parliament that among the 10 tigers killed, 6 were hit by trains and 4 by speeding vehicles.

These figures are of concern since tiger has been notified as endangered by International Union for Conservation of Nature, mainly due to the decline in tiger population worldwide. According to IUCN, tigers inhabit only 6 percent of what used to be their actual habitat range globally. India is the last home to the biggest breeding population of wild tigers in the world.

In a recent incident in Assam, a state in North East India, four wild elephants were killed and one was injured by a speeding passenger train. The herd was moving along train tracks passing through a natural elephant corridor in the area when the speeding train hit them. According to the official data released by the Ministry, elephant causality in train accidents has increased by 133% from 2015 to 2017. Among this, Assam has the highest numbers of elephant fatality caused by speeding trains with 16 elephants getting killed in the state this way since 2014.

Taking note of the rising incidence of wildlife deaths caused by trains, the Ministry has issued a general advisory to all the concerned states to ensure preventive measures like clearance of vegetation alongside tracks, installation of signage boards at select places for alerting train drivers and keeping train tracks free from food waste which attracts elephants and other wildlife. Besides, sensitization programs for train drivers, guards and station masters are also proposed.

Map: Elephant deaths due to train hits across different Indian states during 2014 to 2017

Report and Visualizations by Geeta Kashyap.

Geeta Kashyap is a journalism academician and researcher from India. Formerly a journalist with the Indian daily Hindustan Times, she is a data journalism enthusiast and is presently working on her doctoral thesis on data journalism practice in India.

Trains run THROUGH sanctuaries? This doesn’t even make sense.