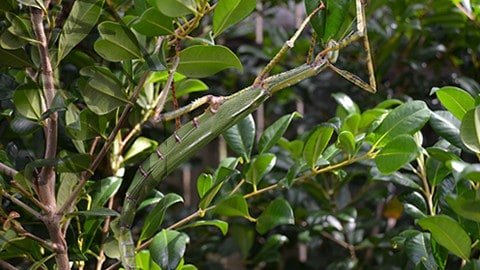 Stick insects (Goliath pictured) have long stick-like bodies that grow up to 50cm in length. Their bodies resemble leaves, sticks or grass, which makes them extremely good at camouflage. They usually have two pairs of wings, but some species are wingless.

There are over 2500 species throughout the world and counting, with 150 represented well in Australia. Stick insects are herbivores and they are fastiduos with their food.

With an interesting biology females lay eggs one at a time, flicking then to the ground. Between 100 and 1,300 eggs are laid in a female life- time of one year. Stick insect eggs are generally oval, and superficially seed- like with an amazing array of textures and ornamentation. Many also resemble tiny urns with lids, and are very attractive to ants. When egg is taken back to an ants nest, the nutritious capitulum (the lid) is eaten and the egg is discarded. This benefits the stick insect eggs as it helps egg dispersal, with eggs buried in ant nests having a lower rate of parasitism from native wasps. Egg incubation varies significantly with some hatching within a few weeks with others remaining dormant for years.

Stick insects are a tasty snack for many animals such as birds, possums, lizards, frogs, spiders and green ants. With so many enemies, stick insects developed some unique defences. Camouflage and randomly dropping to the ground and stay motionless to avoid getting eaten. Some will kick with their spiky legs, flash brightly coloured wings and make hissing sounds to scare away an enemy. Stick insects occasionally drop off one or more of their legs to escape a predator (much like a lizard & geckos loosing their tail in the same manner).

Asian people consider them as good luck insects, some keeping them in their house, however they don’t do good pets, obviously.

In north Queensland the Peppermint Stick Insect Megacrania batesi with an average length of 10cm shoots a jet of white liquid from the back of its thorax into the face of an attacker. So handle with care this one and wear goggles and keep your mouth shut.

It can squirt this liquid over 20cm, the white substance will burn the eyes and cause temporary blindness. The liquid smells exactly like peppermint toothpaste, but I doubt it will taste the same!