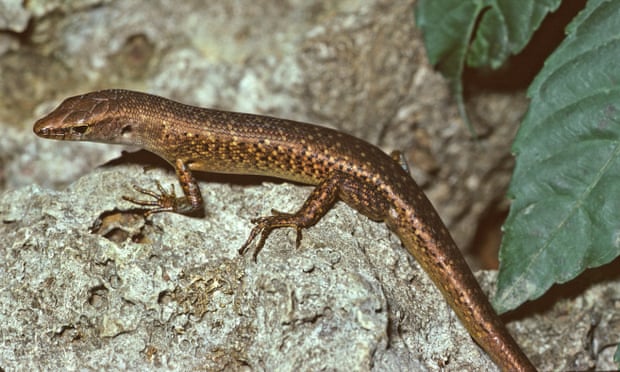 The Australian government has officially acknowledged the extinction of 13 endemic species, including 12 mammals and the first reptile known to have been lost since European colonisation.

The addition of the dozen mammal species confirms Australia’s unenviable position as the world’s capital for mammal extinction, lifting the total number of mammals known to have died out to 34.

None of the 13 is a surprise. All but one of the mammal extinctions is historic, with most having disappeared between the 1850s and 1950s.

But the list also includes two species lost in the past decade, both from Christmas Island in the Indian Ocean.

As Guardian Australia has reported, the last Christmas Island pipistrelle, a species of bat, died in 2009. It was followed by the sole remaining Christmas Island forest skink – the first Australian reptile known to have become extinct – in 2014. Both extinctions have previously been recorded by the International Union for the Conservation of Nature (IUCN).

The updated list means more than 10% of the 320 land mammals known to have lived in Australia in 1788 are extinct.

The Wilderness Society’s Suzanne Milthorpe said there was “not another country, rich or poor, that has anything like this record” in mammal extinction. She said Haiti was next on the IUCN list for mammal extinctions with a total of nine.

Prof John Woinarski, a conservation biologist at Charles Darwin University who helped record the plight of many of the newly listed extinct species in two books, said the listings were “humbling and sobering”.

He said it was a reminder that extinction was a “likely event” after a species was listed as threatened if not enough was done to save it. “It is important to acknowledge that the losses have occurred and it’s a reminder that if we don’t manage our threatened species then extinction is the end result,” he said.

Woinarski said in almost all cases the most plausible explanation for their extinction was predation by feral cats, though introduced foxes, habitat destruction and fire may have played a role. “No other country has suffered anywhere near that number of mammal species extinctions over the past 200 years,” he said.

He said as museums had few-to-no records of the species, recording the extinctions often relied on knowledge shared by Indigenous elders living in remote parts of the country who had experienced them first-hand.

About 100 endemic Australian species have been listed as extinct by the government or the IUCN, but Woinarski said the real number was likely to be more than 10 times that once extinct invertebrates were counted. At least 50 invertebrate species on Christmas Island alone had not been seen for more than a century and were likely to be extinct, he said.

He said the first recorded modern extinction of an Australian reptile was “obviously a really lamentable landmark”. The Christmas Island forest skink was almost certainly killed by the accidental introduction of a predator from Asia, the wolf snake, in the 1970s.

He said the Christmas Island pipistrelle’s extinction was a result of a lack of government action, as it had been clear it was in rapid decline for two decades before it went extinct and the response was insufficient. There had never been an inquest or inquiry to find out what went wrong, he said.

“That was one we really should have been able to save,” he said.

Milthorpe, the Wilderness Society’s national environment laws campaign manager, said the updated list was a “devastating reality check on Australia’s environmental performance”. “It cements our reputation as the global leader in mammal extinctions,” she said.

She said it should drive the environment minister, Sussan Ley, to make a stronger response than what it has offered since a review of the Environment Protection and Biodiversity Conservation (EPBC) Act by the competition watchdog Graeme Samuel.

Samuel found the environment was in an unsustainable state of decline and the EPBC was ineffective and needed an overhaul, including some urgent changes.

“Unfortunately, we haven’t seen a full response to the review from the Morrison government yet, only a disjointed attempt to devolve their environmental responsibilities to the states,” Milthorpe said. “Without the full package [of recommendations], Samuel made clear that extinction and a decline of our iconic natural areas will continue.”

Ley’s spokesperson said the minister had overseen a comprehensive review of the historical extinction list to accurately reflect the state of Australia’s mammals and provide an important record that could help improve the management of native plants and animals.

They said the government had “mobilised” more than $535m for projects to support threatened species and ecological communities since 2014, was preparing a 10-year threatened species strategy and introducing new predator-free safe havens.

“We are working to manage threats to native animals and plants on Christmas Island and across the rest of Australia, including supporting the recovery from the catastrophic black summer bushfires,” the spokesperson said.

Labor’s environment spokeswoman, Terri Butler, said the Coalition was presiding over an “accelerating and disastrous extinction crisis”, and had slashed environment department funding since coming to power. “They have no solutions to this crisis and they just don’t care,” she said.

A groundbreaking study by 38 scientists working across Australia and Antarctica last week found 19 ecosystems were collapsing due to the impact of humans and warned urgent action was required to prevent their complete loss.

This article was first published by The Guardian on 3 March 2021. Lead Image: The Christmas Island forest skink is the first reptile known to have gone extinct in Australia since European colonisation. More than 10% of the 320 land mammals known to have lived in Australia in 1788 are extinct. Photograph: Hal Cogger.