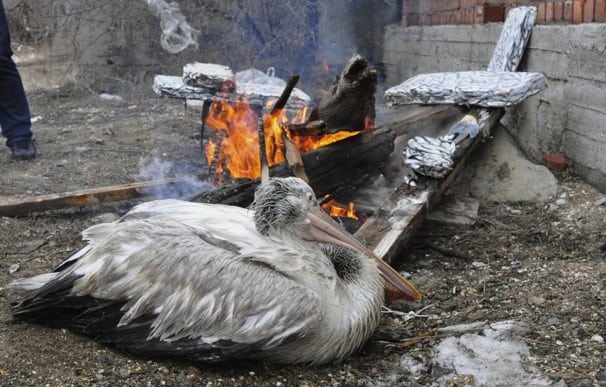 Russian Authorities are scrambling to save hundreds of starving and endangered Dalmatian pelicans after the Caspian Sea froze for the first time in years.

Hundreds of the gray-white birds with distinctive curly feathers at their napes are jostling one another in a rare patch of unfrozen water at a shipyard near the city of Makhachkala, the capital of the southern Russian province of Dagestan.

About 20 birds have died of hunger despite hundreds of kilograms (pounds) of fish that his ministry and a local lawmaker are purchasing daily to feed them, Dagestan’s Nature Protection Ministry spokesman Arslan Dydymov said Tuesday.

The birds are getting sprats from the local market because fresh fish from the iced-over Caspian is not available.

“Yesterday it seemed they ate more than enough,” said Kurban Kuniev of the Dagestan nature reserve.

The birds flew to Makhachkala last week from the frozen deltas of the Volga and Terek rivers up north. Local residents were so excited by the arrival that the guards at the Makhachkala shipyard had to stop hundreds from entering with bread and other unsuitable foods.

“We did not let them in for the sake of the pelicans,” chief guard Magomed Eldarov said.

This article was written by Associated Press and published by the Washingtom Post.