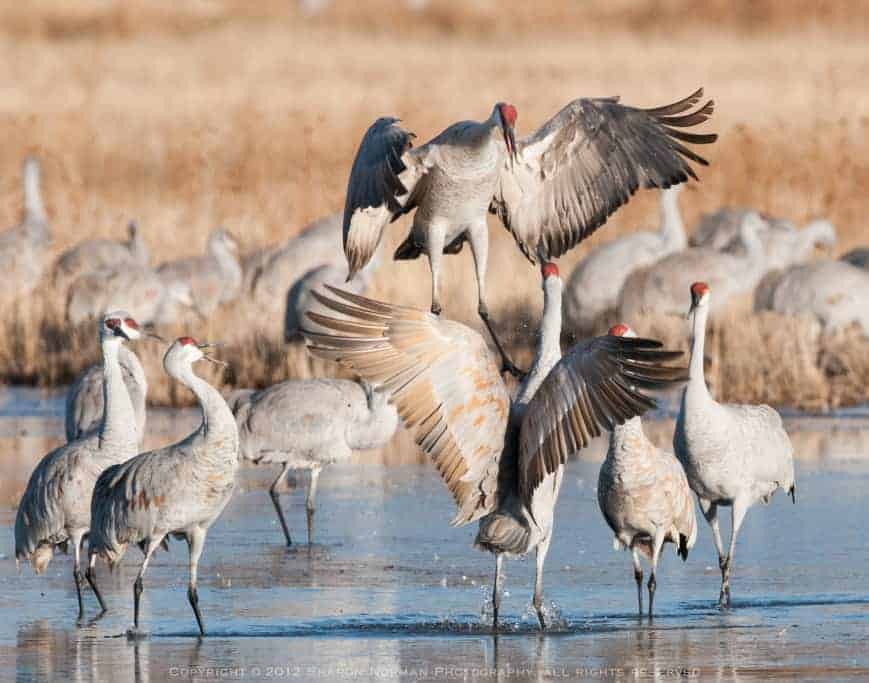 I recently returned from a photo shoot to Bosque del Apache and was in awe at the abundance of Sandhill Cranes.

Having never seen them in Ohio (one of the many species on my state’s endangered list), I was truly amazed by this wading bird’s courtship dance.

The Sandhill Crane’s dance includes jumping up to eight feet in the air, bowing to one another, wings spread outward or inward, and dance-like steps around each other.

Their dancing is an important part of their mating ritual during the spring, but they can be seen any time of year performing this graceful dance.

Sandhill Cranes are a monogamous bird having one brood a year with an average clutch size of two eggs. Breeding typically occurs during the months of April and May, with hatchlings approximately one month later. They are dependent on wetlands and typically roost in moist bottomlands or shallow water. During their breeding season they prefer to nest in large areas of bogs, shallow marshes, or wet meadows.

In North America there are six subspecies of Sandhill Cranes, three of which are migratory. Although Sandhill Cranes/subspecies have made a remarkable comeback since the first European settlers arrived, in some states the population is declining and has become a concern, or are on the threatened or endangered list. The Migratory Bird Treaty Act of 1918 protects the Sandhill Crane and subspecies yet, unless prohibited by regulations, gives each state the authority to legalize hunting with proper permits. Last amended in 1998, the MBTA made it illegal to huntmigratory game birds with the aid of bait.Many states have legalized, or are proposing, the hunting of these beautiful wading birds. The U.S. Fish and Wildlife Service maintains that the Sandhill Crane has reached high enough population numbers that, if hunted,won’t cause a dramatic decrease in the population.

Also of a concern, is the loss of habitat for the Sandhill Crane – bogs, savannah, wetlands, marshes, grasslands, etc. – as well as encroaching human population. If you would like to help restore or conserve their habitat you can make donations to your state’s Endangered Species or Wildlife Diversity funds. In Ohio, our state income tax form has a special checkoff program which allows you to donate a very small amount of your refund to theEndangered Species Special Account.

Sharon has always been artistically expressive from a young age - drawing, painting, piano, violin - growing up with a crayon, pencil, paint brush, or musical instrument at her fingertips. After her childhood and teen years, graphic design and web development filled her need for creativity. Sharon's true passion is now photography. What started out as a hobby on Instagram in late 2011, has evolved into a journey of self-expression using a digital medium. Sharon is self-taught in photography, through trial and error and countless hours of practice and experimenting. She thoroughly enjoys being outdoors to witness and capture the beautiful sights that are everywhere around us. Her photographs have been published locally and are now on display/for sale at local businesses. Sharon was bitten by the travel bug in 2006, and is either traveling or planning her next destination. She enjoys seeing new places and experiencing other cultures. Sharon owes her love of traveling to her parents, who took her on many vacations across the U.S., having been to every state except Hawaii. In recent years she's traveled to Alaska, Washington, New Mexico, Assateague Island, Maine, Nova Scotia, Prince Edward Island, Saguenay Fjord, Quebec, Denmark, Germany, Estonia, Russia, Finland, and Sweden. Sharon will be visiting Namibia, Africa during July/August '13 for a two week volunteer mission and 4-day Safari. Before the Safari, she will be helping to teach the San Bushmen children for one week, then volunteer her time at the wildlife sanctuary during the second week. She belives that giving back to people and wildlife is both rewarding and necessary.