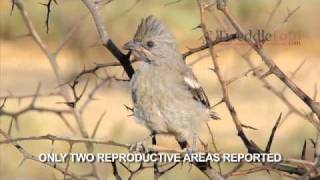 As a nature lover and wildlife photographer it is always a pleasure to be part in research and conservation activities. Here an example of two livelong friends’ researchers, Monica Romo and Mario Rosina and their hours of commitment studying and protecting the endemic Peruvian Plantcutter.

The Peruvian Plantcutter (Phytotoma raimondii), is endemic and restricted to the north coast of Peru in South America, from Piura to south Ancash, from thedesert scrubup to 550m over sea level. Before, very little was known of the natural history of this very endangered specie.

In April 2010two nests ofPhytotoma raimondii, the Peruvian plantcutter, were found in Huarmey. Both nests were in shrubs commonly known as “palo negro” (Grawoskia). One nest had three turquoise eggs and the other two chicks that were approximately two weeks old. Two weeks later, two fledglings were found following presumed parents. They were close to the second nest, which was empty. These were the first nests reported forPhytotoma raimondiisince 1934. After thatfive active and two empty nests as well as fledglings and juveniles have been found between March and June 2011, December 2011 and January2012[M.R.1].

It is estimated that just in the Huarmey area, where this recent research was made, the population might be approximately 80 individuals. The occurrence of good habitat with suitable food and sites for reproduction for the Peruvian Plantcutter in Huarmey is confirmed. The two most important species for food “algarrobo” (Prosopis) and “palo negro” both occur in sufficient amount in this place. Palo negro is also very important for the reproduction since all the nests found to date were in this specie.

Besides Huarmey in Ancash, other six sites have been identified with populations of more than 10 individuals, and only in three of them the specie is known to reproduce. Results indicate that the current total population is less than 500 individuals. These sites consist of flora species typical of the Peruvian desert scrub, several of which are threatened. Sites are very small (between 5 to 150 ha.), highly fragmented and are under immediate threat of destruction due to agricultural and urban expansion, illegal logging, livestock foraging and the introduction of exotic plant species.

The Peruvian Plantcutter is endemic to Peru.

Is one of the most endangered birds.

It´s habitat is being destroyed dramatically.

There are just a few isolated populations in very small areas.

It seems there are less than 500 individuals.

Thanks, Ken, happy to share, and it´s been really nice to be part of this research, and hope it will open eyes for future research in the Peruvian Plantcutter. And good idea to present it for the weekly competition. Best Regards and thanks again.

Thanks Wai Ling Liu, is gratifying your interest in the Peruvian Plantcutter, from Hong Kong. Best Regards!!!

Michael, welcome to our blog – what an outstanding article to start with! The first photo of the Plantcutter would be a winning candidate for the weekly photo competition. Thanks for sharing.