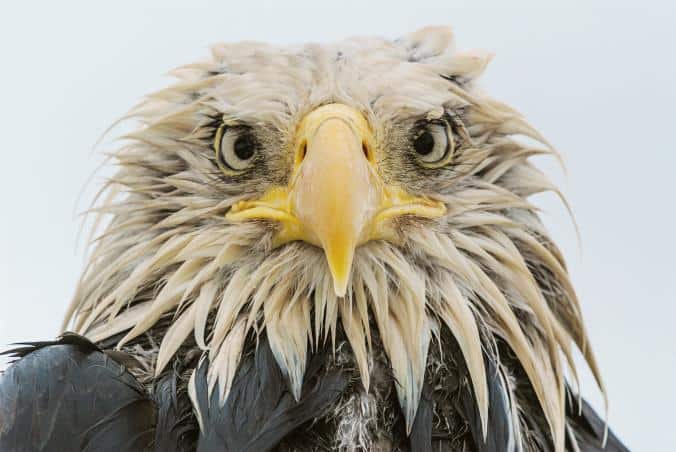 Majestic as they are, bald eagles can lead surprisingly scrappy lives. In addition to aerial battles waged over territory, the birds sometimes wield their sharp talons while tussling over a bite of fish.

The video shows a juvenile eagle with mottled colors swooping into a group of birds and slamming into an adult eagle calmly picking at a fish. The adult, knocked backward in a melee of froth and feathers, is nearly completely submerged—but manages to right itself.

“The talons of the juvenile barely missed the eyes of the adult—no wonder I saw eagles with injured eyes,” says Sasse. These chaotic and fierce interactions can often leave birds with broken beaks and feet, as well as gashes on the face.

“Such a fight takes about a second or less,” and in this case, “both were unharmed and the dispute for food was over quickly.”

A Closer Look at Complete Chaos

In February 2018, Sasse traveled to Dutch Harbor in the hopes of photographing eagles, a thousand of which regularly swarm the fishing village of around 4,500 residents.

“These eagles are larger in size due to cold and harsh weather conditions in the Aleutians and they are quite used to people,” Sasse says. “They will land on your car or right next to you.”

During his visit, Sasse got lucky with the weather in the normally rain-lashed, wind-whipped town, and discovered that he could capture the ideal footage by lying flat on the ground. It was then that he managed to record the messy eagle attack.

Capturing these brief but brutal encounters in slow motion is tricky, and Sasse says that such clips could lend a bit of insight into fluid dynamics, aero-elasticity, and the physics of eagle locomotion.

“It looks like complete chaos in still images or real-time videos,” says Sasse, a physicist by training with a hankering for slow-motion and time-lapse photography.

“Their feathers seem to streamline in an invisible fluid of air, where every feather has a particular purpose, highly complex on a microscopic scale, yet well coordinated as a flight system,” Sasse says.

“The standing and flapping behavior is part of their attempts to look big and hold their ground. Dominance is determined largely by size and hunger level.”

Sasse also speculates the attacking eagle in the video was female. Why? Because it’s a juvenile bird—note the lack of white coloration—and because in eagles, like most other raptors, females are bigger than males.

They’re dominant, battling amongst one another for rank while the smaller males impatiently wait for a chance to sneak in and grab a bite. In other words, it would take an extremely hungry juvenile male to go after an adult.