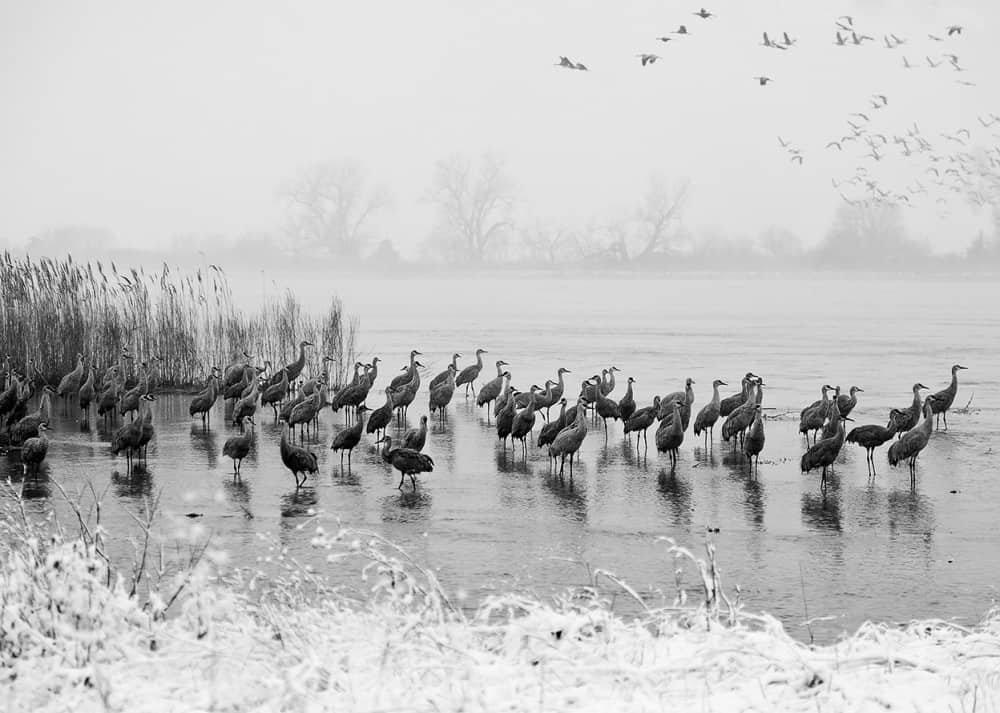 Spring has begun to reveal itself here in Nebraska. However, it can be hard to see and appreciate because snow still covers the ground. Temperatures fall well below freezing each night, sometimes to single digits. The yard has no green, just matted brown turf. Farmer’s fields are weeks away from being tilled and planted.

However, there is one obvious and undeniable sign that spring is about to be sprung; the first sandhill cranes of the year have arrived! Each spring since the Eocene, sandhill cranes have migrated through central Nebraska. Every year 500,000 sandhill cranes, 80 percent of the world’s cranes, congregate along a 60-mile stretch of the Platte River, mostly between Grand Island and Kearney.

This crane assembly along the central flyway in the heart of the Great Plains is a wildlife spectacle of epic proportion. It has been compared to the grand migrations of the wildebeest and the caribou. Sandhill cranes, which wintered in Texas, New Mexico, Arizona, and Chihuahua, Mexico spend two to three weeks along the Platte. They come in several waves. They begin to arrive in late-February and most leave the area by mid-April. They spend their time in Nebraska resting and fattening up before they resume their long journey to Arctic and subarctic nesting grounds.

Crane photography during this time is best done in one of two ways. The first, and the method that best reveals the grand scale of this spectacle is to position yourself right on the river at sunrise and sunset. At sunrise, flocks of up to 50,000 cranes will blast off in a visual and audio explosion that will take your breath away.

Second only to the thrill of the sunrise blast-off is their late afternoon return to the river. About an hour before sunset, after spending their day feeding on waste corn in nearby fields, the first cranes begin to return to the river to roost for the night. At first a few family units begin to circle overhead and eventually settle into the shallows along the river’s edge and sandbars. Soon, more begin to arrive and before you know it, the sky is filled with thousands. As the sun settles below the horizon, the cranes settle in for the night.

Both sunrise and sunset along the river offer tremendous wildlife photography opportunities. Intimate portraits of cranes are difficult during these times but environmental and interactive compositions can be very special. “Gear down” and “dance” shots are what I come here to make.

During the day, the cranes leave the river and break up into smaller flocks to feed on waste corn. Fields within a few miles of the river offer tremendous amounts of this important food source that helps them add up to 20 percent of their body weight. It is this time in the fields when one can get a little closer and get intimate portraits of the birds. This is also the best time to witness their “dance” moves. These moves are used to call attention to and convey their interest toward a family member or possible mate. Their dance includes curtsies, jumps, and spread wings. They also include playful tossing of sticks and corncobs into the air.

Cranes are hunted in every state along their flyway except Nebraska. Consequently, they can be very skittish making it difficult to get close. The best method I have found to photograph their cornfield feeding and dancing is from a vehicle. Cranes are not disturbed by the presence of vehicles. In fact, it is not uncommon to see them within a few yards of Interstate 80 as traffic screams by at 75 miles per hour. However, opening a door of a stopped vehicle will send them running or flying away. This is bad for two reasons. First you don’t get the shot, but more importantly you disturb their feeding and resting time, which is desperately important in order for them to survive the migration.

In between sunrise and sunset, during the day, I like to roam the gravel back roads and shoot from the open window of my truck. I typically shoot 400mm or 600mm (sometimes with a 1.4x TC) handheld with support of some kind of bean bag or pad balanced on the car door. I’ve used a variety of supports but my favorite is the Puffin Pad. It fits securely on a partially open window and can stay in place at speeds up to around 40 mph.

Reports from the field indicate the crane numbers are beginning to get large. I’ll be heading out that way next week and at the end of the month for my annual Nebraska Bird Workshopwhere we will not only shoot sandhill cranes, but also greater prairie chickens and sharp-tailed grouse. I’ve been shooting these interesting creatures for over twenty years but it never gets old. There is something intriguing about sandhill cranes. They haven’t changed much in 10,000 years and their spring return each year is somewhat reassuring in this fast paced, ever changing world in which we live.