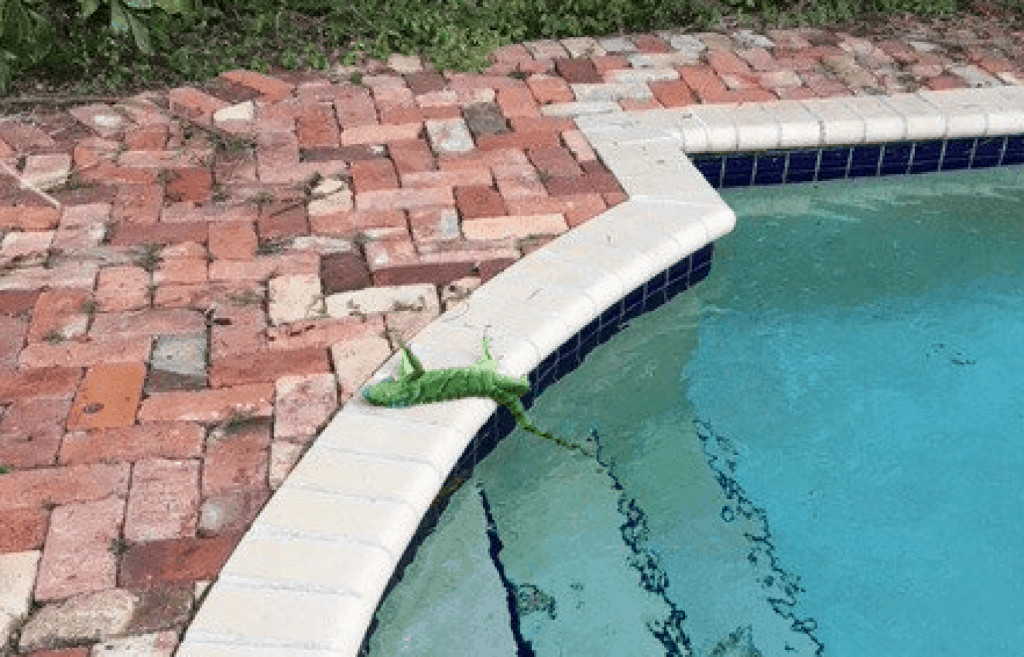 While much of the northern part of the U.S. copes with blizzard conditions, in Florida, it’s raining iguanas.

Florida residents have been sharing pictures of the reptiles belly up in backyards and on the side of roads.

The effect is brought on by the abnormally cold weather hitting the East Coast of the United States. And green iguanas, an invasive species accustomed to warm tropical climates, are struggling to cope.

Not all of the state’s iguanas seen lying on the ground are dead. Many, in fact, are frozen in limbo, and some have been seen snapping back to life once their bodies warm. When temperatures drop below about 50 to 40 degrees Fahrenheit, their blood starts to slow and they enter a lethargic state akin to a deep sleep. Note, this makes iguanas dangerous for people to pick up as they can become defensive once they’re able to move.

The reason these iguanas have such a hard time coping with cold weather is simply that their reptile bodies aren’t adapted to it.

Florida is home to a wide number of invasive species from monkeys to pythons, and iguanas are one of many species that has taken hold.

Their native habitat range stretches from southern Mexico to the Brazilian rainforest, where they spend most of their time perched in tree canopies. It wasn’t until the 1960s that these large lizards, some of which can grow to be six feet long, were brought to Florida. Since then, their populations have exploded.

How Cold Affects the Animals

Part of the reason iguanas have survived so well in Florida is thanks to the state’s typically sunny, humid weather—but when cold strikes, iguanas fall.

“As soon as the temperature drops their metabolic rates drop,” says Coleman Sheehy, a herpetologist at the University of Florida’s Florida Museum of Natural History. He explains that because iguanas are ectothermic, meaning their body temperature depends on outside temperatures, the blood in their bodies cools down significantly in cold weather.

If they’re exposed to cold weather for long enough, a day or two depending on the iguana’s size and age, they’ll eventually die.

Native reptiles, however, have little to fear. Reptiles and amphibians in regions that experience cold weather have both physiological and behavioral adaptations to cope with cold weather.

One extreme example of this are wood frogs that live in Alaska. During the coldest months of the year, the liquid around their cells forms ice crystals, freezing 60 percent of their body. A 2014 study found their glucose levels spike and their hearts stop during this period, but come spring, they thaw out and hop away.

Native Floridian reptiles have a number of behavioral adaptations to cope with cold weather.

“When cold temperatures approach, they know to hide below ground,” says Sheehy.

Killing Off the Invaders?

While these cold weather snaps can make it look like iguanas and other invasive species are undergoing a massive die-off, it’s unlikely their populations will be harmed long term. Some may even learn to adapt to it.

After Florida experienced a particularly cold bout of weather in 2010, Burmese python populations appeared to drop, but a 2012 U.S. Fish and Wildlife study found they easily, and quickly, bounced back.

Sheehy expects the same will be true for iguanas.

“These populations could adapt over time. They could become more cold tolerant and expand their range,” he says of Florida’s invasive species. “It still remains to be seen.”

This article was first published by National Geographic on 05 Jan 2018.