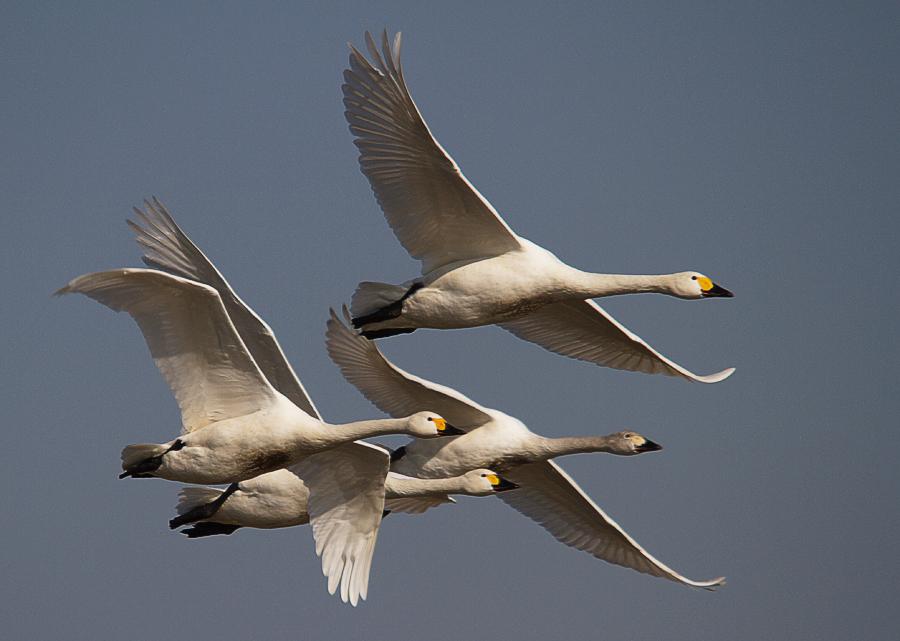 The conservationist and “human swan” Sacha Dench has become the first woman to cross the English Channel in a motorised paraglider during her epic 4,500-mile journey following migrating birds from the Russian tundra to Britain.

The 41-year-old made history crossing the Channel on her paramotor after an eventful 10-week flight accompanying the annual migration of Bewick swans to better understand the reasons for their declining numbers.

Travelling at just 35mph – struggling to keep up with the birds – Dench flew in a v-formation with geese over Russia, debated shooting swans with hunters in Poland, and also dislocated her knee, which forced her support team to fit wheels to her fragile craft for takeoff and landing.

“The whole way I’ve been trying to put myself in the head of a swan. There are times when I wish I was a swan. It would’ve been so much easier,” said Dench, who works for the Wildfowl & Wetlands Trust (WWT).

“When the temperatures got really cold I’ve wished I could flap my arms and generate some heat but that makes the whole paramotor shake. There have been plenty of scary moments but I don’t feel like it is a dangerous machine anymore.”

With her swan’s-eye view of the world, Dench said she particularly appreciated crossing the Taiga forest of Russia and seeing no trace of human habitation, and witnessing the scale of the tundra. “The colours of the tundra are the most beautiful I’ve ever seen in a landscape. They look like they could be from Mars,” she said.

When she reached villages and towns, she met Russian schoolchildren who were sent out to shoot migrating birds for food at a young age. They were “riveted by how conservation and research works. They had no idea where the swans went”.

Later, she flew over countryside where children were shooting after school. “They put down their guns and waved enthusiastically at us. If one of the aims was to inspire the next generation to see birds differently then we must be having some sort of impact.”

In 1995, there were around 29,000 Bewicks in Europe; by 2010, the figure had dropped to 18,100 and the numbers have continued to decline. Shooting is one reason – about a quarter of the Bewick swans x-rayed at the WWT’s Slimbridge reserve in western England, have shot in them – but Dench also pointed to the loss of wetland habitat where they can rest or feed on their migration.

Although she took care to avoid disturbing the migrating birds there were moments when they joined her. When she flew up to 2,800ft, above the clouds, the sky was filled with geese. “You really felt in the thick of migration,” she said. On another occasion, two white-fronted geese veered towards her. “I was just about to turn away thinking there would be a collision but then they flew alongside my wingtips in a V-formation. That was very special,” she said.

On another occasion she ended up flying 50 metres below a migrating flock of Bewicks. “They drew alongside for a few minutes and that was lovely to see. I didn’t look like a threat to them, I was just a big flying thing and they completely ignored me,” she said.

Low points included being sent to a Russian hospital for an MRI scan on her dislocated knee and also losing track of one of the satellite-tagged swans she was following. The bird disappeared during foul weather in Estonia and Dench realised it had perished. “You get quite attached to them as individuals,” she said.

Although flying low over the Taiga forest was particularly hazardous with its lack of safe landing spots, crossing the Channel was Dench’s toughest challenge yet. “When I crossed from Belgium into France and first saw the white cliffs of Dover I started to cry,” she said. “I’m not much of a softy but I thought, actually, I am keen to be home. It is a bigger moment than I’ve let myself believe.”

The next leg of Dench’s journey is up the Thames to Downing Street, where she will present a WWT petition on Tuesday calling on the government to take action to restore wetlands, ensure the safe positioning of wind turbines and power cables, and tackle illegal hunting.

Swans may be welcomed as a royal bird on the Thames but Dench is not: the Civil Aviation Authority has refused to grant her permission to fly her paramotor above the Thames and over London.

This article was first published by The Guardian on 05 Dec 2016.

Give Bewick’s swans and other wetland species the best possible chance of survival by making a donation.

Thanks for your kind comments, Stuart. It’s always good to get feedback and especially when it’s positive feedback!

“Making a donation to WWT is best chance of Bewick swan survival,” whose numbers have declined by 10,000 in last 15 years? Unfortunately illegal hunting will never end as long as legal hunting exists & natural habitat continues to be eroded by human development. Donations notwithstanding.

Direct shooting is undoubtedly a problem. But so too is lead shot ingestion, which WWT. is very non-committal about, and too there’s the huge problem of wind-turbines they’re having to both migrate through as well as their stay here in the UK. throughout the winter, where they continue to be killed by them.