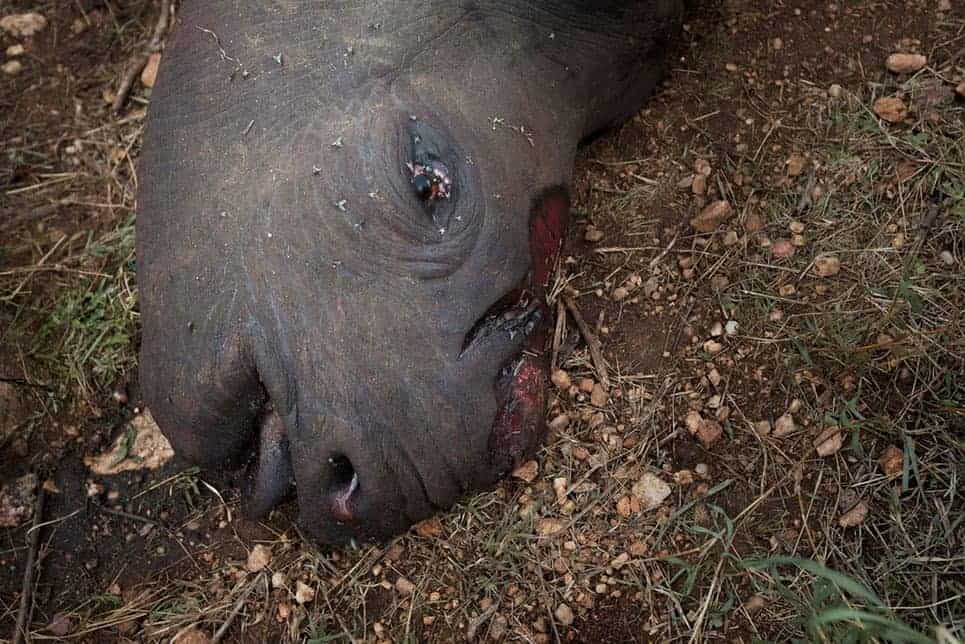 On the black market it is reputedly worth more than its weight in gold or cocaine, and this week the lure of rhino horn brought the bloody business of poaching to a zoo near Paris. There, in the dead of night, criminals broke in, shot a white rhino called Vince three times in the head and then hacked off its eight-inch horn with a chainsaw.

The attack marks a shocking new development in a crisis that sees more than three rhinos killed every day in their southern African homelands. Trade in rhino horn is completely illegal but demand from Vietnam and China fuels poaching and smuggling, putting the rhinos at risk of extinction.

Rhino horn is made of keratin – the same material as human fingernails – but an urban myth about a senior Vietnamese figure being cured of cancer pushed up demand in recent years and as its price rose, it has become a status symbol and hangover tonic. Longer-standing uses such as a supposed fever treatment in traditional Chinese medicine and as ornamental carvings have also driven up prices.

With the prices high and, until recently, the penalties very low, international organised crime networks mobilised to supply the illegal trade – wildlife trafficking is a multi-billion dollar enterprise only surpassed by the smuggling of drugs, arms and people.

The zoo raid, and thefts from museums across Europe in recent years, reveal how the criminals have been keeping ahead of authorities. “The criminal networks involved have shown themselves to be far more innovative and utterly ruthless,” said Julian Rademeyer, an expert on rhino horn at Traffic, the leading wildlife trade monitoring organisation. “They are often outthinking law enforcement and government regulations, finding new loopholes to exploit.”

The criminals have even shown a brazen marketing flair: the idea that powdered rhino horn is an aphrodisiac began as a western myth, said Rademeyer, but the syndicates latched on to it and now sell wine laced with rhino horn as aphrodisiacs in Vietnam.

Rademeyer and all the key wildlife trade groups decline to detail the current price of rhino horn, for fear of encouraging more crime. But it is public knowledge that the horn peaked in price at about $65,000 a kilogram in 2012. It is thought to have fallen significantly since then, though it remains many times more valuable than elephant ivory.

There has been a crackdown on poaching in South Africa, home to about 70% of all rhinos, but killings have spiked in Namibia and Zimbabwe as poachers seek easier targets.

“There have been warnings for the last four to five years that zoos need to tighten up security,” Rademeyer said. Police are visiting every zoo and wildlife park in the UK that houses rhinos – 111 in total – to provide security advice.

Rademeyer said there have been hundreds of rhino horn thefts across Europe in recent years. In 2016, seven men received lengthy jail sentences in the UK over a series of museum raids which targeted horns and jade artefacts estimated to be worth over £50m.

However, the epicentre of the rhino crisis remains in southern Africa, where poor young men are willing to risk their lives by poaching. They receive just a tiny fraction of the horns’ ultimate value, but even a few hundred dollars is a huge sum in their communities.

Hundreds of poachers have been killed in the last seven years and a much smaller but significant number of rangers, soldiers and policemen have also died. “People have limited sympathy for poachers but I think [their poverty] is a reality that has to be grappled with,” said Rademeyer.

“Shooting and jailing the poachers is not a long term solution,” he said. “They are very easy [for the crime syndicates] to find and very easy to exploit. Whether they get killed or arrested means very little to the syndicates, and the same applies to the couriers. The kingpins who are making the big money are getting away with it.”

Rademeyer said police cooperation is crucial to tackling the global rhino horn trade: “You are dealing with very sophisticated transnational organised crime syndicates in many cases and yet your law enforcement is hampered by international borders. Police tend to police their own backyard.” He says campaigns in Asia to stigmatise rhino horn use are important too, and have helped cut the shark fin trade.

The Paris poaching also raises the controversial question of whether a legalised trade in rhino horn, harvested sustainably from wild or farmed animals, could destroy the black market. Many nations and organisations strongly oppose the idea, saying it would simply allow illegal horns to be laundered with fake permits, but South Africa backs the idea.

Duan Biggs, a researcher at Griffith University in Australia, said: “The issue is complex, but a well managed and enforced legal trade that is structured to fund rhino protection and deliver community benefits is likely to work better than the status quo.” He accepts some people might find it unethical, but said: “I think that poaching a rhino in a zoo or in the wild is even more morally repugnant than a well regulated legal trade.”

However, a legalised rhino horn trade is unlikely any time soon. Swaziland made such a proposal at an international wildlife trade summit in Johannesburg in September and it was soundly defeated.

Rademeyer remains cautiously optimistic that the perilous decline of the world’s rhino can be reversed, pointing to their comeback from the brink of extinction in the 1950s. “We have beaten this before,” he said.

This article was first published by The Guardian on 10 Mar 2017.

The death penalty is required for all animal abusers/murderers!

I agree with Mark, more punishment for those who kill these beautiful animals and the gov’ts that allow this to happen. It is greed for the all mighty dollar.

It’s not as if Asian nation are unaware of the plight these animals face. It has been well covered and reported for years. Yet, they are determined to see rhinos and elphants go extinct. They just don’t care and have no real shame.

Matthew Markus of Pembient is looking to curb the illegal hunting of Rhinos
through the creation of artificial rhino horns in their lab. The object, as well as
making some money in the process I’d imagine, and very rightly so, is to cause
the price to crash on the world-market thus making Rhino poaching less
attractive. We ourselves certainly wish him well with this and hope to report
any progress in the future.

I think it’s time to bring the death penalty into wildlife conservancy. No more mister “nice-guy”. Poach an endangered species, you DIE. No appeals. No probation. Just a bullet between the eyes. And, as I have long advocated, the DNA of these poor poached animals needs to be preserved for a future where species restoration can put that to good use.

So you keep saying, and perhaps one day it might occur to you that by keeping publicising the value you are continually increasing the bloody problem!!!!