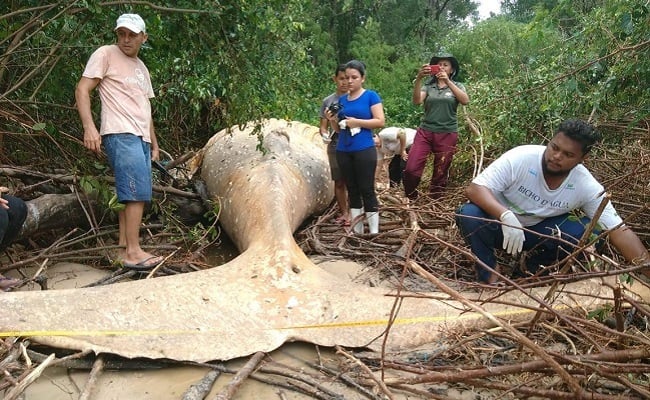 When they followed vultures into the rainforest on Marajó Island in Brazil, near the mouth of the Amazon River officials with the state health, sanitation and environment department made a surprising discovery. The birds were feeding on the carcass of a 10-ton, 26-foot-long humpback whale calf.

The calf, about a year old, was in an area so remote that it took officials two trips to get there.How did it end up in the rainforest, about 50 feet from the river?

Wildlife experts, including those with the nonprofit conservation group Bicho D’agua Institute, believe the calf probably died after becoming separated from its mother and that turbulent waves during a storm swept it inland.

“During this season, the tide normally rises twice a day to almost 4 meters (13 feet) and floods the mangrove forest, bringing lots of trash, including trash from ships from a lot of places in the world,” Maura Sousa, an oceanographer with Bicho D’agua, told CNN. “This explains why an inflated carcass, due to the gases of the decomposition, was dragged into the mangrove forest.”

The bigger question is: what was the humpback calf in that area of Brazil in the first place?

This is “unusual,” biologist Renata Emin, project leader for Bicho D’agua, told the Brazilian news site O Liberal. From August to November, humpback whales can be found thousands of miles south, along Brazil’s Bahia coast, where they mate before migrating north. By February, they should be in Antarctica.

Due to decomposition, any clear indications as to how the calf died may have been lost. “We are collecting as much information as we can get, and identifying marks and wounds on its body to see if it was caught in a net or hit by a boat,” Emin told O Liberal.

Another possibility, proposed by the Maritime Herald, is that the young calf may have died after mistaking plastic debris for food and eating it.

From five to 13 million tons of plastic leak into the world’s oceans each year, according to Whale and Dolphin Conservation. In November 2018, over 1,000 pieces of plastic, including bags, bottles, flip-flops and cups, were found in the stomach of a dead sperm whale that washed ashore in Indonesia. More than 74,000 people have signed a Care2 petition urging Indonesia to ban single-use plastics.

As bizarre as it may seem, this poor humpback calf wasn’t the first whale to end up in the Amazon rainforest. In 2007 a 12-ton minke whale managed to travel 1,000 miles from the Atlantic Ocean via Amazon River tributaries. Scientists and volunteers rescued the lost whale, which was stranded on a beach. The plan was to transport the whale by ship back to its ocean home, but sadly it died before that could be accomplished.

We don’t know what killed this lost humpback whale, but we do know that single-use plastic is responsible for the death of hundreds of whales every year. Join over 74,000 supporters and sign and share this Care2 petition demanding that Indonesia ban single-use plastics.