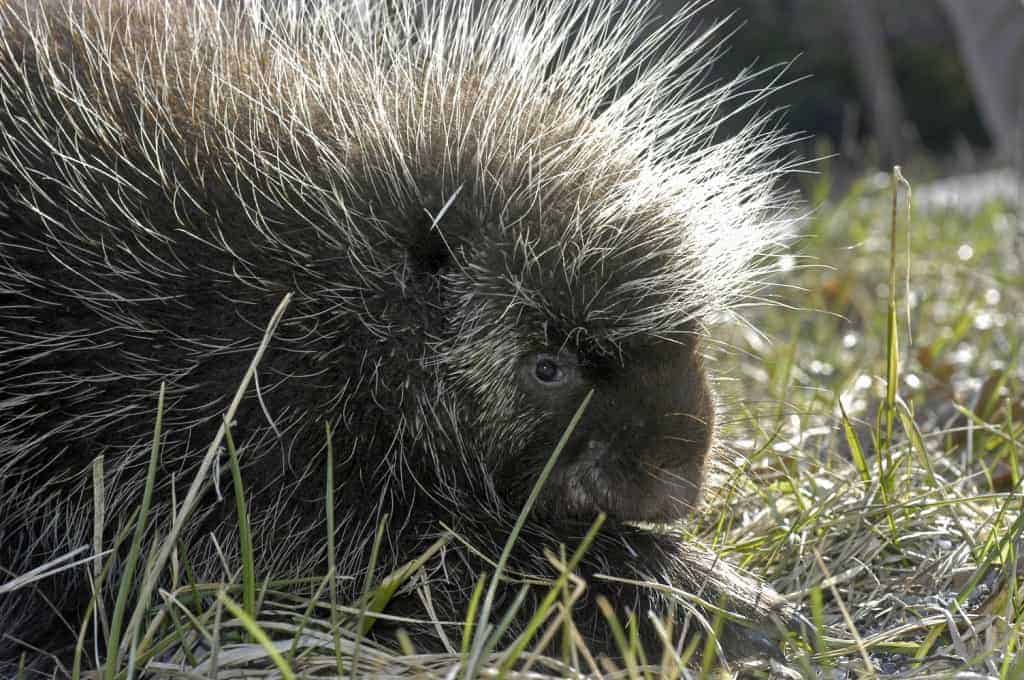 When the going gets tough, the prickly get going—especially in the case of a plucky porcupine that recently fended off 17 lions in South Africa’s Londolozi Game Reserve.

In late October, wildlife guide Lucien Beaumont came across the pride of big cats, including some youngsters, milling around an object of interest.

“To my surprise, it was a rather unfortunate porcupine surrounded by 13 lion[esses] and four male lions. This is not an ideal place to be, especially if you feature on the menu of a lion!” he wrote on his blog. (Also see “Mongoose Fends Off Lions: Explaining Viral Video.”)

Beaumont began filming the encounter between the predators and prey, one “I have been hoping, dreaming and imagining for many years,” Beaumont wrote.

Despite being heavily outnumbered, the fearless rodent more than holds its own, flaring its quills and moving aggressively toward the lions, who eventually seem to decide that their curiosity isn’t worth getting skewered. (Are you a fan of big cats? Participate in National Geographic’s upcoming Google+ Hangout for Big Cat Week on December 3 at 1 p.m. ET.)

National Geographic spoke with Kristina Smith, a keeper at the Oregon Zoo’s Africa Area, who said the species in the video is likely an African crested porcupine, a few of which live at the zoo.

What do you make of the porcupine’s behavior?

When they’re threatened, they’ll shake this little rattle. They have this little section of [hollow] quills at the bottom [that make noise]. And they’ll stomp and grunt. [An African crested porcupine will] use all those defenses: the stomping, the rattling, and the shaking of the quills. It’s just an extra way to alert [their enemies], so they use the rattle kind of like a snake would.

Do you think this encounter with lions is an unusual occurrence? I can’t imagine porcupines are high on any predator’s list of favorite foods.

It’s pretty common that lions will come across a porcupine and it will defend itself like that. They might eat one from time to time, but it’s not their main preferred item or something that they want to spend time on. (Also see “‘Unusual’ Pictures: Lions vs. Hippo.”)

They really don’t have that many predators because those quills are pretty effective.

In your experience, what are porcupines like, temperamentally speaking?

Generally they have pretty good temperaments. In captivity they just eat roots and tubers and fruits and vegetables. A lot of zoos use them as education animals.

When they’re on the defensive, it’s a different story.

When they’re relaxed the quills are all down, but when the threat is around for a long time [as in the video], they’ll just keep the quills up until they feel safe again and then they’ll lower them.

No porcupine can shoot its quills—it’s just a common misconception. They just charge backwards, and the quills will [stick into] whatever they’re charging into.

They come out [of the porcupine] easily once they’re stuck into anything else, kind of like a cactus.

What do you make of the lions’ reactions here?

It seems they’re just passing by. It doesn’t look like they’re really interested in eating the porcupine. They kind of knew to stay away from it. I’m surprised the juveniles weren’t more interested.

Indeed, Beaumont wrote on his blog that the lionesses first lost interest and began to move off, followed by the young lions—”leaving the porcupine to disappear into the night and live to see another day.”

This article was first published by National Geographic on 06 November 2014.

Hystrix galeata is a wonderful animal! Did anyone else note the porky quill hanging from the chest of the young lion in the last few frames? Porky 1 Lions 0.

What a brave little character using all his natural defences. Interesting thank you.

I've only had one occasion in my life to see a Porcupine in the wild, back in 1973 in the Rocky Mountains west of Denver, Colorado. He seemed quite docile. I wanted to personally understand his defensive strategies, so I took a small branch and brought it close to him. He immediately turned his back to it and at the first opportunity buried his face in the overhang of a fallen tree. Any time I tickled the spines on his back, he lunged backward then immediately resumed the face-buried posture. To my amazement, some of those quills stuck into the… Read more »