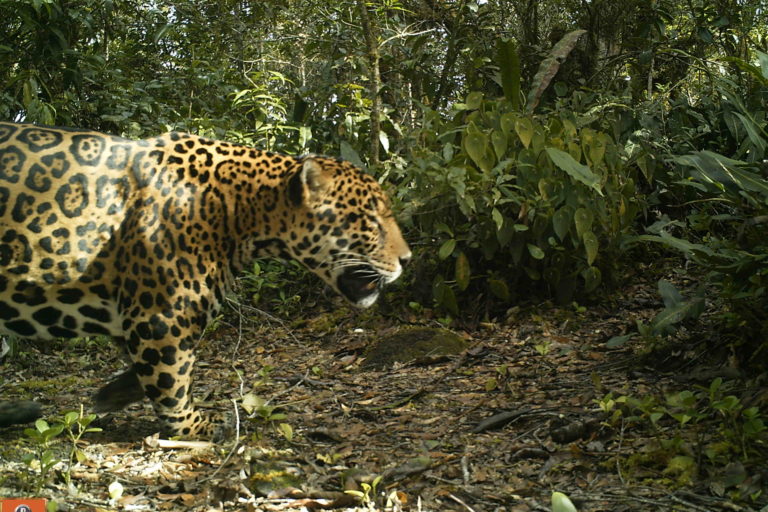 Fires had a devastating effect in the Sierra Nevada de Santa Marta, in Colombia’s Caribbean region, between 2012 and 2013.

In 2013 alone, the region lost an estimated that 22,000 hectares (54,400 acres) of forest, mainly due to fires, according to CORPAMAG, the environmental authority for the department of Magdalena.

At almost the same time, CORPAMAG began to notice an increase in reports of livestock such as cattle, donkeys, mules and lambs being killed.

According to small farmers in the area, jaguars were responsible for these attacks, and people began hunting down the big cats to safeguard their livelihoods.

This conflict pitted the near-threatened jaguar (Panthera onca) against impoverished farmers whose entire livelihoods depended on no more than two head of cattle each.

In addition to this, the Sierra Nevada de Santa Marta is a unique ecosystem, full of endemic species and also the northernmost territory of jaguars in South America.

The challenge that arose was how to guarantee the conservation of the great carnivore, and the economic stability of hundreds of people.

In 2017, José Fernando González-Maya, director of Colombia’s Water and Land Conservation Project (ProCAT), together with several researchers from the Institute of Ecology at the National Autonomous University of Mexico, published a large study in the journal Oryx that painted a mixed picture for the prospects of the jaguar throughout South America.

Accounting for all of the variables, the researchers concluded that of the 34 known jaguar populations on the continent, 25 should be considered critically endangered and eight endangered. They determined only the Amazon Rainforest population could be categorized as being of least concern. They also found that 55% of the species’ territory has been lost over the past century.

“The population of the Sierra is the most threatened in Colombia, categorized as critically endangered, and is relatively isolated with limited movement toward the Perijá area, so it required very specific actions,” González-Maya told Mongabay Latam. “In general, all the cats in the Caribbean region depend to a great extent on the good state of conservation of the Sierra Nevada de Santa Marta.”

Given the perilous state of the jaguars in this region, CORPAMAG was particularly concerned about farmers killing the animals. So the environmental authority, working with ProCAT, began to look into the causes for the human-jaguar conflict. They discovered that the jaguar population had been concentrated mainly in the Sierra coffee belt, that its territory had shrunk, and its usual prey had diminished, forcing the jaguars to resort to hunting livestock.

“We started receiving calls from the coffee-growing areas and that did seem very strange to us,” says Diego Zárrate, a scientific coordinator with ProCAT who studied jaguars for his doctoral degree. “On the one hand, people were hunting a lot, the coffee growers there live in difficult conditions and provide part of their nutritional needs through bushmeat; there were also very large fires in the high areas of Sierra Nevada de Santa Marta National Natural Park that caused disturbances, which resulted in the jaguars being concentrated in the coffee belt which is a buffer zone in the Sierra: an area between 800 and 1,200 meters high [2,600 and 3,900 feet] that still has forest.”

According to Zárrate, the species is doing very well in Sierra Nevada de Santa Marta National Natural Park and in the Indigenous reserves, where the feline is culturally revered. Ecotourism and civil society reserves have sprung up in the area that borders Tayrona National Natural Park, which has pushed the jaguars out in search of more suitable areas. As a result, the big cats have been seen less than 1 kilometer (0.6 miles) from Santa Marta Airport, very close to the sea.

Zárrate says other complications abound: the corridor to the Sierra de Perijá area is a major mining site, and the region that connects the Sierra Nevada to the Ciénaga Grande, which was originally jaguar habitat, is now dominated by oil palm and banana farms.

“Although the feline could use these monocultures because it could find some animals to hunt, it is not its habitat and so it does face many problems,” Zárrate says, adding there are also areas where tourism is displacing small farmers, who sell their land and move higher up the mountains, where they clear forest and graze their cattle. “The problem is when there are thousands of farmers in the same situation, a lot of forest is lost, and in those areas the position of the jaguar is very difficult,” Zárrate says.

Faced with this scenario, ProCAT and CORPAMAG began an environmental education campaign, training residents on how to keep their livestock safe and how to respond if they come face-to-face with a jaguar.

Helping farmers protect their animals was only part of the work needed in Sierra Nevada de Santa Marta.

In a 2018 study published in the journal Biodiversity and Conservation, Zárrate and González-Maya, along with two other researchers from the University of Oregon, identified conservation and management areas based on jaguars in Sierra Nevada de Santa Marta and the relationship between three spatial criteria: patches of suitable habitat; habitat connectivity; and areas where there is likely to be conflict between humans and jaguars. The results showed that community conservation strategies were needed, given that most of the proposed conservation areas were located on private rather than public land.

A year earlier, CORPAMAG had made some progress with the publication of its Management Plan for the Magdalena Felines, a policy instrument for the conservation of the department’s wild cats, with heavy emphasis on jaguars. A further breakthrough came in 2018, when the mayor’s office of Santa Marta included the priority areas for jaguars in its zoning plan (POT).

“They defined all the necessary ecological restoration zones which matched the most important zones for the jaguar,” says González-Maya. A total of 93,508 hectares (231,063 acres), approximately 39% of the municipality’s area, were prioritized for conservation and restoration activities. This was the first such initiative in Colombia — and one of the first on the continent — to incorporate the conservation of a species into a specific zoning initiative, González-Maya said.

CORPAMAG used its feline management plan and everything learned about jaguars in the region since 2013 to advise on the environmental part of the POT. “The corporation prioritized the jaguar as a flagship and umbrella species to achieve results that would protect a greater number of species,” says Julieth Prieto, biodiversity and ecosystems coordinator at CORPAMAG. “The jaguar is also a focal species through which it it is possible to organize the territory, because it covers an extensive area of land.”

This is a significant achievement because it makes it easier for CORPAMAG to craft policy for conservation and restoration knowing there is already a road map that shows how it can be done. The environmental authority is also working in consultation with residents of the region to create protected areas for civil society.

Community participation is a core part of the conservation strategy, and involves mainly the coffee growers, whose farms, according to studies, are largely in areas of special interest for jaguar conservation.

This is how the idea was born for the Jaguar Friendly seal, a certification of cultivation that also contributes to the conservation of the jaguar. The certification requires modifications to the management of the land so that it can provide habitat for the jaguar and its prey. For example, different species of shade trees are incorporated.

“When you see one of these coffee plantations at an advanced stage, it is difficult to differentiate it from the forest,” González-Maya says. “We have verified that the prey and the jaguar have begun to move through the coffee plantations.”

So far, seven farms have obtained this seal, and they export their coffee to countries like Romania. The program has also convinced large companies like Juan Valdez to buy a big consignment of a limited-edition coffee known as The Way of the Jaguar. These farms are in priority areas for jaguar conservation that were included within the Santa Marta POT, and for each hectare of coffee that is certified, they must allocate at least one hectare of protected forest.

In this way, habitat for the big cat is guaranteed, and the coffee plantations serve as corridors that allow the jaguar to move between patches of forest that were previously disconnected. Zárrate says there are already more than 280 hectares (690 acres) of forest protected by the Jaguar Friendly label, and this year they hope to increase the number of certified farms to 20.

María Cristina Rodríguez is the owner of one of the certified farms. She says she has owned the land since 1985 and has always kept part of it untouched because she is convinced of the importance of conservation. She says she’s excited about the Jaguar Friendly seal because, in addition to being able to charge a premium for her coffee, there’s the satisfaction of knowing she is contributing to the protection of the big cat.

“The issue of the pandemic has been challenging in many places,” Rodríguez says. “However, our harvest this year was a success, we will be finishing it in February or early March and we have already had the opportunity to sell virtually all of it. In all the time that we have been doing conservation work, the government has never given us any benefit for doing so.”

What’s more, the coffee growers benefit from a “fair trade” price since there are no middlemen, and negotiations are carried out directly with the end customers. “Money also comes from these sources to reinvest in jaguar monitoring, so that conservation is maintained over time, and to incorporate new farms,” González-Maya says.

Through camera traps, the researchers ensure that hunters don’t encroach into jaguar habitat. And as the coffee plantations have adjusted to the new conditions, the frequency with which animals — jaguars and their prey — are appearing on camera is increasing.

“It is a good, high-quality product and it has an added value that we can display with pride,” Rodríguez says. “It benefits us and nature.”

This article by Antonio José Paz Cardona was first published on Mongabay.com on 20 May 2021. Lead Image: A jaguar captured on a camera trap, courtesy of ProCAT.