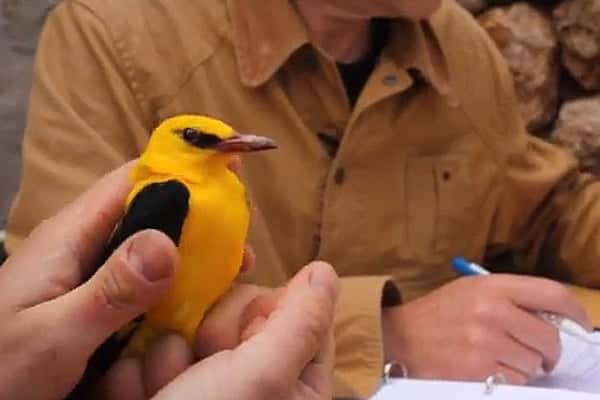 Chris Packham takes a trip to the island of Camino, Malta to see the conservation work done by the BirdLife Malta Ringing Station. Birds just ringed and ready for release include Golden Oriole, Hoopoe and Nightjar. Chris sadly recalls that during the week his hands have been covered in the blood of illegally shot birds seen including Turtle Dove, Swift, Little Bittern, Yellow-legged Gull and Montagu’s Harrier.

Whilst some of the Maltese Police are polite and amenable, others clearly have affiliations with the hunting fraternity. BirdLife Malta’s Press Officer Rupert Masefield was arrested but the illegal hunter filmed on camera with good evidence is still at large. Chris is asked to visit the Police Headquarters for searching, questioning and to make a voluntary statement. Apparently the FKNK, the hunting lobby, have accused him of defamation of their members and transgression of data protection.

Chris and Axel Hirschfeld of CABS, the Committee Against Bird Slaughter, together with the police visit a field in the woods where a mist net with dead birds have been discovered. Apparently trapping of migrating birds is also prevalent on Malta. The police confiscate the net and will investigate further.

There are many conservationists actively opposing spring hunting. e.g. Joe Sultano who has been campaigning since 1962, Raymond Vella who has been shot twice and had his farm burned down and his nature reserve vandalized.

Boycotting Malta will not hurt the hunters but will disadvantage the vast majority of the warm, friendly Maltese people, who are against hunting.

Hopefully the referendum will go ahead early next year and lead to a complete ban of Spring Hunting on the beautiful island of Malta.

If you haven’t already voted, then we invite you to vote FOR or AGAINST a complete ban on the spring hunting of migrating birds on Malta. Please vote and also leave your comments at the bottom of this page.

Information about the project and a template letter to send to your MEP can be found at:

More information and comments from hunters and conservationists:

POLL: Should spring hunting on Malta be stopped?