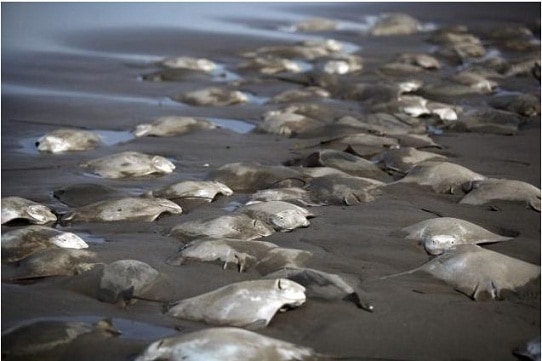 The news is buzzing with stories about more than 250 stingrays that have stranded on beaches in the Mexican state of Veracruz three days ago. Mass strandings of any animal are analyzed carefully to determine if the strandings are indicators of environmental health.

However, in the case of the stingrays, foul play is suspected by locals. There are reports that fishermen dumped these rays on the beach when emptying their nets. The local mayor has made a statement that it is “possible the rays got caught in the nets” of fishermen, who were possibly targeting other fish species.

These rays getting caught in fishermen’s nets is indicative of a much larger, global issue that Oceana strives to address – bycatch. The capture of any non-target marine animal is considered bycatch. This is a large problem all over the world, with fishermen discarding as much as 40% of what they catch, amounting to tens of billions of pounds each year. Not only are fish at risk, but protected species such as turtles, sharks, and marine mammals are captured and killed by the thousands.

Stingray fins are commonly consumed in Mexico and there is a dedicated ray fishery to satisfy this demand. This means that the fishermen who discarded these rays are literally tossing out the income and catch of fellow fishermen. Oceana continues to work diligently to promote responsible fishing to limit bycatch and its inherent wastefulness in many fisheries.

This article was written by Sara Young for Oceana.org