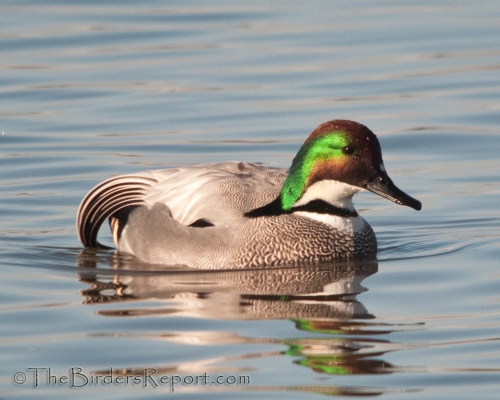 At the end of each year I like to go back and look at the bird photographs I have taken and choose the ones I like the best for a “favorite bird photo” post.

I usually choose one photo for each month but this year I have thrown in some extras, probably, for one reason or another, I couldn’t decide on just one for that month.

Click on photos for full sized images and click on the name of the bird for a link to my post on that species. Most of the posts also include videos.

2012 started out with a bang as a Falcated Duck (Anas falcada) was spotted at Colusa National Wildlife Refuge. Literally thousands of people traveled to the refuge to view this bird during the weeks it was visiting us from Asia.

If you click on the link to this post you will also see a video I shot of the Falcated Duck. The photo above was taken on January 13th with my digiscoping setup at 1/640 sec, f/2.2, ISO 1600.

On February 4th I had a photo blind reserved at Delevan National Wildlife Refuge where I received a visit from a Peregrine Falcon (Falcon peregrinus). Seeing one of these magnificent raptors always gets me excited but when I can get this close and get photos too, well, that’s just icing on the cake. This portrait was also digiscoped at 1/640 sec, f/2.2, ISO 1600.

Another photo adventure, this time from a photography blind at the Sacramento National Wildlife Refuge on March 4th, showed me some excellent views of the Black-necked Stilt (Himantopus mexicanus). I had rented a Nikon AF-S Nikkor 200-400mm f/4G ED VR II lens and a 1.7 teleconverter for the week to see if I liked it enough to put out the rather large sum of money to own one myself. I thought the results were convincing enough that now, nine months later, I finally have one.

I had a tough time choosing between a full frame shot of the stilt or an action shot so I’m putting in both. The first photo is of a female Black-necked Stilt foraging, shot at 1/1600 sec, f/6.7, ISO 400.

On April 23rd I had one of the most beautiful experiences of my life, watching as a Great Horned Owl (Bubo virginianus) fed her three young owlets. This was a local owl nesting in a large oak tree about twenty minutes from my house.

Because it was so early in the morning, I had to use an extreme ISO setting just to get a decent photo early in this photo session, which lasted for nearly two hours. This is one of the early images taken at 1/200 sec, f/5.6, ISO 3200.

The cavity nesting season begins earnestly in May and this year I was lucky enough to find an Ash-throated Flycatcher (Myiarchus cinerascens) building a nest in a natural cavity on May 14th. This is a shot of the female stopping to look out the entrance before taking off to find more nesting material. Digiscoped at 1/320 sec, f/2.0, ISO 3200.

I spend a lot of time in May, June and July monitoring nest boxes. On June 24th I was checking nests at Lema Ranch when I heard the rattling commotion of aBelted Kingfisher (Megacerylealcyon) in a nearby willow. The odd thing was, there were three of them in the same tree! Very strange indeed.

As it turns out, it was a pair of adults feeding their fledgling. This photo of the female with the youngster was digiscoped at 1/500 sec, f/2.0, ISO 1250.

July brought several photographic opportunities at Lassen Volcanic National Park. Again, unable to choose, I am including two photos taken on the same July 8th trip to the park.

When I first arrived at the park and got out of my car, I heard the drumming of what I discovered was the scarce Black-backed Woodpecker (Picoides arcticus). I was able to get some video of him drumming and this photograph shot at 1/640 sec, f/5.6, ISO 400.

A bit later as I hiked around Manzanita Lake, I met another photographer who enlightened me to the whereabouts of this Brown Creeper (Certhia americana). From his description, I had a good idea that these creepers were probably nesting. Having never seen a Brown Creeper perched, I was surprised to get this image, taken at 1/320 sec, f/5.6, ISO 640.

We get several different species of hummingbird in Shasta County during the spring and summer. This Rufous Hummingbird (Selasphorus rufus) was captured as she, and what I imagine are her offspring, fed at my sunflower garden. I tried to use the fastest shutter speed I could without compromising clarity with too high an ISO setting. This was shot at 1/1000 sec, f/5.6, ISO 800.

In September I was down in the Bay Area for a Burrowing Owl Consortium meeting and decided to stop at my first hawkwatch event at Hawk Hill in the Marin headlands. The Golden Gate Raptor Observatory has been organizing these events since 1986.

I was so blown away by the knowledge of these observers that I stayed most of the day, learned a lot and got my first look at a Broad-winged Hawk (Buteo platypterus). I wasn’t there but 5 minutes when I got this shot of my target bird at 1/1600 sec, f/5.6, ISO 320.

In November, I finally decided to step up to a new lens, the AF-S NIKKOR 200-400mm f/4G ED VR, and I love it! While practicing flight shots at Sacramento National Wildlife Refuge I snapped this photo of a female Northern Harrier (Circus cyaneus). I was set at 1/800 sec, f/9, ISO 320.

December is always a great month for birding. Why is that? The Audubon Annual Christmas Bird Count (CBC) of course! If you have never been involved with the CBC I suggest you find a count in your local area and start this year. We had our first of the four CBCs in my neck of the woods this past Saturday, the first day of the 113th Audubon Annual Christmas Bird Count.

The Rough-legged Hawk (Buteo lagopus) is a true Arctic species that breeds in taiga and tundra regions of North America and Europe (see map here). Luckily for us, their entire population migrates to lower latitudes for the winter. They usually begin showing up in Fall River Mills in October and stay through February.

This light morph Rough-legged Hawk appears to be a male due to his light belly. The female and juvenile light morphs have dark belly plumage. I took this photo Saturday morning, December 15th, during the Fall River Christmas Bird Count. It was 25 degrees and snowing off and on but we still managed to count over 120 species in our count circle. I photographed this beautiful raptor at 1/400 sec, f/8.0, ISO 320.

So, go check on where you can participate in a Christmas Bird Count during this three week period and if you want to see more bird photos, check out The Bird D’pot and Wild Bird Wednesday!