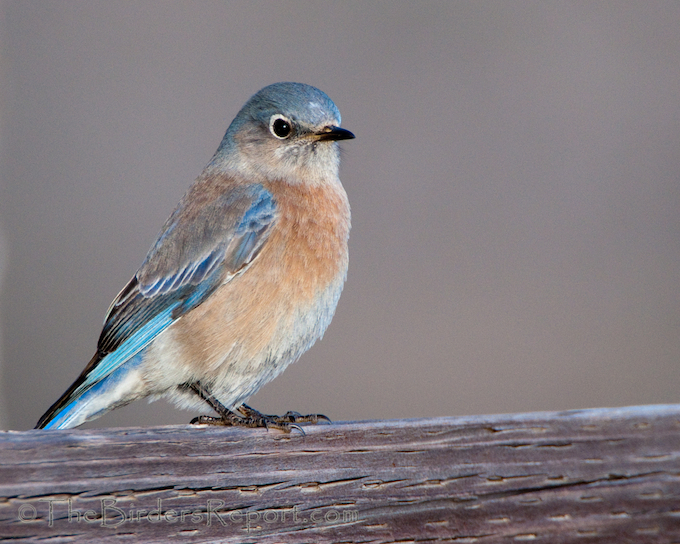 At the end of each year I like to go back and look at the bird photographs I have taken and choose the ones I like the best for a “favorite bird photo” post. I try to pick at least one photograph from each month however some months were photographically prolific, others not so much. Each description gives the camera settings used for that photograph. Click on photos for full sized images and click on the name of the bird for a link to one of my posts on that species. Most of the posts also include videos.

One of my favorite places to bird is Lema Ranch, the headquarters of the McConnell Foundation, a local philanthropic organization. Lema Ranch is the location of one of my bluebird trails so I visit there often during the breeding season and this beauty is most likely one of my offspring . I found this femaleWestern Bluebird (Sialia mexicana) pictured above in January, perched on a fence rail in perfect light, shot at 1/200 sec, f/6.7, ISO 640.

The Sacramento National Wildlife Refuge Complex in California’s Central Valley offers photography blinds that can be reserved from mid-October through March. Every year I reserve several blind opportunities which I usually set up for the winter months when bird numbers are highest. I finally captured a decent shot of aNorthern Harrier (Circus cyaneus) in flight from the photography blind at Delevan National Wildlife Refuge last January. She was photographed at 1/1250 sec, f/10, ISO 640.

Also in April, one of the most exciting experiences of my life was finally seeing theNorthern Spotted Owl(Strix occidentalis caurina). To realize the reason for the exuberance I felt you will have to read the linked post but I consider it my Best Bird of the Year. This was probably my favorite photo of the bird shot in the dark depths of the Northern California forest at 1/50 sec, f/6.7, ISO 1600.

When May rolled around I spent some time trying to get images of hummingbirds in flight with enough shutter speed to freeze their wings. I had some very cooperativeAnna’s Hummingbirds (Calypte anna) to help me. I captured this female feeding around a Peruvian Lilly at 1/1600 sec, f/6.7, ISO 640.

In June several species are nesting or beginning to nest in Northern California. One of these species is thePurple Martin (Progne subis) which, in western North America,nest almost exclusively in woodpecker holes or natural cavities. I caught this pair on June 1st with these camera settings, 1/1600 sec, f/6.7, ISO 640,as they were building their nest. The female (at the cavity entrance) had been bringing nesting material to the nest for quite some time as the male flew in behind her to see how she was doing.

I always get excited when one of my favorite cavity nesting birds makes their summer debut, theAsh-throated Flycatcher (Myiarchus cinerascens). These amazing flycatchers make their nests in my Bluebird boxes where they almost always lay four eggs. These four day old nestlings were photographed with my Kodak EasyShare V1253 camera at 1/40sec, f/3.4, ISO 200.

August in Northern California is normally very hot and there is not much bird activity, but in September, I was treated to the joy of releasing two juvenile Brown Pelicans that had been rehabilitated by International Bird Rescue.

The Golden Gate Raptor Observatoryserendipitously was conducting their annual hawkwatch only a few miles from the Pelican release site so I headed over there to see if I could spot some cool raptors. Unfortunately, the fog was pretty thick atop Hawk Hill and there was no counting that day. There was however a very cooperativeCommon Raven (Corvus corax) which I shot at 1/200 sec, f/6.7, ISO 200.

October brought me a life bird. ThePectoral Sandpiper (Calidris melanotos) is only a passing migrant in my neck of the woods, so you can imagine how excited I was to find they were in our area when I checked the local listserv. Being unable to get a decent shot from the road, I approached the occupants of the house whose pasture was the object of my quarry and they granted me permission to take some photos in good light. This one was shot at 1/800 sec, f/6.7, ISO 500.

A few weeks ago I traveled up to Fall River Mills to scout the area for our first local Christmas Bird Count. One of the birds I was hoping to see is one of my favorite raptors, theFerruginous Hawk (Buteo regalis). This juvenile I photographed at 1/400sec, f/6.7, ISO 500, was posing on a fence post and looking right at me.

Not having any great bird photos for December, I leave you with a photo of our backyard water feature covered with snow from the latest storm, taken at 1/125 sec, f/5.6, ISO 640.

Wishing everyone a very Merry Christmas and a Happy and Prosperous New Year!

To see more great bird photography check out Wild Bird Wednesday and the The Bird D’pot. Also, if you love our National Wildlife Refuges, please join us at WildlifeConservationStamp.org to promote the creation of a Wildlife Conservation Stamp to fund and expand our National Wildlife Refuge System. You can download one of our badges to place on your website to help promote our project!