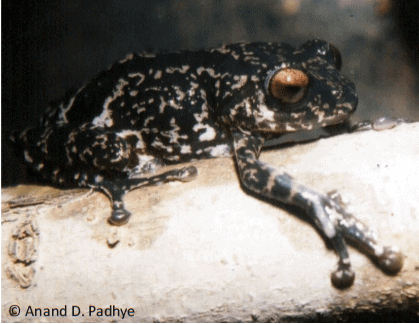 Researchers have described a new species of shrub frog Raorchestes ghatei from the Western Ghats of Maharashtra, in India. According to them, the species differs from its close relatives based on a combination of characters including small to medium-sized adult males, snout slightly projecting beyondmouth ventrally, tongue without papilla but with a lingual pit, nuptial pad rudimentary to absent and lateral side marbled with white blotches on brown to black background.

Apart from these morphological differences, Raorchestes ghatei is distinctive as per the results of a study on its 16S rRNA gene sequence. It suggests that the new species is genetically distinct and forms a monophyletic clade within Raorchestes. The new species exhibits sexual dimorphism, which makes males and females different in their appearance from females. Researchers said that the males of Raorchestes ghatei have a single sub-gular vocal sac and a tubercle on the humerus while females of the species lack them.

Christened as Ghate’s Shrub Frog, the new species does not have a tad-pole stage like many other frogs. It shows direct development. “The eggs are laid in soil under loose stones on the forest floor. Development occurs within the egg (inside the vitelline membrane) and fully metamorphosed juvenile emerges from the egg”, says the study.

As per the study, which is published in the Journal of Threatened Taxa, the species is widely distributed in the Western Ghats of Maharashtra. The Western Ghats, which is considered as one of the eight hottest biodiversity hot-spots in the world, harbors a rich diversity of amphibians with high levels of endemism. Within the last ten years, at least 37 new frog species have been described from different parts of Western Ghats.