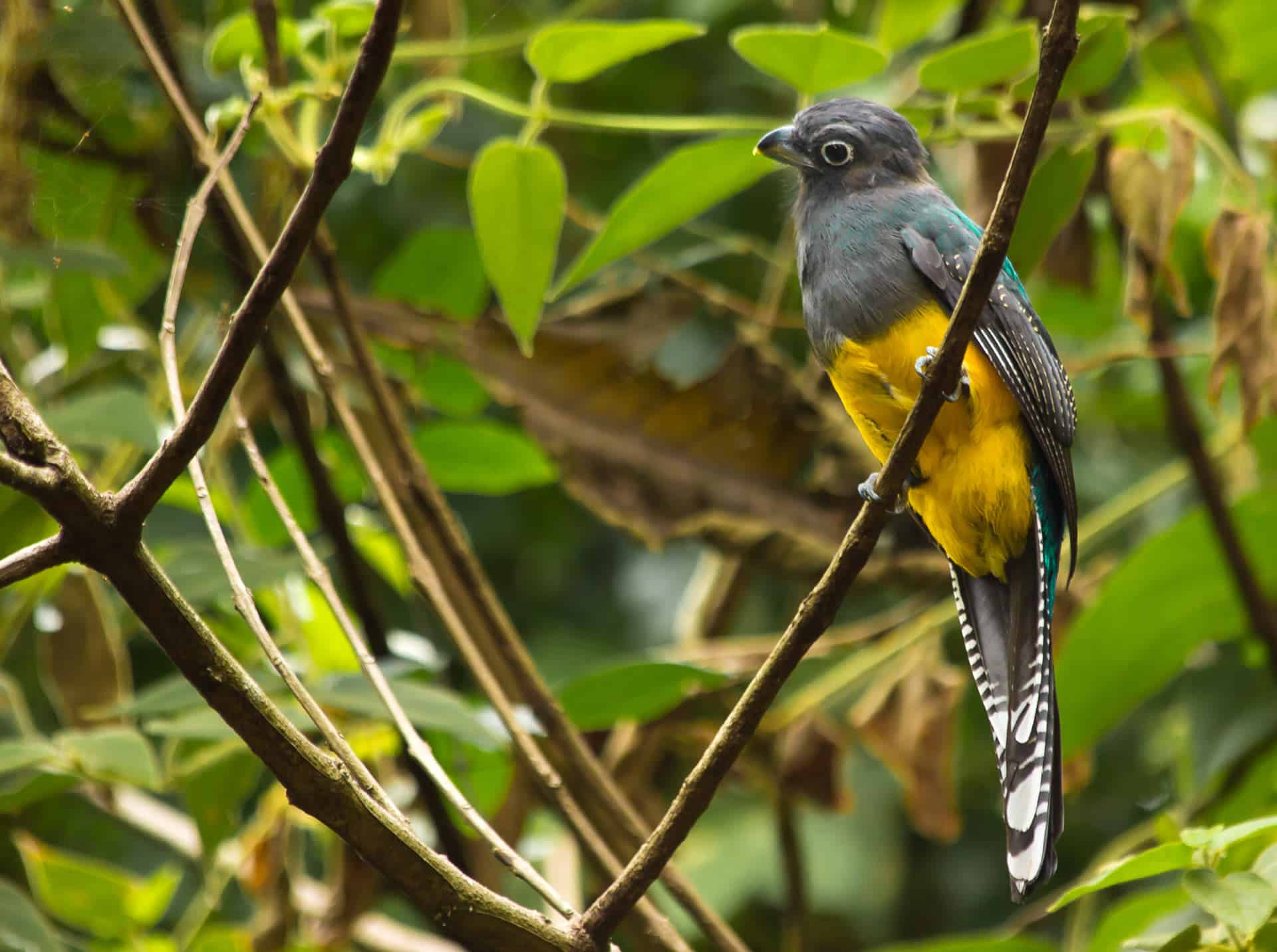 A team of ornithologists from the United States, Canada, Brazil, and Paraguay has described a new species of trogon from the Atlantic Forest of north-eastern Brazil.

The trogons and their close relatives, quetzals, are members a pantropically distributed order of birds consisting of a single family, the Trogonidae, which contains at least 43 species and 109 subspecies.

They are among the most colorful birds in the world: males are patterned with hues of iridescent green, blue, violet and purple above, and a bright red, yellow or orange abdomen; females have gray or brown plumage.

They are most diverse in the Neotropics with 29 species, of which 24 species and 66 subspecies belong to the genus Trogon.

One of them, the black-throated trogon (Trogon rufus), represents a polytypic species-complex with a controversial taxonomy.

First described in 1788, it is widely distributed in the understory and mid-levels of humid forests from Honduras to northern Argentina.

“Trogon rufus is easy to distinguish from its congeners by the unique combination of a green head in males, brown in females, and a yellow belly,” said Jeremy Kenneth Dickens, a researcher at the Museu de Zoologia da Universidade de São Paulo and the Fundación Para La Tierra, and his colleagues.

“However, with the collection of more material, it soon became recognized as notoriously variable across its distribution.”

In the new study, the researchers examined 906 specimens (547 male and 359 females) housed at 17 different museums.

“We integrated morphological, vocal and genetic datasets, including spectral data and digital quantification of barred plumage, to assess and redefine its species limits according to the foremost species concepts,” they said.

They identified five distinct populations with evidence of reproductive isolation: lack of interbreeding, levels of divergence, and divergence in traits involved in species-recognition, such as plumage, voice and behavior.

The fifth isolated population from the mountain Atlantic Forest of Brazil’s Alagoas state had a previously unknown combination of morphological, song, and mitochondrial DNA features, and represented a completely new species.

Named the Alagoas black-throated trogon (Trogon muriciensis), it can be distinguished from all other species of trogons, besides Trogon rufus, T. chrysochloros, T. tenellus and T. cupreicauda, by the combination of the green head and citrus-yellow belly.

“It is only known from Estação Ecológica de Murici in the Alagoas state, at just over 500 m elevation, where it occurs in mid-levels of the montane Atlantic Forest,” the scientists said.

“It was presumably once more widespread throughout this habitat in the Pernambuco Centre of Endemism before the deforestation of the region.”

According to the authors, the conservation status of the Alagoas black-throated trogon is worrisome with all records originating from only a single locality.

“During our fieldwork in 2019, we were able to detect only about 20 individuals, and explicitly avoided collecting more than one specimen,” they explained.

“We, therefore, recommend that it be listed as Critically Endangered as less than 30 km2 of the forest remains at the site, mostly in small fragments and not all suitable for this species.”

The discovery is reported in a paper in the Zoological Journal of the Linnean Society.