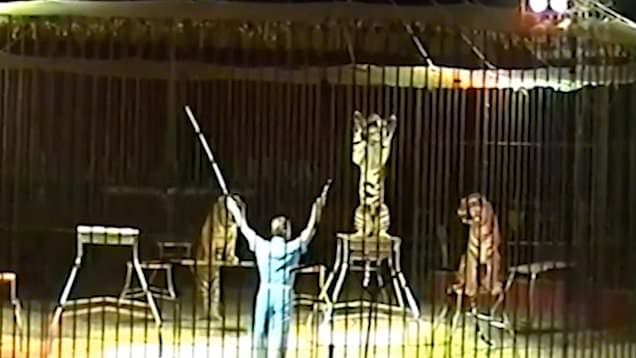 It was during a training session that four tigers snapped, killing circus trainer Ettore Weber during a rehearsal yesterday evening in Italy, just one hour before a Circo Orfei show was scheduled to start.

Weber, seen during a previous performance in the video above, was knocked down by one of the tigers. The other three big cats pounced on him.

According to the Daily Mail, medics watched in horror as the tigers played with his maimed body for about 30 minutes. The medics and the 61-year-old circus trainer’s fellow human performers were reportedly unable to do anything to help him.

A tiger trainer in southern Italy was killed when four of the animals suddenly attacked him.https://t.co/cDJPT1xaQC

This is how tigers are routinely treated by circus trainers:

In the video above, Weber can be seen holding a long stick in one hand and a whip in the other. In order to coerce the tigers into performing, he repeatedly whacks them with the stick and hits them with the whip.

If someone repeatedly beat you with a stick and a whip, you’d lash out, too.

These abusive training techniques are extremely widespread. The use of animals by circuses is inherently cruel, which is why PETA is working to end the practice. Animals used in shows are trained through punishment and food deprivation.

In order to condition tigers to perform dangerous, unnatural tricks, handlers routinely punish those who don’t comply. Circuses easily get away with such treatment, because no government agency monitors training sessions.

And this is all after the animals have been bred in captivity.

Tigers used in circuses are born into a life of misery, whereas they should roam free in the wild. They’re often separated from their mothers long before they would naturally part, causing emotional distress for both mothers and cubs. Many are forced to live inside cramped cages and are denied the opportunity to exercise, roam, socialize, forage, or play. They’re often forced to eat, drink, sleep, defecate, and urinate in the same place.

We shouldn’t be surprised when tigers act like tigers.

They’re big, dangerous predators who have teeth and claws, which they use to protect themselves. It’s not surprising that those who are denied food, beaten, or whipped might snap.

Enslaving and abusing living beings for entertainment is never acceptable.

Our goal is to make animal-abusing circus acts a thing of the past. We’ve made tons of progress, but we still need your help. Please, never buy a ticket to a circus that uses animals—attend only those that exclusively usewilling human performers.

Speak Up for Animals Used in Circus Shows

This article was first published by PETA.org on 5 July 2019.

Shered and Signed all 8 for stop animals in circuses as entertainment.

Good for the tigers! Tigers should be where they belong, not in a cage!

I would turn on him if I was made to perform stupid tricks al the time!

Animals shouldn’t be used for entertainment purposes. If a human wants to preform then carry on but do not involve animals as they can not speak for themselves. Well done to the tiger. Hopefully this is a wake up call for them and animals won’t be used ever again in circuses, let’s just hope ay.

Dont feel sorry for him at all. Payback is a bitch

We need to ban ALL Circus’s
Prosecute this piece of crap losers here !!
Stop animal cruelty and abuse!!