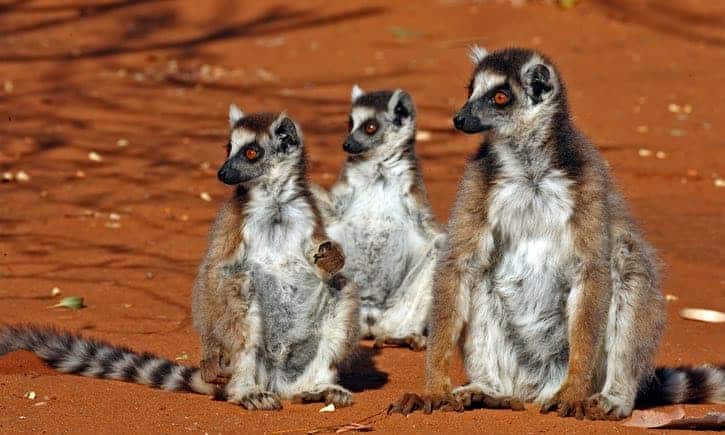 I have written before about the importance of zoos and the role they have to play in the world for conservation and education. They are in particularly important for endangered species – many animals are critically endangered in the wild and may go extinct there soon but are going strong in zoos.

Many others are already extinct in the wild and only survive because of populations kept going in captivity. Even those critical of zoos often recognise this role and that it is better to have species preserved somewhere than be lost for all time. However, even species that are common can come under severe threat very quickly or without people realising.

Take the ring-tailed lemur of Madagascar for example. This animal is almost ubiquitous in zoos and few do not keep groups of these pretty primates as they breed well in captivity and the public are fond of them. However, despite their high numbers in collections around the world, they are under severe threat in the wild.

A recent survey suggested that a huge 95% of the wild populations have been lost since 2000. This is clearly catastrophic and also means that the remaining individuals are greatly at risk. One bad year or a new disease could wipe out those that are left, and small and fragmented populations will be vulnerable to inbreeding so even a single loss can be keenly felt.

Such trends are not isolated. Giraffe are another species that are very common in zoos and unlike the lemurs are very widespread being found in numerous countries across much of sub-Saharan Africa.

Anyone who has been on safari in Kenya, Tanzania, South Africa or plenty of other countries will have had no trouble in seeing plenty of them in the wild and yet giraffe populations have gone down by a third in the last thirty years.

While less dramatic than the lemurs, this is obviously a major loss and again, whole populations (which some scientists think are in fact unique species) are on the verge of extinction.

Cheetahs too, despite protection and efforts to support populations, are showing a major decline in their wild populations, primates as a whole are doing badly (it is suggested some 60% of species are at risk) and that’s on top of the major crisis facing huge numbers of amphibian species.

Many other species are probably facing sudden drops in numbers and some estimates are particularly worrying with suggestions that 50% of species could be gone at the end of this century.

Conservationists struggle to monitor even species known to be vulnerable, so it is easy to see why common species might be overlooked especially if the perception is that they are not at risk because there are large numbers. Even a dramatic local loss might be overlooked on the assumption they are populous elsewhere but clearly that’s not always the case.

Ongoing and future issues from climate change (more extreme weather events, as well as things like overall warming and sea level changes) can have dramatic and unexpected effects on wildlife and we will likely struggle to predict which might be at risk.

The numbers of species showing major losses, and the number that we overlook until things are already critical is only likely to rise. A new study suggests that climate change has already harmed over half of all mammal species on the endangered species list for example, and that is only likely to increase as more species are put under pressure from climate change and other environmental pressures.

In short, while zoos do provide a critical reservoir for endangered species, many other animals may yet become endangered very soon, or already are and we don’t know about it. Those species that are held in zoos are already protected from any such events and trends. In may not be long until ring tailed lemurs and many other species are only held in zoos and their loss from the world would be otherwise both tragic and irreversible.

There will, I suspect, always be resistance to the arguments for keeping animals in captivity and I will not defend those bad zoos desperately in need of improvement or closure. But if we wish to keep any real measure of biodiversity on the planet, we may lean on zoos and aquaria far more than many realise.

If even common and popular species can lose a huge percentage of their populations in a few years, it may be too late to save them with even the best breeding programs or conservation efforts in the wild. As seen here, too often we do not even know a species is under threat until their numbers have crashed to dangerously low levels and this is a trend that is only likely to continue.

This article was first published by The Guardian on 08 Mar 2017.

We invite you to share your opinion whether the world still needs zoos? Please vote and leave your comments at the bottom of this page.