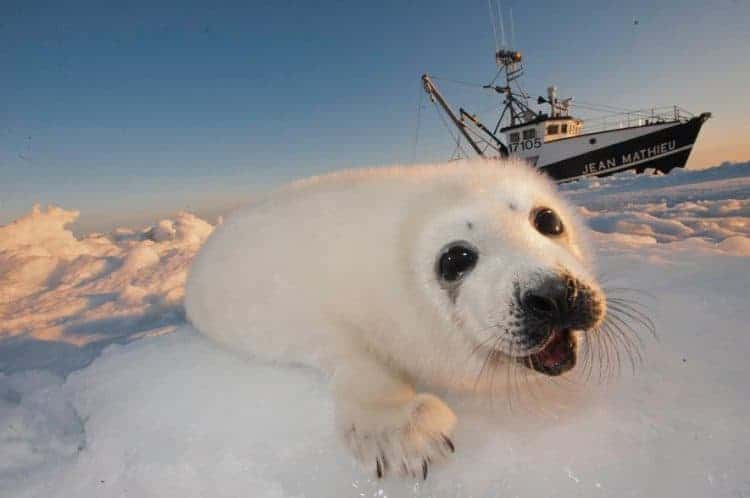 Not long after European settlers established a commercial seal industry in Canada in the early 1500s, business was booming. Back in the day, seal oil was sold in the Old World for use as a machine lubricant.

And later, demand for newly in-vogue fur meant that hundreds of thousands of harp seals were killed each year in the Gulf of St. Lawrence and off the coasts of Newfoundland and Labrador so North Americans and Europeans could drape themselves in sealskin coats.

Much to the alarm of animal welfare advocates, this year Canada opened the hunt two weeks early, on March 28—continuing its endorsement of a disappearing industry that many nations around the world consider superfluous and barbaric.

The government requires sealers to go through training in humane killing practices before they can be licensed. To ensure that seals die quickly, it mandates that sealers target a seal’s head using high-powered rifles, clubs, or a hakapik—a wooden staff with a hook at the end. The sealer is then required to ensure that the animal is dead and to sever its arteries before skinning it.

But animal welfare groups claim that the killings are inhumane, with hunters impaling pups in their face or eyes and shooting seals from moving boats. Hunters generally target pups for their soft coat. “Many animals are left to suffer in agony, crawling through their own blood on the ice,” says Rebecca Aldworth, executive director of the Humane Society International-Canada.

Anti-sealing campaigns have led more than 35 countries, including Russia and the members of the European Union, to ban seal imports, although they still allow products that come from the Canadian Inuit. (The Inuit, who have subsisted on seal for thousands of years, have their own separate hunt.) “We lost our markets for the large quantities of seal furs and pelts,” acknowledges Eldred Woodford, president of the Canadian Sealers Association.

In 2006 fur made up $16.4 million of the $18 million worth of seal products Canada exported. Preliminary data from the Canadian government shows that sales of all seal products overseas plummeted to less than $1 million last year.

So given the intensity of opposition to the hunts and the falling demand for seal products, why does Canada still hold onto its sealing industry?

One argument by fishermen is that in some areas seals gobble up too much cod, whose stocks have collapsed. But like many claims related to the seal hunt, this is up for debate: Scientists counter that cod makes up only a very small portion of a seal’s diet and that the fishing industry, not seals, is to blame for the decline.

The government justifies the hunt by citing its cultural and economical importance. “Historically it’s played an important role from generation to generation,” says Adam Burns, the acting director general of fisheries management at Canada’s Department of Fisheries and Oceans. “It still does generate economic activity in coastal communities where it’s badly needed.”

According to Woodford, sealing can account for as much as 40 percent of the annual income for sealers, the majority of whom live in the economically troubled province of Newfoundland and Labrador and earn most of their living by fishing. That partly explains why the Canadian government allocates $2.5 million a year to oversee the hunt, according to the Guardian, and why the Newfoundland and Labrador government has lent seal processors money and announced in 2013 that it would spend $500,000 on a pilot project to develop seal meat products.

Any clue as to the industry’s direction today depends on whom you ask. Bernie Halloran, owner of a seal processing plant in Newfoundland called PhocaLux International, pins his hopes on Chinese desire for seal furs, meat, and oil, prized for its high content of omega-3 fatty acids and sold as a health supplement. Halloran opened a seal products factory and store there, but earlier this year he told the Canadian magazine Maclean’s that business has been slow.

Meanwhile Dion Dakins, CEO of Carino Processing, a long-standing seal operation based in Newfoundland, says that although he still does business globally, the primary market for his seal products is at home. “From the low point, perhaps in 2011, we’re seeing steady increase in supply of products to market,” Dakin says. “Canada is a very important market for us right now.”

Although there is demand for seal meat and oil in coastal communities, it’s unclear whether Canadians alone can save the industry. In 2015 Carino turned down $1 million from the Newfoundland government to help it buy pelts from sealers, noting that it already had pelts in storage it hadn’t yet sold. A few notable chefs in Canada have added seal meat to their menus (braised seal flippers, pulled seal, seal carpaccio), but there’s no evidence that the public as a whole has developed a strong taste for seal.

Regardless, Dakins and others believe there’s no good reason to revile the industry. “For anyone to condemn a group of humans for conducting an activity that improves societal conditions of a small rural community is simply absurd and unjustified,” he says.

But animal welfare groups say that even though seals are still abundant, they shouldn’t be hunted, not only because the industry is cruel but also because seals are facing new pressures from climate change. With warming waters, the stable sea ice platform baby seals need for nursing is melting. Pups have been dying, and scientists have warned that if nothing changes, the average pup survival rate will continue to drop.

This article was first published by National Geographic on 05 Apr 2017.

We invite you to share your opinion whether Canada should ban the hunting of seals? Please vote and leave your comments at the bottom of this page.