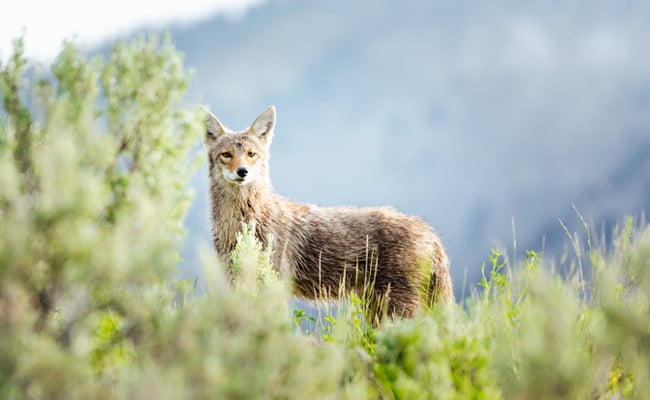 Wildlife and animal advocacy organizations are calling on officials in Oregon to shut down an upcoming coyote killing contest, and to make these horrific events illegal throughout the state.

These contests, which are also known as drives, tournaments or derbies, reward people of all ages with cash prizes and weapons for killing the biggest and most animals. Sadly, many of the wild animals who are targeted in these events are left without legal protection and can be killed year round in unlimited numbers, and then discarded like nothing more than trash.

While a number of species are targeted in these contests, coyotes are popular victims. Yet, they are fortunately not without advocates who have been working tirelessly to raise awareness about these events and shut them down.

Past events in the state have already drawn widespread outrage, and this week, a coalition of 18 animal advocacy and conservation organizations asked the Oregon Farm Bureau to cancel the upcoming Young Farmers & Ranchers (YFR) 1st Annual Coyote Hunting Tournament, which is scheduled to take place this November 30 – December 2 in Burns. At this event, teams will compete to kill as many coyotes as possible anywhere in the state, while the team with the greatest total weight of all coyotes killed will win.

While these competitions are often held under the guise of wildlife management, or predator control, wildlife advocates and scientists argue that they’re not only cruel but counter to the goal of reducing conflicts with “nuisance” animals and that the indiscriminate killing of predators also ignores the valuable role they play in maintaining healthy ecosystems.

It’s more than clear that these events are not about wildlife management or even hunting, but about glorifying the senseless killing of animals for fun and personal gain. Earlier this year that was made abundantly clear by an undercover investigation conducted by the Humane Society of the United States that offered a glimpse into these contests, exposing the dangerous and indifferent attitudes they promote towards wildlife – which is especially troubling when it comes to what they teach children about our relationship with the species we share this earth with.

“These competitions are symptomatic of a broader problem of misguided wildlife governance by state agencies that fails to recognize and value the crucial ecological roles of native predators and that considers it more expedient to kill than to implement responsible, science-based conservation,” said Dave Parsons, MS, retired career wildlife biologist with the U.S. Fish and Wildlife Service and Project Coyote Science Advisory Board member.

Thankfully progress is being made towards ending them. Following a victory in California in 2014, Vermont became the second state in the nation to ban them this year, and more will soon hopefully follow their lead. According to Project Coyote, Oregon will be considering doing the same this upcoming year.

“Killing coyotes for fun and prizes is ethically repugnant, morally bankrupt and ecologically indefensible,” said Camilla Fox, founder and executive director of Project Coyote. “It is high time this practice is banned in Oregon, following the lead of California and Vermont.”

You can help by signing and sharing the petition calling on lawmakers in Oregon to ban these indefensible contests targeting all species.

We invite you to share your opinion whether cruel Coyote killing contests should be banned? Please vote and leave your comments at the bottom of this page.

Sponsoring a ‘contest to kill’, c’mon. This shit is nonsensical.

Definitely. I don’t know why some people enjoy killing animals so much.

Only 48 states to go to end legal bounty hunting of wildlife in the United States of America in the 21st. century..

Another disgusting display of human cruel and stupid

Slaughtering (which is what this is) predators or removing other species of wild animals only defeats the “purpose”! Thats the excuse used – but quite honestly – these people arent hunters by any stretch of the imagination! They like to kill!!! Thats their purpose. Exposing children to this kind of mindset certainly is telling when you look at the many shootings & killings being done right now by – in many instances – young people! If thats what they are taught? How do we expect them to react?

Don’t kill for no reason , u don’t eat coyotes , they kill rats mice and they clean up stuff, keep ur chickens in there cage , or they will eat them and cat and smalls dogs , they r cleaners don’t kill them

Any contest for killing animals should be banned.