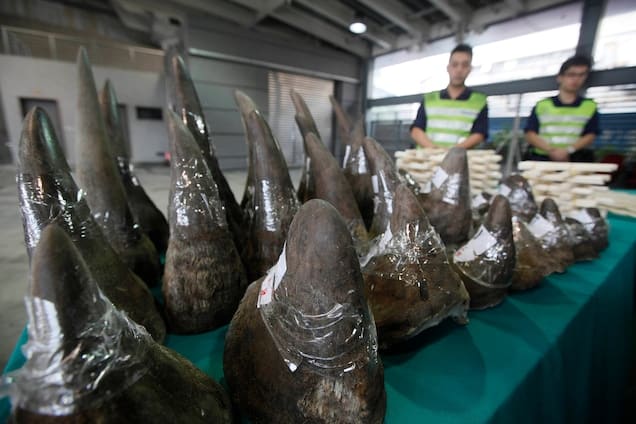 Trade in bioengineered rhino horn shouldn’t be allowed. That’s the contention behind a petition filed today with the U.S. Fish and Wildlife Service by the Center for Biological Diversity, a U.S.-based group that uses science and law to protect the environment, and WildAid, a nonprofit organization that aims to eliminate illegal wildlife trade.

At issue is bioengineered, or cultured, rhino horn under development or consideration by several companies, including Pembient, CeratoTech, Rhinoceros Horn LLC, and Stop Rhino Poaching Through Synthetic Rhino Horns. Pembient has already produced prototypes of both powdered and carvable horn and plans to put its “essence of rhino horn” in beer, skin care products, and medicines. The other companies are raising money for research.

While their methods vary, they essentially involve manufacturing fake rhino horn using elements derived from a real one. The result is a product far different from fakes on the market today—namely, one that is visually, chemically, and genetically identical to the real thing.

Pembient explains that it makes its cultured horn by adding rhino genetic code to yeast to create a substance, to which it adds rhino DNA. It then uses that mixture as “ink” in a 3-D printer to produce a special synthetic keratin. In other words, a cultured rhino horn with a rhino DNA signature.

The company has said it also intends to create a full line of bioengineered products from other protected species, including elephant tusks, tiger bones, and pangolin scales.

Today’s petition asks the Fish and Wildlife Service to prohibit the import, export, and sale of biologically engineered rhinoceros horn, as well as cultured parts or products from other protected wildlife.

It contains five justifications for such a ban.

The service already has the authority to ban cultured horn under existing laws.

Both the Endangered Species Act and the Rhinoceros and Tiger Conservation Act ban the export, import, and interstate sale of endangered or listed species and their parts, products, and derivatives. The Rhinoceros and Tiger Conservation Act also prohibits the sale of any product, item, or substance intended for human consumption or application containing, or labeled or advertised as containing, any substance derived from a species of rhinoceros or tiger. The idea behind the law is that even saying a product is made from rhino horn has the same negative impact on the wild species as if it contained the real thing.

A recent study of legal trade in captive-bred tokay geckos showed that it facilitates illegal trade and intensifies pressure on wild populations. Similarly, undercover studies of the domestic ivory markets in China and Hong Kong have exposed how these legal markets facilitated “laundering” of illegal ivory from newly killed elephants, complicating law enforcement.

Because cultured rhino horn has the same appearance and chemical and genetic characteristics as real horn, proving that an item comes from an illegal, wild rhino will be difficult, if not impossible. That opens up opportunities for traffickers to avoid seizures by claiming their genuine horn contraband is fake. It also hinders prosecutions. Even if a DNA “watermark” is added to resolve that problem, testing would be expensive and time-consuming.

Pembient has said it can sell its rhino horn for one-eighth the price of real rhino horn. That opens the market to a new base of less affluent consumers and expands it for those who want rhino horn to “show off.” It also confuses consumers by signaling that it’s legal to buy and sell rhino horn.

Trade in cultured horn lends credibility to the unproven claim that rhino horn has medicinal value and undermines efforts to reduce demand.

Despite no scientific evidence that rhino horn has health benefits, rumors persist that it can treat everything from cancer to impotence. Many NGOs, such as WildAid, have put significant resources toward educating consumers that rhino horn has no medicinal value. Marketing for cultured rhino horn undercuts these efforts. Rhinoceros Horn LLC, a startup in Portland, Oregon, states that its product “is biologically identical to the chemical structure of rhino horns, but grants natural health benefits backed by scientific publications and clinical studies.” Initial advertisements by Pembient presented the product as a desirable beauty aid and hangover cure. Pembient even said it was working with a Chinese brewery to put the product in beer.

“It’s not a hangover cure,” says Sarah Uhlemann, senior attorney for the Center for Biological Diversity, “but if you put it in beer, what does that say to the public? How can a consumer know what to believe? It creates incredible consumer confusion.”

And that, she says, would be bad for rhinos in the wild. “We need to get a handle on it while these products are still in development. Companies and investors should be aware that there are very serious legal concerns.”

The Fish and Wildlife Service could simply ban the import, export, and sale of cultured products by denying the required permits or, if producers don’t seek a permit, by bringing an enforcement action. It could also issue regulations that ban trade in cultured products from imperiled species. There’s no timeline for this rulemaking process, but it typically takes about a year.

The service hasn’t yet had a chance to review the petition and can’t comment on its specifics. But Deputy Chief of Law Enforcement Ed Grace said, “Experience demonstrates that efforts to ‘flood the market’ with products produced from protected wildlife—either by producing synthetic alternatives or raising animals in captivity for harvest—often fail to achieve their stated goal. Such efforts often create more demand from consumers, even as products from wild animals and plants continue to command a premium over synthetic or farmed alternatives.”

He added: “We also have significant concerns about injecting products into the market that would make it harder for law enforcement to detect poached and trafficked wildlife products, or allow criminals to disguise the source of illegal products by commingling them with these alternatives.”

This article was first published by National Geographic on 10 Feb 2016. Lead Image: Customs officers in Hong Kong stand guard near seized rhino horns. A group of NGOs wants the U.S. to ban the export of faux rhino horn, which several companies plan to bioengineer. Photograph by Kin Cheung, Associated Press.

We invite you to share your opinion whether fake rhino horn be banned? Please vote and leave your comments at the bottom of this page: