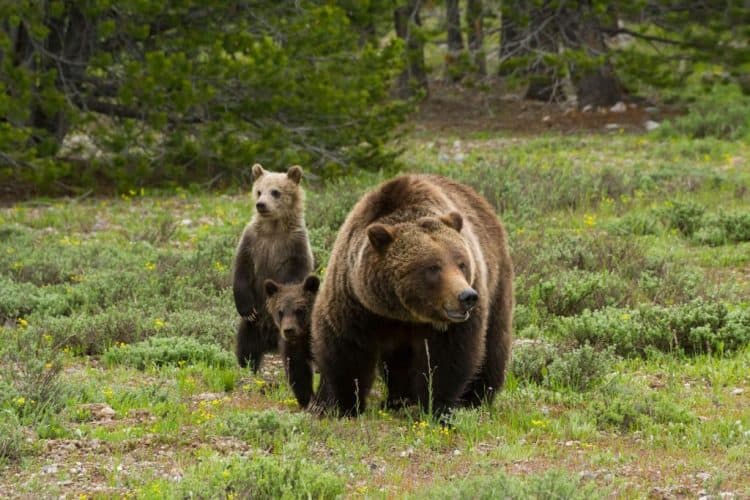 For the first time in nearly two human generations, the iconic grizzly bears that have long been associated with the wild environs around Yellowstone National Park will be legally hunted as trophy animals.

The Wyoming Game and Fish Commission on May 23 gave its unanimous approval to commence a controversial hunt of bruins this coming autumn. They will allow for 22 grizzlies to be hunted, 12 of which can be females. The apex predators can be shot for sport on public and private lands just beyond Yellowstone and its crown jewel neighbor park, Grand Teton.

Few wildlife issues in recent years have been more contentious or stirred stronger emotions than the debate over the future of grizzlies in the American West. The debate resonates not only among locals but internationally, given the draw of the world-famous parks and the rock star profile these ursids have on social media.

Pushed to the brink of annihilation only decades ago, the rescue of grizzlies in the Greater Yellowstone Ecosystem is hailed as one of the most notable achievements in recent U.S. conservation history. In 1975, when the bruin population was brought under emergency federal protection by the Fish and Wildlife Service, scientists say just 136 individuals persisted in Yellowstone and nearby wildlands. Today there are roughly five times as many (around 700), with bears showing up in places where they haven’t been seen in over a century.

A year ago, the federal government relinquished management to three states in the northern Rockies and Wyoming’s grizzly hunt will be the first in 44 years. While wildlife officials here insist that the 22 grizzlies slated for harvest will not jeopardize bear recovery, a wide chorus of critics condemns trophy killing. They say it is not only wrong ethically but also biologically unsound, considering grizzlies are among the slowest terrestrial mammals on earth to reproduce.

At the center of the debate, many say, looms a larger philosophical question: what is the purpose of resuscitating imperiled wildlife in the 21st century? It takes on added dimensions for difficult-to-recover, wide-ranging animals like grizzlies that need a lot of space to roam and are feared by people—yet they face increasing threats from human population growth, development pressure, and climate change.

“Grizzlies are highly intelligent animals that deserve our reverence and respect,” says the noted American wildlife photographer Thomas D. Mangelsen, who recently was profiled on the TV show 60 Minutes. “Wyoming is treating them like surplus trees that can be logged. How much dignity is there in blowing away an animal so that one individual can claim bragging rights and turn a grizzly into a mounted head on the wall or bear rug for the floor?”

Mangelsen, who lives in Jackson Hole, has closely watched and documented the lives and deaths of one bear family led by a mother grizzly given the numeric identity “399” by researchers. She and her clan live part of the year inside Grand Teton Park, adjacent to Yellowstone, yet den in the national forest where big-game hunting is allowed.

Tens of millions of dollars have been spent trying to keep bears alive and grow the population. Wyoming’s approval of the sport hunt was not unexpected.

What surprised many is the number of grizzlies it is allowing to be killed, on top of lethal removals relating to management actions and other causes of mortality. In 2017, 56 bears died from poachers, conflicts with hunters and ranchers, and impacts such as collisions with cars in the region.

Erring on the side of caution, Montana, another state in the Greater Yellowstone area, declined to hold a hunt in 2018. Idaho says it will allow only one male bear to be killed.

Female grizzlies often don’t successfully rear their first cubs until they are nearly a decade old, and then, afterward, a mother gives birth to new offspring only every three years. Since the loss of a relatively few adult females can mean the difference between a rising or falling population, aggressive efforts were undertaken to keep every one alive over the past decades.

The story of grizzly 399 illustrates just how impactful the survival of a single healthy female can be. Over the course of her amazing 22-year life, 399 has given birth to three different sets of triplets, as well as twins. In all, 17 bears are descended from her—yet a high percentage have died in run-ins with people, showing how fragile recovery can be.

“Grizzly 399 is remarkable in that millions of people know about her,” Mangelsen says. “But the fact is there’s a version of 399 in every river drainage where you find grizzlies today in Greater Yellowstone.”

Wyoming wildlife commissioners agreed with the state’s senior carnivore manager, Dan Thompson, who says hunting is an important management tool. When responsibly employed, it engenders more support for bear conservation among rural people who live with grizzlies in their midst every day, he says.

“It’s time [for bears to be hunted],” says former U.S. Sen. Alan K. Simpson, a resident of the Yellowstone Park gateway town of Cody. Still angry over lawsuits brought by environmentalists that slowed the handoff of wolf management over to state control, Simpson says hunting of species deemed biologically recovered is part of the deal that comes with removing animals from federal protection.

Yet some defenders of grizzlies disagree. Populations of bald eagles and peregrine falcons were also resuscitated in the U.S. using the Endangered Species Act, they note, but neither of those iconic birds today can be hunted.

Bonnie Rice, a representative of the Sierra Club in the region, points to a range of potential problems with the hunt, including female bears being mistaken for males, mother bears being shot and thus having their cubs orphaned, bear baiting (which is allowed in one part of the hunt zone) causing conflicts for grizzlies, and bears like grizzly 399—known for her high reproduction—being taken out indiscriminately.

To offer some protection to well-known bears like 399, the state is not allowing hunting in close proximity to Yellowstone and Grand Teton parks—but bears can be shot a quarter mile off of roads in all seven of the hunting zones.

Thompson said any hunter that draws a grizzly tag must undergo hunter education. The last thing the state wants is for the population to dip below 500 bears, he says, which could result in grizzlies ending up back on the federal protected species list. Adequate safeguards are in place to insure that doesn’t happen, he says.

At present, a number of lawsuits brought by environmentalists and Native American tribes are moving through the courts seeking to have restore federal protection for grizzlies, which would result in sport hunts being halted.

More than 650,000 public comments were submitted in response to removing bears from federal protection and allowing states to recommence hunting. The overwhelming majority expressed opposition. Scientists and wildlife photographers have also written letters noting that bear-watching—as anchors to a $1 billion annual nature-tourism economy in the region—make grizzlies worth far more alive than dead.

In Wyoming, sentiment among citizens is divided over hunting, though pro-hunting forces have a strong, influential voice. “The greatest trophy in the Lower 48 is a male grizzly. Now you won’t have to go to Alaska to get a grizzly,” hunter Scott Weber of Cody, Wyoming, a member of the organization Wyoming Sportsmen for Fish and Wildlife, told a local newspaper. Lots of people, especially hunting outfitters and guides, share Weber’s enthusiasm.

Award-winning hunting writer Ted Kerasote, who lives in Kelly, Wyoming, fronting the Tetons, has had grizzlies wander through his yard. Kerasote says he hunts only animals that he can eat.

“People try to tell me that if I’m not in favor of killing grizzlies, then I’m anti-hunting. I’ve been called that even though I’ve shot more elk than those people who are making the claim,” he told me. “There’s an atmosphere of tremendous polarization in this country. It’s based on the belief that unless you are wholeheartedly with us, you are against us. Those who say we need to kill grizzlies for fun are on the wrong side of history. And they’re not doing the cause of hunting any favors.”

The states can’t argue that hunting is an essential management tool because it isn’t, Kerasote says. Grizzlies have been stewarded successfully in Greater Yellowstone without hunting for four decades. Further, state officials can’t claim that revenues generated through the sale of bear licenses—$6,000 for an out-of-state hunter, $600 for a Wyoming resident—will fix funding woes. Wyoming has been in a severe budget crisis because of falling revenues from declining coal markets.

“Wyoming or Montana or Idaho are not going to maneuver their way through larger fiscal crises on the backs of dead bears,” he notes. “You can’t kill that many bears through hunting, on top of the number already dying through a variety of causes, and not have a negative impact on the bear population.”

Randy Newberg of Bozeman, Montana, was a member of a special working group tasked with assessing the status of the Greater Yellowstone bear population. He hosts one of the most popular sportsmen’s shows on youtube and supports the hunt. He worries, however, that a bad incident could become a PR nightmare for the image of hunting, which is facing declining numbers nationwide.

Public opposition to hunting grizzlies is not isolated to Greater Yellowstone. Late in 2017, government officials in the western Canadian province of British Columbia, where there are an estimated 15,000 bears, moved to ban all trophy hunting of grizzlies.

“As someone concerned about hunting and its positive role in society, I am deeply concerned that hunting of grizzlies in Greater Yellowstone could make the backlash caused by Cecil the lion [in Zimbabwe] look like a 1.0 on the Richter scale,” he said. “The moment somebody shoots a bear like 399, by accident, out of spite or stupidity, this will turn into a disaster for the hunting community of an order of magnitude like the San Francisco earthquake of 1906.”

He offers an advisement to fellow hunters. “The grizzly is unique. states should take a lot of pride in the fact they’ve played a role in recovery,” Newberg said. “But grizzlies need to be treated like the special species they are, whether we manage them for hunting or not hunting. If we mess this up, then shame on us. The public will never forgive us if we do.”

Appearing before the Wyoming Game and Fish Commission, Mangelsen, a former hunter, pleaded that the trophy killing of grizzlies be put on hold.

“I and many, many of my hunter friends believe that killing grizzlies for fun, for sheer sport or treating them as trophies to satisfy a few individual egos is wrong,” he said. “Ponder the bigger picture. There is no compelling need. These animals deserve better. As my dear friend Jane Goodall says, they are extraordinary and rare in the modern world.”

If environmental lawsuits don’t prevail in stopping the hunt, Mangelsen says there is talk among grizzly advocates of staging mass protests. “Instead of protests like the one that happened at Standing Rock in response to building the Keystone XL pipeline, we’ll be calling ours Standing Bear.”

This article was first published by National Geographic on 24 May 2018.

We invite you to share your opinion whether the hunting of “grizzlies” in Yellowstone should be put on hold? Please vote and leave your comments at the bottom of this page.

It should be banned forever as should all sport and trophy hunting!