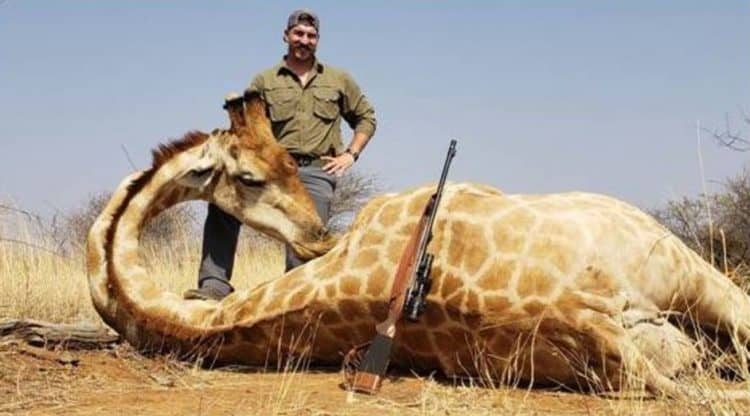 While he was vacationing in Africa, Idaho Fish and Game Commissioner Blake Fischer did a lot of shooting. Not with a camera, unfortunately, but with a rifle and bow.

Fischer and his wife slaughtered over a dozen animals during Nambia’s trophy hunting season, including a giraffe, leopard, impala, sable antelope, waterbuck, kudu, warthog and, most disturbingly, a family of four baboons.

With a big smile on his face, Fischer proudly posed beside their carcasses—one baboon appears to be holding a baby—in photos of these and the other animals he killed. He emailed the horrible photos to about 125 people.

“Anyways, my wife and I went to Namibia for a week…first she wanted to watch me and ‘get a feel’ of Africa…so I shot a whole family of baboons,” Fischer callously wrote in the email. “I think she got the idea quick.”

After reading this and seeing the shocking photos, several outraged former Fish and Game commissioners fired off an email to Idaho Governor C.L. “Butch” Otter, demanding that Fischer either resign or be fired.

Fischer quickly apologized—for sharing the photos, that is. He showed no remorse for killing all those animals.

In Idaho, the governor appoints seven Fish and Game commissionersto represent different regions. They administer the state’s fish and game policy, which states that, along with managing wildlife, these animals are to be “preserved, protected and perpetuated.” Fischer, whose eight-year term began in 2014, somehow failed to mention this part of the statute in his pathetic excuse.

“I’m sure what you did was legal, however, legal does not make it right,” Fred Trevey, a former Idaho Fish and Game commissioner, wrote to Fischer in an email obtained by the Idaho Statesman. “Sportsmanlike behavior is the center pin to maintaining hunting as a socially acceptable activity.”

The leader of a pro-hunting group also said what Fischer did was wrong and immoral. “I’ve had issues with him trying to monetize hunting, trying to encourage Idaho to get into trophy hunting and putting our game to the highest bidder,” Steve Alder, executive director of Idaho for Wildlife, told the Los Angeles Times.

Three days after the Idaho Statesman story was published, the governor fortunately did the right thing and told Fischer to resign.

“I have high expectations and standards for every appointee in state government,” Otter said in a statement. “Every member of my administration is expected to exercise good judgment. Commissioner Fischer did not.”

In his resignation letter, Fischer wrote that he “did not display an appropriate level of sportsmanship and respect for the animals I harvested.” That’s right, “harvested,” not “killed for sport and photo opportunities.”

Although some former commissioners, hunting advocates and constituents supported Fischer, encouraging him to “Stand strong” and “Keep your head up,” according to the New York Times, no one should have any sympathy for him losing his job. What’s truly tragic are the deaths of all those beautiful animals at the hands of a trophy hunter with no respect whatsoever for their lives.

We invite you to share your opinion whether the ‘sport’ of trophy hunting should be banned? Please vote and leave your comments at the bottom of this page.