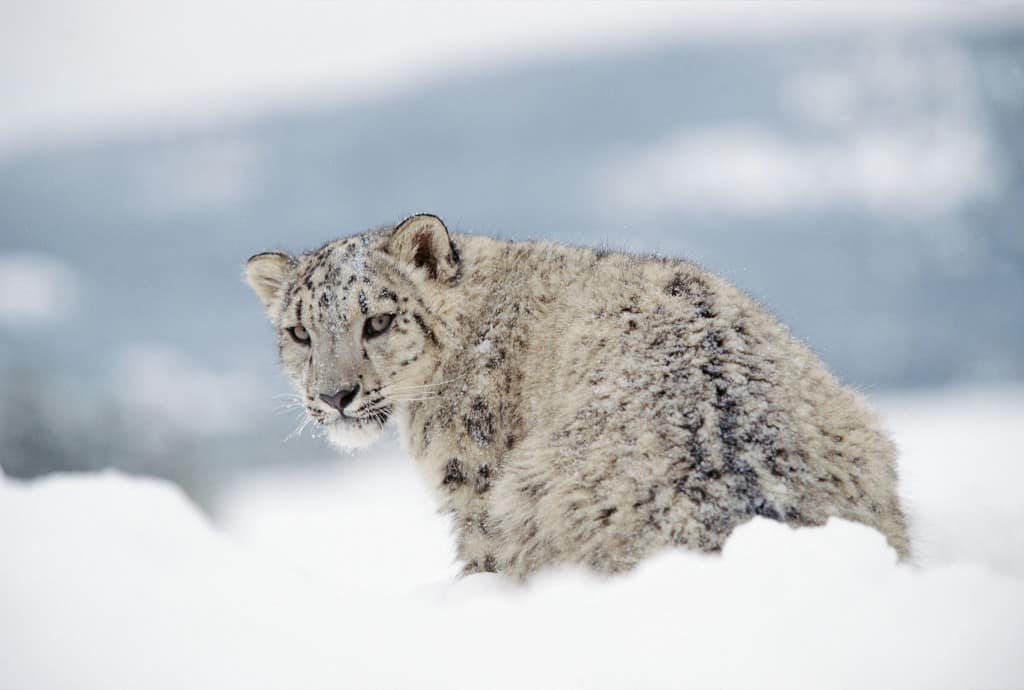 BOKONBAYEVO, Kyrgyzstan – Kyrgyz folklore is laden with stories that warn its adherents against the over-hunting of animals. In one foreboding tale, Kodzhodzash, the leader of the Ak-Bars tribe, brutally ignores the wish of a female ibex, shooting dead her child and her mate.“May your father cry over you as I cry over my murdered children and for the loss of my kind,” the ibex curses, before luring the hunter to his death.

Despite these admonitions, trophy hunting has become a lucrative industry in Kyrgyzstan, drawing tourists from across the world with its low prices and lax hunting laws.

Until last year, a license to kill Kyrgyzstan’s most prized trophy, a Marco Polo sheep, was $3,600 while a Siberian ibex could be shot for just $500. The fees have almost doubled in the last year, yet remain regionally and globally competitive.

Both the Marco Polo sheep, a subspecies of the argali (Ovis ammon), and the Siberian ibex (Capra sibrica) can be found on the International Union for the Conservation of Nature (IUCN) Red List, with the former listed as Near Threatened.

The existing law in Kyrgyzstan does not prohibit the hunting of rare, threatened or endangered species. Instead, it states that animals listed in the Red Book of Kyrgyzstan, including the Marco Polo sheep, can be pursued by those in possession of a special license.

Argali numbers have suffered accordingly, alongside those of its predator – the endangered snow leopard (Panthera uncial). The population of this high-altitude predator has been in rapid decline over the last 20 years, with between 4,000 and 7,000 thought to remain as of the last census in 2003. According to the IUCN, major threats to the snow leopard include the overhunting of its prey – ungulates like the Marco Polo sheep and ibex – and the rapid loss of its habitat.

Scientists say preserving Kyrgyzstan’s snow leopard territory is key to the survival of the species as the country’s Tien Shan mountain range serves as a corridor between the northern snow leopard populations in Russia, Mongolia and Kazakhstan, and the more southerly groups in the Karakoram and Hindu Kush.

Yet despite its strategic location, 6 percent of the country has been given protected status by the government while 70 percent is classified as a hunting concession. As a result, local ecologists estimate that half of the country’s ecosystems have been affected over the last 25 years.

“The snow leopard used to reside in our alpine ecosystem with ibex and argali sheep in the same system,” said Emil Shukurov, one of the country’s leading ecologists and chairman of the Aleyne Ecological Movement of Kyrgyzstan.“The hunting of ibex and argali sheep has had a knock-on [effect] on the snow leopard – the situation is so bad we only have three breeding populations of snow leopard in Kyrgyzstan,” he told Mongabay.According to Shukurov, a healthy herd of argali consists of around 100 individuals. In Kyrgyzstan, those herds have fallen to an estimated 20 to 50 animals, indicating that they are not reproducing sustainably.“The trouble with our hunting industry is that more animals are being killed than are naturally being produced, so we are hunting species whose ecosystems are collapsing,” Shukurov said. “Hunting and wildlife conservation cannot coexist.”

It was against the backdrop of these collapsing ecosystems that Kyrgyz campaigners proposed a complete ban on hunting until 2030. The bill was narrowly defeated in parliament earlier this year – with 56 votes to 52 – yet the proposal has sparked a fierce debate over the environmental sustainability of the industry.

In a letter to Mongabay, the assistant director of the State Agency on Environmental Protection and Forestry, Arsen Rysepekov, denied that the hunting industry, which it oversees, was having a negative impact on wildlife populations. He said sustainability is ensured through strict quotas on the number of hunting licenses granted to foreign tourists.

“Each year the Kyrgyz Republic, as agreed with the National Academy of Sciences of the Kyrgyz Republic, sets a limit of 70 Argali sheep to be hunted on foreign hunting tours,” Rysepekov wrote. “This number makes up about 0.5 percent of the overall number of such species.”

A similar quota of 0.8 percent is applied to ibex licenses, which translates to a harvest of between 400 and 450 individuals per year.“According to the National Academy of Sciences of the Kyrgyz Republic, this number does not have a large impact on the population of the species overall,” Rysepekov wrote.The government’s estimates are not without controversy. According to the State Agency on Environmental Protection and Forestry, the number of Marco Polo sheep in Kyrgyzstan grew by 9.3 percent between 2012 and 2013 while the ibex population grew by 3.5 percent.“These numbers are falsified,” Shukurov said. “The government has been providing exaggerated population numbers to support the campaign against a hunting ban. Naturally, argali herds can only increase by 3 – 5 percent each year. It’s even lower for the ibex, just 1 percent.”

Data from the government also show a decline in the species. In 2016, estimates from the National Academy of Sciences of the Kyrgyz Republic provided by the State Agency on Environmental Protection and Forestry pegged Marco Polo sheep and ibex at their lowest numbers in eight years.

“The hunting department says there are controls, but sometimes people will come for one animal but are allowed to shoot two or three,” said Janar Akaev, a Member of Parliament who campaigned in favor of the hunting ban.

Indeed, overhunting appeared rife in 2016, with 435 recorded violations of the hunting law and only 370 official hunting licenses for the Marco Polo sheep and ibex combined.

“It is a very corrupt system,” Akaev said. “The same agencies that give out the hunting licenses own the hunting concessions and are therefore making all the money from the foreigners. That is why the state agency opposed the legislation.”

It is under these questionable financial circumstances that Kyrgyzstan’s national parks have struggled to make ends meet, with reports that rangers are woefully underpaid, undertrained, and under-equipped.

The State Agency on Environmental Protection and Forestry declined an opportunity to respond to these allegations of corruption.

However, in his written response, Rysepekov claimed the trophy hunting industry brought in nearly three-quarters of a million dollars in 2016, with some of that revenue allocated for the maintenance of rangers who protect the concessions from illegal poaching.

“If the proposed draft law was adopted, we would have had to finance [these rangers] from republican budget instead,” Rysepekov’s letter concluded.

However, some point to what they say are considerable efforts made by the government of Kyrgyzstan in recent years to reform the trophy hunting industry so that it can operate alongside efforts to conserve the natural environment.A new law, “On Hunting and Hunting Management,” introduced in 2014, promotes the allocation of hunting management areas to local communities with vested interests in its sustainable use. Meanwhile, hunting concessions are now leased to legal entities for a period of 15 years, rather than four, allegedly in order to encourage more sustainable business practices.“The hunting industry is helping to conserve wildlife,” said Marat, a hunting guide from Bokonbayevo. “Foreign hunters want trophies to take home so only shoot large males. This actually helps us control the herd sizes while allowing the females to reproduce.”In a more radical move, the government of Kyrgyzstan recently facilitated the transformation of a hunting concession near the capital city Bishkek into a fully protected nature reserve.

The Shamshy Wildlife Sanctuary, which is co-managed by the Kyrgyz government and U.S.-based NGO the Snow Leopard Trust, is home to both Siberian ibex and seasonal populations of argali.

It lies within the crucial snow leopard corridor and proponents of the project say it has the potential to become a key part of their home range if its wild ungulate population can be increased.

It secured an early victory when a number of snow leopards were photographed within just a few months of its launch in 2016. The Snow Leopard Trust is currently using methods like drone technology and camera traps to estimate the size of their population.

As well as protecting the wildlife within its territory, Shamshy will host a field laboratory for snow leopard and biodiversity research, an eco-eduction site for adults and children, and a possible destination for eco-tourism. In doing so, the Snow Leopard Trust hopes to demonstrate that conservation can be a financially sustainable alternative to trophy hunting.

“If this proves to be a successful model then hopefully other concessions will try and emulate it in order to allow their wildlife populations to recover – assuming that at some point these concessions do get over-hunted,” said Charudutt Mishra, executive director of the Snow Leopard Trust.

Mishra admits that the reserve cannot protect the snow leopard on its own. At just 200 square kilometers (77 square miles), it is five times smaller than the average home range of a single snow leopard. In fact, research by the Snow Leopard Trust shows that 40 percent of all protected areas within the snow leopard’s habitat are too small to host even one breeding pair of the cats.

Others however, remain convinced that Kyrgyzstan’s controversial trophy hunting industry will forever undermine efforts to revive its snow leopard populations.

This article by Morgan Erickson-Davis was first published by Mongabay.com on 31 Aug 2017.

We invite you to share your opinion whether trophy hunting in Kyrgystan should be banned? Please vote and leave your comments at the bottom of this page.