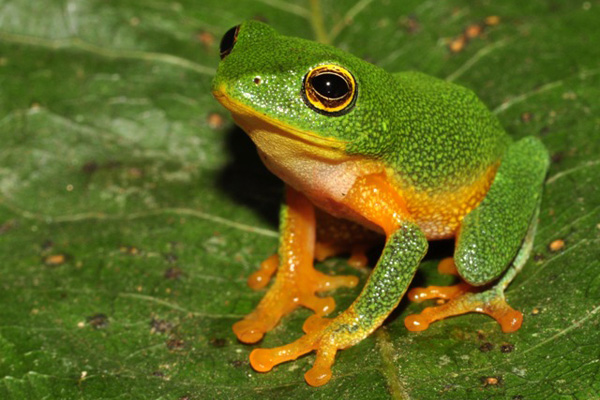 The research, conducted by K. S. Seshadri of Pondicherry University and the Ashoka Trust for Research in Ecology and the Environment, assessed frog communities in logged and unlogged forests in Kalakad Mundanthurai Tiger Reserve, Tamil Nadu. Seshadri found that unlogged forests had twice the density of frogs as areas logged in the 1970s.

“Only a handful studies have examined the effects of such selective logging on amphibians and they all report negative effects. This study adds to the existing body of knowledge on the impacts of logging,” said Seshadri. “If only vegetation regeneration is examined, one would think the forests have recovered from the selective logging. But that would be untrue.”

Seshadri says that frog density has been affected by loss of ecological niches — including degradation of streams and reduction in leaf litter — from logging activities.

“This study clearly elucidates how the effects of logging have persisted on amphibian density and has affected the occupancy of niche and its overlap.”

The researcher, who is now a PhD candidate at the National University of Singapore, says that the results indicate that focusing conservation efforts on single a top-level predator — in this case the tiger — may fail to protect other species.

“The findings from this study suggest that the age old “umbrella” species where the top charismatic animal is protected and everything in the forest is assumed to be doing alright does not really work,” he said.

The paper comes shortly after a review in published in the journal Current Biology concluded that ecologists are underestimating the impact of rainforest logging on wildlife. That study, led by Zuzana Burivalova of ETH Zurich, found that logging intensity was the most important factor in forecasting how much biodiversity is present after timber extraction.

“Selective logging has a smaller impact on tropical forest biodiversity than if we cut the forest down completely. This is part of the reason why many ecologists emphasize that selective logging is, at least on average, relatively benign,” Burivalova told Mongabay.com. “However, as we have shown in this study, depending on how heavily the forest is logged, the impacts of logging are anything from benign to catastrophic. This is something that became apparent only as enough individual studies on logging have accumulated.”